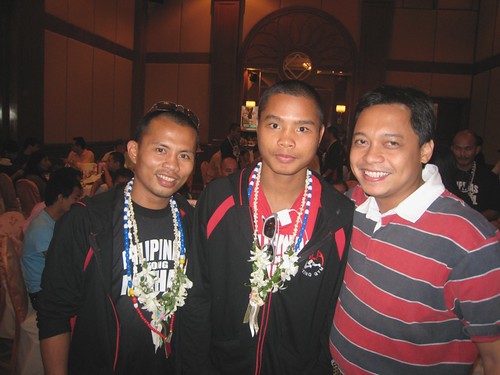 His first fight was at the Gaisano Country Mall. He was one week shy of his 17th birthday. Against an unknown Reyco Compendio, he won that battle in June 12, 2003. Since then, Rey Bautista has gone on to become one of the most celebrated of sportsmen in our island, his popularity as high as a Dondon Hontiveros. He also inherited a striking nickname. One that is defined as “bursting” and “explosive.”

But more than fame or name, Bautista amassed victories on the square dance floor. Since 2003, his first 23 fights all ended with one result: B-B-B raised his arms in triumph. Then, in what was billed as the most momentous clash of his career—the World Cup of Boxing finale against Daniel Ponce De Leon—he lasted a mere 150 seconds in Round One.

That was a long time 27 months ago. Since then, Rey Bautista stood up, recovered, and won his next three fights. But then, last year, against the veteran Heriberto Ruiz, in what was expected to be a victory for the Candijay, Bohol hero, he succumbed to severe head butting and severe punches by the Mexican to lose a unanimous decision. That was 11 months ago.

In summary, Boom-Boom B. won his first 23 fights then lost two of his last five for a 26-2 win-loss record. Hardly, you’d conclude, the caliber of a Manny Pacquiao. But then again, Rey is younger than you and me. He’s only 23.

What aggravated Bautista’s plight was an injury. Quoting the recent Phil. Star article (‘Boom-Boom’ clears the air) of Quinito Henson: “Last February, he underwent surgery to repair the fractured scaphoid – the bone of the thumb side of the carpus that is the largest in the proximal row – in his left hand. The operation was performed by orthopaedic hand surgeon Dr. Tammy de los Reyes at the Manila Doctors Hospital.”

And here’s the truth that’s finally been told: One week before the Ponce de Leon fight, Boom-Boom was stricken with fever; but more than that, he injured his wrist while sparring with Gerry Peñalosa.

Antonio Lopez Aldeguer, who molded Bautista since he arrived at the ALA Gym entrance door seven years ago, was quoted in the same Quinito Henson article, “Boom Boom was already having pains in his left hand when he fought Ponce de Leon but he never told us for fear of having the fight cancelled. He continued to keep it a secret – again for fear that people might say he was using the injury as an alibi for his first round knockout loss to de Leon.”

I spoke to Bautista last Wednesday. In an 11-minute phone conversation arranged by Chris Aldeguer, Rey was in the middle of his workout. I asked how his day went. “I woke up at 5 a.m.,” he said, “then jogged from the ALA Gym to Highway Mandaue to Foodland then back to the gym. I ran for an hour.” Then, he had breakfast, rested, then resumed a three-hour afternoon training that, he says, was “light” and “slow.”

Bautista sounded confident. He’s always exuded confidence. On the phone. In the way he stands upright. In that raised jaw on his face that some consider as arrogance.

I Will Win. That’s the message Bautista projects. When I asked how he’s feeling, he said, “I have confidence in myself. But I don’t want to be overconfident about my opponent.”

That enemy is Marangin Marbun, the Indonesian superbantamweight champion nicknamed, “Dinamita.” Their fight—at the Waterfront Hotel this Friday—will be for the vacant interim WBC intl. featherweight title.

Here’s the contrast between the two: While Bautista has been inactive, Marbun has not: five times he’s fought this 2009 and, though his record is an unimpressive 19-5-1 (7 KOs), he has not lost in his last eight encounters. And we know how dangerous an active fighter is versus one who’s making a comeback, right?

So, the questions are asked: Which Bautista will show up? After nearly a year’s absence, will he be rusty? Does he have the backbone to be a future world champ? Or, after too-blistering a start in his career, did the two defeats leave him too demoralized? Does he still have the impact, the muscle, the wallop, the strike—the so-called “Boom-Boom?”