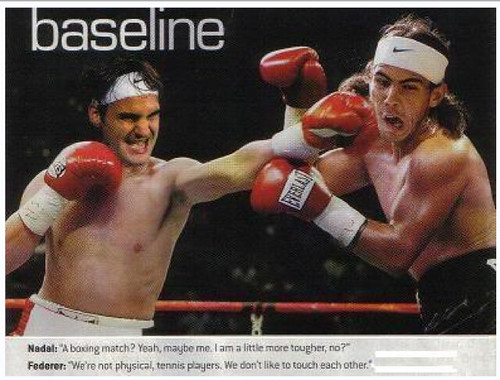 It’s the US Open! What’s my biggest tennis wish? That two 6-foot-1 Nike endorsers will meet in the finals. You see, every time Roger Federer and Rafael Nadal meet, it’s like a Pacquiao-Mayweather fight. It’s like the Lakers vs. Celtics, the Yankees vs. Red Sox, La Salle against Ateneo. It’s a blockbuster movie. Only this time, it’s not reel but for real.

My opinion? It won’t happen. Rafa was injured and out of the ATP Tour for two months. That’s like asking Charice Pempengco to tape her mouth for 12 months. She’ll rust. And, yes, Rafa is rusty. Mr. Federer? Ah, he’s far from dusty. Like a gleaming Rolex watch that he wears on his left wrist, the Swiss is glossy and sparkling.

Looking back 12 months ago, would you believe that, as the ‘08 US Open started, most tennis experts had called for Roger’s demise? (Me included.) Last year, he lost the Australian Open and, at the French Open and Wimbledon, he lost to Rafa. The same with the Olympic singles gold medal. It was Rafa’s. Roger lost. He was lost.

Then, like his stinging forehand that he whips out of his magic pocket to score a winner, Roger won the 2008 US Open title. Fast forward to Paris and London a few months ago, he also wins the twin majors plus, as added bonus, a pair of twin girls named Myla Rose and Charlene Riva.

Today, Federer is not in Cloud 9—he’s floating in Cloud 15. That’s the number of Grand Slam singles titles he’s amassed.

Call it “Love-Fifteen.” Roger loves 15. Will it be 16 next weekend? I bet my dog Bruno it will. A five-time US Open winner—consecutive, I might add—I can’t see anyone beating the Swiss in New York.

Rafa? He’s still sluggish. Djokovic, the No.4 seed, has not gone past the quarterfinals of the past three Grand Slams. There’s Tsonga, Verdasco, Monfils—but they’re all chess pawns to The King, Roger.

Andy Murray is the only one I see threatening RF. The two met in last year’s US Open final and, since that Roger win, the Scot has beaten the Swiss in four of their last five encounters. Murray has gotten slimmer, fitter, stronger. He has excellent hands—notice his unexpected drop shots, his effortless underspin backhands, how he moves opponents left to right like a Honda Jazz windshield wiper.

Back to the Rolex star, here’s one essential fact to remember: Roger has rarely been injured. Do you recall the last time he was sidelined for injury? I can’t. (He had mononucleosis but that’s possibly due to… someone he kissed?)

Roger has remained almost injury-free throughout his career. Compared to Nadal who, at only 23, is suffering from knee tendinitis. The reason is obvious: Rog is uncomplicated and smooth while Raf is laborious and excruciating. The former results to less injuries; the latter, well, eight weeks off the Tour.

I saw this for myself. At the Beijing Olympics last year, my wife Jasmin and I had the chance to sit on Row 2—meters away from where R & R played separate opponents. With Rafa, you can see the muscles flexing; he’d jump, scramble, sprint, flick his wrist like it would snap. He’s too physical—and too likely to get injured.

Roger is a ballerina on rubber shoes. He doesn’t run, he skates. Glides. He hovers. Waltzing around the tennis rectangle, he skims. Sails. He tiptoes.

The result? His body’s not battered. Plus, by next Sunday, the Daddy will carry his 6th US Open trophy.