After all the lechon, Queso de Bola, sweetened ham, cookies, dinuguan, spaghetti, brownies, Leona pastries, chicken relleno, fruit salad, and Marco Polo buffet that you’ve devoured the past two weeks, it’s time to join the one event that will guarantee to make you sweat: the Mizuno-Asia Miles Sinulog Half-Marathon ’09. 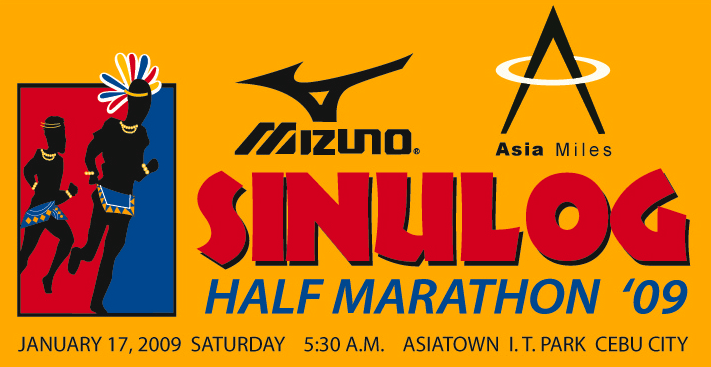 The schedule? It’s next Saturday, January 17—the day before Sinulog. Why that date? Well, considering that we’ll be gorging on more of the above-mentioned food during Cebu’s grandest mardi gras—why not run and perspire the day before? The Sinulog Half-Marathon will be sizable and crowded. Picture a thousand pair of running shoes pounding our cemented roads. In different colors and running with different strides, they’ll be parading the roadway. Two categories are offered to all runners: a 5K race that’s perfect for “fresh” runners (read: new to the sport) like my sports editor, the newly-married Mike Limpag. The 5,000-meter run will commence at the I.T. Park, turn right to Salinas Drive, make a left-turn upon reaching JY Square, head down to UP Lahug then make a U-turn back to the I.T. Park. It will be effortless, a cinch, easeful and—running and walking beside hundreds of others—is guaranteed to be Sinulog-like festive and lively. That’s the 5K. There’s also the Half-Marathon. This one is ideal for those who’ve been running 5Ks and 10Ks. A distance that’s not often offered to Cebu runners, this will be a suitable time to run farther. The route, starting at the I.T. Park, will weave runners to the Capitol, down to V. Rama, up to B. Rodriguez, around the Fuente Osmeña circle, straight to Osmeña Boulevard, running past Mango Ave., down to Imus, down to the reclamation area, straight to SM City, turning to Juan Luna Ave., snaking through Banilad before returning to the I.T. Park. Dreadful? Fearsome? Excruciating and tormenting? Yes and no. If you’ve been running 10Ks on a regular basis, the answer is No… it won’t be a laborious morning. But, if your farthest distance is 3,590 meters and you’ve been jogging for only 17 days, don’t ever, ever attempt a 21K. The Cebu Executive Runners Club (CERC), one of the (if not THE) longest-running running club in this city, is organizing this yearly event. Last year, runners spanning Manila to Davao joined. This year, we expect the same out-of-town participation—plus a bunch of foreigners (here for the Sinulog weekend) to hop in and run. What’s best is this route was certified last year by the Philippine Amateur Track and Field Association—which means that, unlike several events in the past where the distance is questionable, this one is PATAFA-certified. Prize money is P10,000 each for the men’s and women’s winners. The runners-up receive P7,000; third place, P5,000… and so forth. And, for professionals, there will also be an Executive division. Who can join? Anyone and everyone. For those who’ve long wanted to join their first-ever run (like Dr. and Mrs. Ron Eullaran), this event is fitting. For the likes of Mendel Lopez and Leszl Gitaruelas, the former King and Queen of Cebu running, this is perfect. And, for those joining the Hong Kong Marathon this February 8—like brothers Jonathan and Jerry Guardo, and Joel Garganera and company—what better time to train for their 42K? Registration fees are P150 (for the 5K) and P250 (21K) and, apart from the experience of running Cebu’s grandest run, you’ll receive a singlet (5K) and T-shirt (for the half-marathoners). Registration is now going-on at the Cebu City Sports Center (at the PSC office) and at the Sug-Angan Restaurant along J. Llorente St. Or you can call 254-8096 or 0917-5251259 and ask for the CERC president, the four-time marathoner, Jesse Taborada.