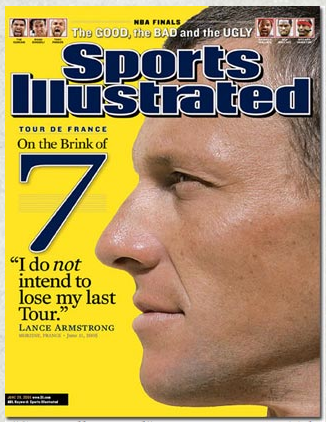 Ask me for my shortlist of five all-time sporting greats and this I’ll answer: One is currently the world’s No.1 pound-for-pound boxer, the other got knee-injured in golf but is now recuperating; the three others are long-retired: there’s a forehand specialist named Pete, a slam dunk champion first-named Michael and a cyclist who should have died in 1996. You all know them, right?

Well, here’s the good news. One of those three retirees is coming back…

The last retiree? A man who sits down to sweat for a living? Who was diagnosed with testicular cancer and a germ cell tumor that metastasized to his brain and lungs and was given a 30 percent chance to live?

Well, live-strong he did: Lance Armstrong stood up from that hospital bed in 1996 with knife-scars tattooed on the scalp of his head; he walked, rode a bike. A few years later—in 1999—he joins the Tour de France…. and wins. Seven straight times he wore the yellow jersey when the herd of human-machines named cyclists landed in Paris. Seven consecutive times, the Texan was crowned the King of French Cycling. 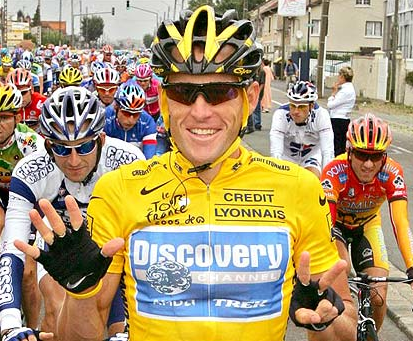 To me, one who’s followed sports since I could read, the 1999 to 2005 victories at the Tour de France by LA was the greatest saga in the History of Sweat. That was 2005.

Well, well. Just when we had forgotten about Armstrong The Cyclist, guess what? He’s back!

Lance, if we forget, never disappeared from tabloids the past three years: He’s dated Sheryl Crow, fashion designer Tony Burch, actress Kate Hudson, and, would you believe, even fell for a girl 15 years his junior: Ashley Olsen. And, of course, the latest news fresh from the tabloids oven last week: LA is expecting a baby with his current handle, Anna Hansen.

Enough of tabloid nonsense, Armstrong The Athlete busied himself by running three marathons in three years: In 2006, he finished the New York Marathon in 2 hours, 59 minutes. The year after, he ran 13 minutes faster in 2:46. Last year at the Boston Marathon, he ran an impressive 2:50. (For someone like myself who, just last month, ran the Singapore 42K and clocked the same time, except the numbers are interchanged, 5:20—that’s extraordinary.) 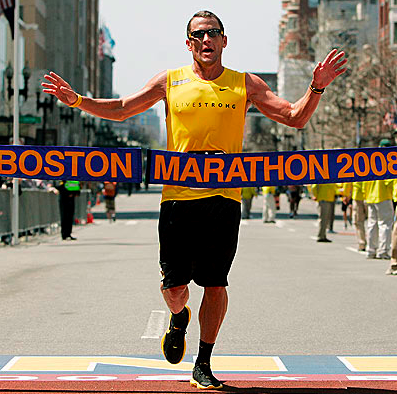 Back to Lance’s 2009 plans, he’ll race the Tour Down Under this January 18—the first time he’s racing in that part of the world. Which prompted the South Australian Premier Mike Rann to declare that LA’s participating is the biggest sporting event in the state’s history. Bigger, he says, than the first F1 Grand Prix in 1985, bigger than the AFL premierships for Port Adelaide or the Adelaide Crows and bigger than any of the state’s Olympics triumphs. That’s big news.

But the two biggest events Lance will be joining? One is the Tour de France in July, cycling’s version of soccer’s World Cup, tennis’ Wimbledon or American football’s Super Bowl. But prior to the TdF, Lance is racing in the second most famous road race: Giro d’Italia. From May 9 to 31, this year will mark the 100th anniversary since the first Giro—a fitting race for LA. Covering 21 stages, it will start in Venice and finish in Rome.

Armstrong will compete in both the TdF and Giro and, remarkably, has opted not to receive any form of salary or bonuses. Plus, as further testament to his “I’m Drug-Free” campaign, he’ll post his internally-tested blood results online. 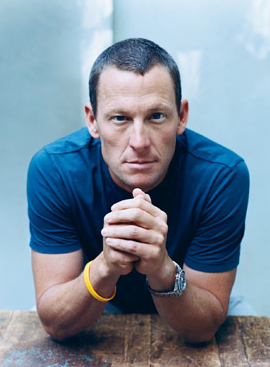 Questions abound: Why? What for? Wasn’t seven enough?

The answer, if we all reflect deeper, is simple: Once a superman athlete has reached and perched himself at the summit, it’s hard, when he’s back down the city, to keep staring at the top from below. And so… he climbs back to Mt. Everest.

That’s Lance. But, can he win No.8? Beat youthful 23-year-olds? Vanquish the Manny Pacquiaos of his sport?