Raffy Uytiepo—my fellow columnist, fellow Ilonggo, fellow runner and, yes, fellow injured man (we both own knee injuries)—gifted me with a book last week that, after reading it’s hysterical and brilliant quotations—got me snorting and laughing. Ironically, the 246-page book’s title, “Tennis Shorts,” was my original by-line when my first-ever column appeared (for The Freeman) back in Sept. 21, 1994.

Compiled by Glenn Liebman and fully-titled, “Tennis Shorts: 1,001 of the Game’s Funniest One-Liners,” it was copyrighted in 1997—which explains the absence of Rafa and Roger. Enjoy these tennis shorts… 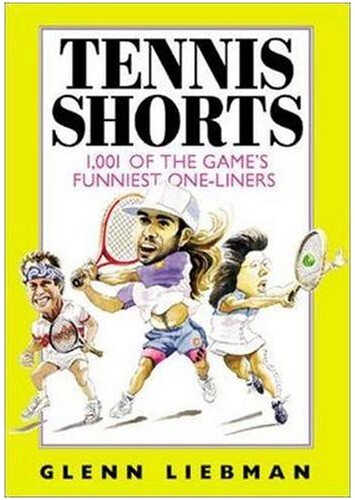 “Got to let one rest and be fertilized while I’m using the other.” – Bill Cosby, on why he has two grass courts at his house

“Grass is for cows.” – Jan Kodes, on his disdain for grass

“Short girls who take all the tall guys.” – Lindsay Davenport, 6’1”, on what annoys her

“It’s a lot harder than tennis. If I make a mistake, it’s like 0-15. In boxing, you let your head down once and you’re in the hospital.” – Andrea Jaeger, comparing boxing to tennis

“Deuce is used so you don’t have to count so high.” – Bill Cosby

“Every day two million Americans play tennis and one million of them lose.” – Vic Braden

“The best players, I think, are always the ones who remember their losses, because they remember the pain and they hate it.” – Billie Jean King

“My uncle always described an unforced error as his first marriage.” – Bud Collins

“Tennis is like marrying for money. Love means nothing.” – Phyllis Diller

“I’m trying to be a good guy, and I’m not that good a guy.” – John McEnroe, on attempting to stop his tantrums

“I’m trying to kick your ass. In a nice way.” – Pete Sampras, on his on-court philosophy

“Writing free verse is like playing tennis with the net down.” – Robert Frost

“I could play to 90 percent of my potential and still win most of my matches against the other players. With Martina (Navratilova) and me, whoever wins has to play 100 percent.” – Chris Evert

“Watching Connors and McEnroe play was a little bit like watching the Indianapolis 500. You know that a good portion of the crowd was there not to see them play, but to explode.” – John Feinstein

“His left wrist is so strong that he’d knock his own teeth out if he didn’t brush them right-handed.” – Bud Collins, on Rod Laver

“He doesn’t cook well.” – Michael Chang, asked if Pete Sampras had any weaknesses

“He offers more shots than a bartending octopus or an allergist.” – Bud Collins, on Sampras

“I hate the second serve. If you don’t get the first one in, it’s a mulligan.” – Chi Chi Rodriguez

“I’m a professor in the school of how to break the racket.” – Goran Ivanisevic

“If I don’t get mad sometimes, I can’t play. It’s like sitting at a table and watching the other guy eating. I don’t like it.” – Ilie Nastase

“I know being a linesman is a thankless job, especially with guys like me around.” – John McEnroe

“Disgrace to mankind.” – McEnroe, after yet another bad call

“Regardless of what John McEnroe once told an umpire—the F word in tennis is still fun.” – Bud Collins

“Tennis and golf are best played, not watched.” – Roger Kahn