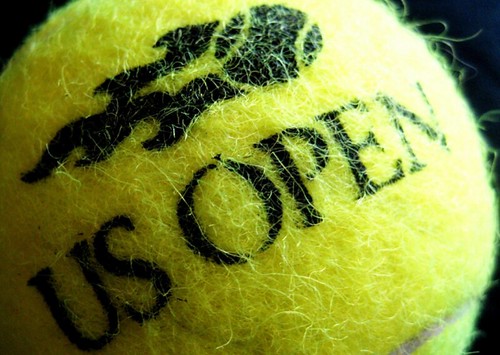 One week has passed, eight days remain. To me, among tennis’ four Grand Slams, nothing is more riotous, whopping, lively, and earsplitting than the US Open.

Nine Augusts ago—back in 1999—I was lucky to have stepped inside Flushing Meadows together with my dad Bunny and another father-and-son tandem, Paquito and Fabby Borromeo. What we saw was everything oversized: massive crowds, colossal stadiums, larger-than-life players—a Slam unlike any other.

Take Roland Garros. While the French speak a different tongue, drink champagne at side-streets and swing racquets on clay, in New York it’s brash, trash talk, Budweiser beer and the US Open hard-court.

Meanwhile, down in Melbourne, the Australian Open’s largest venue—the Rod Laver Arena—seats 14,800. That’s huge. But here’s a titanic coliseum: the US Open Arthur Ashe Stadium’s capacity of 23,200. (I recall, in that ’99 Open, Fabby and I watched Andre Agassi beat Todd Martin in the final from the very top of the stands—the same view from, say, the 7th floor of the Marco Polo Hotel!)

Wimbledon? Ahhhh…. think of players clothed in all-white and linesmen who don coat-and-tie apparel from Ralph Lauren. The US Open? Haaaa! It’s shirtless, screaming fans who holler, stand and pump fists in between points.

Located in New York City—the most multi-racial and diverse city in the world that is home to the Statue of Liberty, Broadway, Fifth Avenue and 8.2 million people—you can say that this Open is, yes, truly open.

Including the topic, “Who’ll win?”—that’s an open question.

There’s a new men’s no.1, a new no.2, the no.3 won the Oz Open, there’s past winner Andy Roddick, there’s Briton Andy Murray—and that’s only among the men. With the women, Maria Sharapova is out with a shoulder injury, the Williams’ might meet early in the quarters and, the biggest shocker of all, beauty queen Ana Ivanovic was shocked in Round 2.

With Rafael Nadal, what a season thus far. If he wins next Sunday, it will be one of history’s most commanding seasons: a win on clay in Paris, on grass in London, on cement in New York. And while Roger Federer achieved three Grand Slam wins per year three of the past four seasons, that once-every-four-years event named the Olympics is the big plus for Rafa.

Can RN do it? Win in NYC? Right after his ascension to the No.1 spot? Maybe, maybe not. But the record is against it because, since the ATP computer rankings began in 1973, only two of the 23 men who’ve moved to No.1 won the next major: Jimmy Connors (’74 US Open) and Jim Courier (’92 French).

Why is it so hard to win a major after reaching tennis’ Mt. Everest? Well, to start with, it’s hard to win a major. Plus, the added hoopla, the additional pressure—those are factors that add to the mix and make the quest more difficult. But then again, if there’s one Superman who thrives—no, desires—pressure, it’s SuperRaf.

Roger Federer? At the Beijing Games, here’s what he said prior to the start: “If maybe I am a player who doesn’t have any Grand Slams, maybe a Grand Slam would still do more for my career. But because I have 12 already, for me an Olympic gold ranks as high, you know?” So given that he lost to James Blake in singles, had he not won that gold medal with Stanislas Wawrinka, he’d have been wrecked—especially after seeing Rafa win. But he won gold (never mind if it’s doubles) and so that lifted his confidence.

Will RF win the Open? The betting is Yes. You don’t win 4-out-of-4 and not be declared The Favorite. So he is, even though you see his name at the bottom-most of the draw, the one expected to win.

But some complications arise: Novak Djokovic is in his half of the draw. Same with Roddick. Here’s what I predict it will go down to: how fresh (or, tired) is Nadal? After all his traveling (from the US to Beijing and back in two weeks), his body’s exhausted. Because if Rafa is vigorous and crisp (I hear he’s playing golf in-between matches, a testament to the “healing powers” of golf), then another R & R finale is to be expected with Mr. R, the Spaniard, winning a close Open.