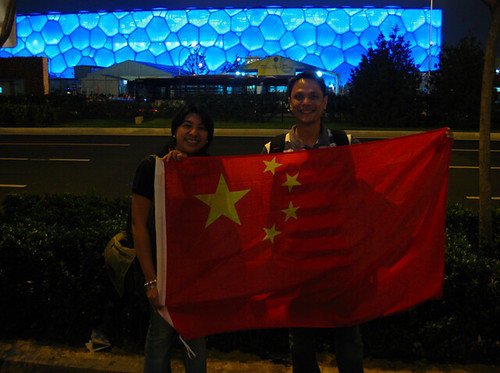 Two nights ago wasn’t the Closing Ceremony—that was a party. After 16 days of glitch-free Olympics that showcased world-class venues and introduced the warmth of the Chinese army of 1.5 million volunteers, the XXIX Games ended the way it began: with fireworks. For who, but our giant neighbors, can invent pyrotechnics that form the five Olympic rings on air? Or, at the program’s start, show the numbers “9,” “8,” “7,” all the way to “1” using the black night as canvas and fireworks as the paintbrush?

What a celebration! Compared to the formal walk of the 10,000-plus athletes during The Opening, the other night was a reggae, a fiesta, a gala, a carnival. When the Olympiads were called, they paraded inside the Bird’s Nest with no sequence, like little ants, mixed among nations, embracing, arms-locking, many donning gold medals on their necks.

Jackie Chan sang. The song “Beijing! Beijing!” one of my favorites after hearing it play at various loudspeakers last week at the host city, reverberated inside the stadium. And, with their penchant for pageantry, the Chinese unveiled a 30-ton centerpiece of steel that towered five stories tall. Called the “Memory Tower,” it loomed at the centerfield while acrobats waved and formed a “human flame” that, organizers say, “will burn and never be extinguished in people’s hearts.”

The Closing wasn’t only China’s soiree party—it was also London’s. The 2012 hosts, they were given time to perform and, in stark comparison to the Opera-like voices of the Chinese, the British rocked ‘n rolled. When all lights were shut off and the arena turned dark, the spotlights zoomed on a moving object: a double-decker London bus.

Representative of the cosmopolitan city teeming with thousands of such twin-level buses, the red bus drove to the center until out emerged British singer Leona Lewis and former Led Zeppelin guitarist Jimmy Page. Amidst the heavy-metal sound, I presumed Chinese President Hu Jintao did one thing: cover his ears at the excessive noise!

Then David Beckham appeared. On a popularity scale on the same level in China as Kobe and Yao Ming, Beckham didn’t sing—thankfully not—but did carry a much bigger microphone: a soccer ball.

Minutes after, the mayors of both cities stepped onstage. And what a contrast: Beijing’s Guo Jinlong was, as expected of China’s top brass, restrained and serious, while Boris Johnson, London’s mayor, had his coat unbuttoned and shambled out to the stage at so casual a stroll that he had both hands inside his pockets. With his crop of blonde hair—he waved the Olympic flag like a college cheerleader—he was the perfect opposite of the Chinese. And what an Olympic contrast it will be 48 months from now: control-hungry China versus the open society of Great Britain.

At the Closing, one other activity I’ll mention. Among the 958 medals doled out in Beijing, only one was awarded last Sunday night: the marathon. Won by Kenyan Samuel Wanjiru, 21, (who joined only his third-ever 42-K… would you believe that), what a prestige event the marathon. Part of the 1896 Olympics, it just symbolized that, indeed, the marathon is unlike any other event.

Jacques Rogge, the IOC president, how did I find his speech? In one word: uninspiring. Although better than, say, boring the crowd with a 40-minute-long discourse, the Belgian didn’t say anything of substance. That was a chance—with billions watching—to make an impact. He could have been more specific (citing Phelps or Bolt), spoken more of the world’s conflicts (Georgia vs. Russia and how their athletes embraced), or praised the Chinese more (with their haul of 51 golds or, as Juan Antonio Samaranch does, calling the Games “the best ever”). He didn’t.

Finally, our TV channel RPN promised to show the Closing at 8 p.m. Well, the two-hour-long show s-t-r-e-t-c-h-e-d—no thanks to dozens of KFC, Motolite, Smart and many more advertisements—until it finished at 12:30 in the morning!

“One World, One Dream, One Network,” RPN proclaimed. And let me add, “One Loooooooooooong Show.”