His name is Jean Henri Lhuillier. He used to own the Cebu Gems but no longer spends tens of millions on basketball. He is, by heart, Cebuano though he’s lived most of his adult life in Manila. His strongest passion—next to family and business—is this six-letter word that has implanted the name “Lhuillier” among the minds of the 81 million who reside in this country: Sports.

JHL, to put it mildly, is devoted to sports. He’s watched the French and Australian Opens. During college in America, for two years he played the highest-level Division I varsity tennis. Plus, we know that his company bankrolled the week-long Cebuana Lhuillier Men’s Open that concluded yesterday.

Softball? Sure. On Sundays, he swings the bat with friends and, because of his personal fun catching the zooming white ball, he became president of the Amateur Softball Association of the Philippines (Asaphil). And, of course, he married one of our country’s top athletes of all time. The only Filipino, if I’m not mistaken, to win an Olympic medal in two sports, gymnastics and taekwondo. Her name is Bea Lucero.

Last Wednesday, I had the opportunity to spend a few hours with Jean Henri, whose dad Philippe, the RP Ambassador to Italy, is the brother of our well-known sports patron, Michel Lhuillier.

Ever the sportsman, Jean Henri arrived at Baseline not wearing coat-and-tie after finishing his business meetings—but in an all-Adidas attire: T-shirt, shorts and a pair of three-striped tennis shoes. He watched the men’s doubles, clapped, stared at the men’s draw, received updates from organizers Jun and April Toledo, then shook hands with the players, including Niño Alcantara, the 16-year-old world no. 70 junior.

Apart from tennis-talk, Jean explained to me his involvement in softball; how our RP team narrowly missed joining the Beijing Olympics and he described the difference between softball’s “soft pitch” and “fast pitch.”

Then, after an hour of watching and chatting, it was time to go. We met at the Casino Español where, for the next half-an-hour, Jean Henri warmed up in tennis. His topspin forehand and backhand drives—as a fellow player, I must say—are Class-A. And when the ball accidentally ricocheted off his racquet and banged his eye, he stopped, asked for ice, then played-on—never complaining.

For here’s what I’ve learned about Jean Henri: Though he’s a multi-millionaire businessman who drives a white Porsche and wields power as CEO of his multitude of Lhuillier-owned companies, he’s also this: no-nonsense, relaxed, easy-to-get-along-with, humble.

Take our fellowship dinner that night at the Mr. A Restaurant of Alvin Alazas. After the 30 top netters gorged on lechon, chicken lollipop and dinuguan, Jean Henri stood up. No, he wasn’t going to deliver a speech. He lifted a bottle of Jim Beam and started pouring its contents on empty shot glasses. To the surprise of the players, he played bartender. He mingled with them. Laughed when 48-year-old Jessie Lapore told jokes. He beamed an ear-to-ear grin when congratulated on his win earlier that day with partner Jun Toledo against Lapore and Randy Villanueva. 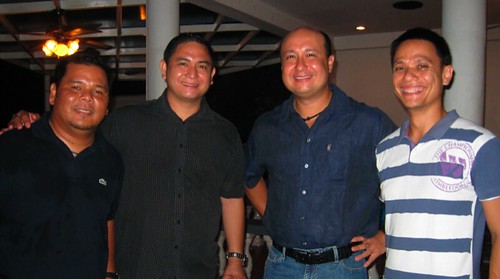 Jean Henri, a business colossus, was one of the boys. Unlike others of his stature who’d insist on being addressed as “Sir,” in our many tables, he was merely called “John” (how his name is pronounced). And finally, when the players that night pleaded for him to move his next Cebuana Lhuillier Men’s Open from Subic to the nearby Bisaya-speaking Bais (in Negros), he paused, pondered for a few moments, then nodded his head. “Let’s have it in Bais!” he declared.

A Filipino of French origin, we are proud to call Jean Henri a fellow Cebuano.