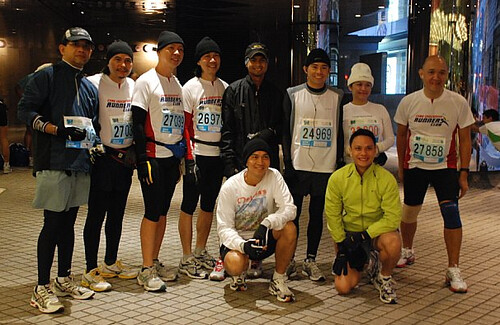 At 7 a.m., our Cebu team huddled at the Kowloon Hotel lobby, posed for pictures with the RP flag, wished each other good luck, then, all in unison, we sang, “HAPPY… BIRTH… DAY… TO… YOU…”

Meyrick Jacalan, who turned 37 when the clock struck midnight last Sunday, grinned from ear-to-ear as we serenaded him at the hotel parking area. 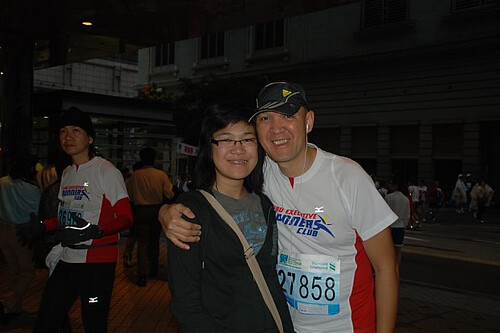 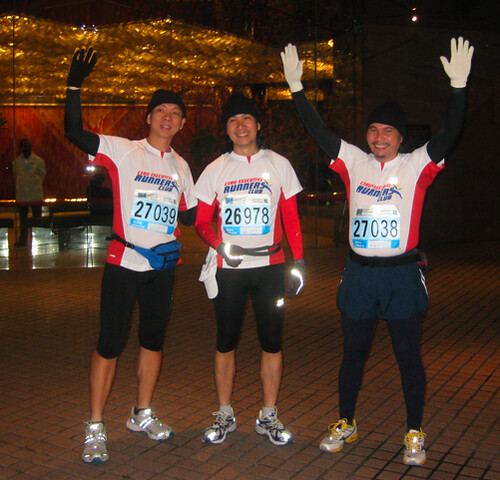 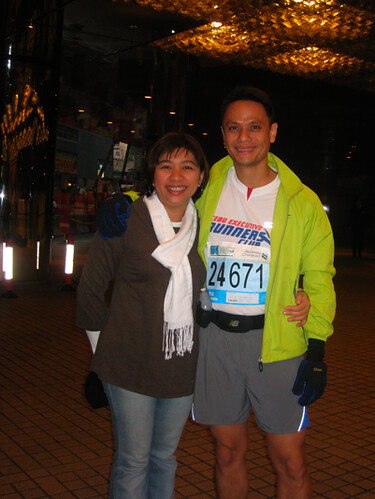 With 15 minutes left before the 7:45 a.m. start, we walked along Nathan Road to the starting line at the Miramar Hotel. Goosebumps filled the moment as thousands crammed the narrow road, all jittery and heart-pumping. Then, finally, a giant horn roared as shoes trampled the asphalt—we were off! 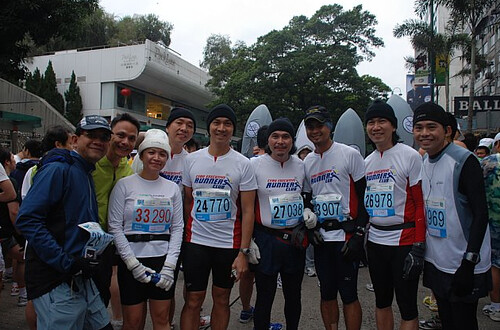 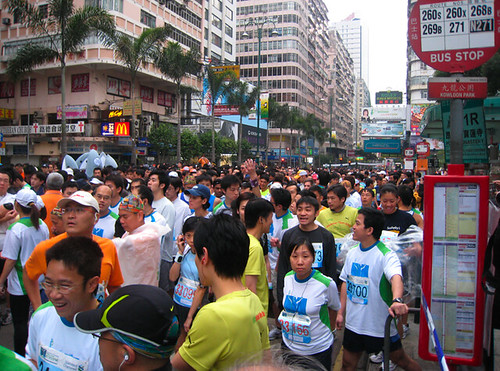 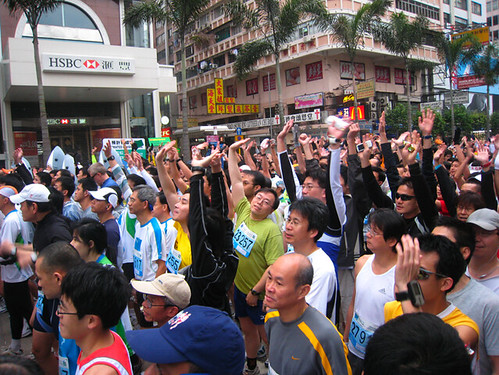 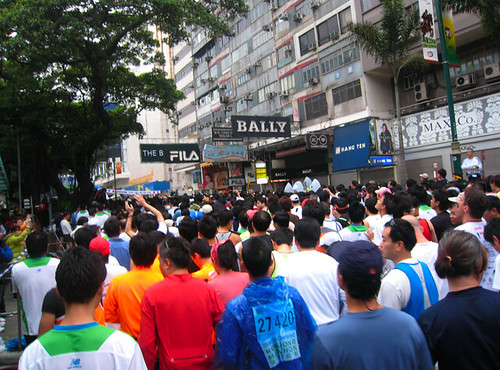 Running alongside 6,289 runners doesn’t happen daily. And it’s not easy. You watch the person in front of you, at your right, left, and check the road to avoid those protruding, reflector-laden road marks.

Before the start, we Cebuanos were bunched as one. But as the race began, we got divided into splinters. I ran with Jesse Taborada, a veteran of three marathons, including the famous Tucson, Arizona Marathon.

While running, I asked Jesse, who had brought along this trip his wife and two daughters, “How was Disneyland and Ocean Park?”

“I rode the The Abyss ride yesterday at Ocean Park and I didn’t like it,” he replied with a smile.

With all the stored energy, the first five kms. was a breeze. So was the next five. And more. We passed through their winding highway and smelled to enjoy the cold, 16-degree weather.

The Standard Chartered Hong Kong Marathon, now on it’s 11th year, is, without question, world-class. Not only are Kenyans and elite marathoners visible, but the organization is superb. Prior to the start, you’re given a New Balance T-shirt, a commemorative medal, a Runner’s Guide. And, along the route, you’ll find all that you need: Watson’s-supplied water and sports drinks, sponges, linaments, km. markers, and the entire roadway completely blocked off from vehicles.

The drawback? Lots of climbs and down-hills. You enter the tunnel and run down then climb back as you exit. The two bridges—Tsing Ma and Ting Kau—are scenic but also wear runners down. There are flyovers, more tunnels, sloping highways, more climbs.

At Km. 12, Dr. Vic Verallo (another long-time runner and finisher of two marathons) joined Jesse and myself. By the 21-K midway point, somewhere atop one of the bridges, our time was 2:08. Not bad. Considering that the first half of the race was where the climbs and downhill descents were mostly stationed.

Dr. Yong Larrazabal led all Cebu runners. While we were descending the bridge before the U-turn, Dr. Yong was on his way up—around 10 minutes ahead. Next to us were Meyrick Jacalan and Ted Tecson. The others that followed included three doctors—Peter Mancao, Albert Santos, and Nicole Chua—plus Serge Amora.

Finally, at past 12 noon last Sunday, it all concluded. Though wearied, muscle-fatigued, and walking like zombies, we high-fived. As expected, Dr. Yong Larrazabal finished fastest: a personal best (PB) of 4 hours, 19 minutes. Dr. Vic Verallo did his PB, clocking 4:34. Ted Tecson (who ran his first two years ago at our Sinulog Marathon) did well at 4:48. Meyrick Jacalan, the first-time marathoner who took up running only half-a-year ago, clocked 4:51. The rest of the Cebuanos all did well, finishing within the cutoff time of 5 hours, 30 minutes.

At the Victoria Park finish line, littered with thousands of runners, spectators and, yes, on Sunday noon—Filipinos—we raised our weary arms in Hong Kong. 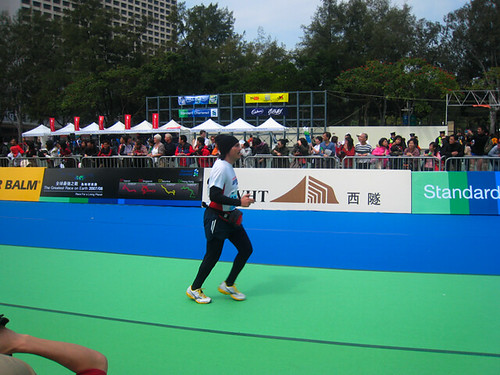 Jesse Taborada near the Finish Line 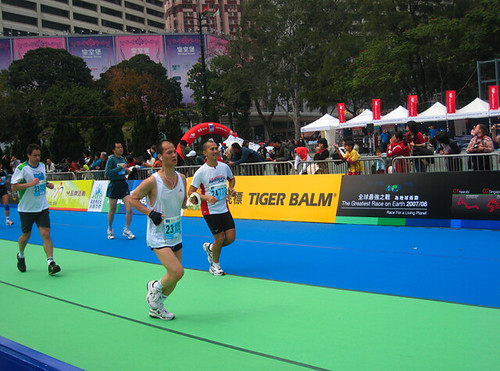 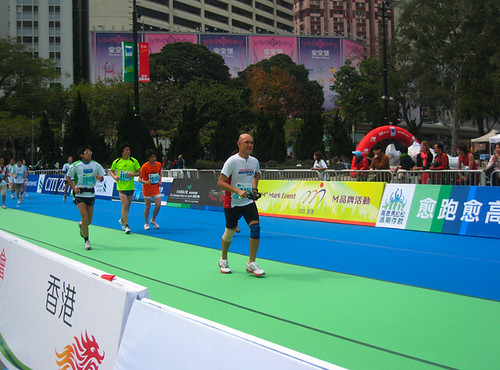 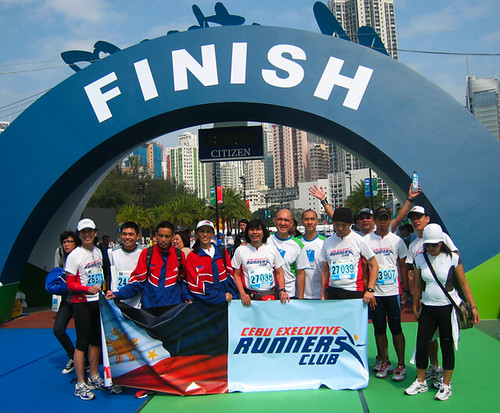