Each morning after exercise, I flip open my laptop, click on the Safari web browser, and visit websites all lumped under the same theme: Sports.

I visit about two dozen. CNNSI. Fox Sports. MSNBC. Tennis.com. I read about whether Roger Federer has lost to David Nalbandian again (he has, twice). I await the fresh arrival of columns penned by my favorite scribe, Mitch Albom. I search for news about marathons—and yesterday, gazed at the sight of a bra-less Katie Holmes at the New York City Marathon.

Here in the Philippines, is there one website that stands tallest? Yes. And, best of all, it’s Made In Cebu…. PHILBOXING.

Run by Dong Secuya and Salven Lagumbay, www.philboxing.com has emerged as the undisputed champion among RP’s sports websites.It’s updated with several stories each day (many of them original write-ups by Salven), it’s loaded with photos (plenty of high-resolution shots, courtesy of Dong), it has forums and ratings and a fully-stocked database on just about every Filipino athlete whose hobby involves wearing red gloves and biting a mouthpiece. 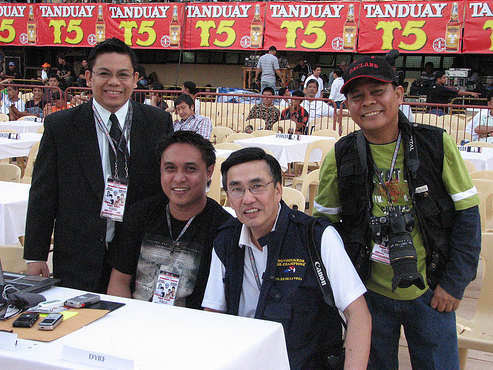 Want to follow the training of world champ Nonito Donaire? It’s there. Want to read an interesting topic named “The Importance of a Professional Grade Mouth Guard?” Click on Ed de la Vega’s expert advice. Want to study the “Origins of Boxing in the Philippines?” Yes, that, too, is found there.

“We had over 25,000 hits in Pacman’s fight,” I recall Dong Secuya telling me a few months ago. Twenty five thousand visits? In one day?

You see, with internet usage rising—and DSL rates dropping—more and more Filipinos are reading news online. And since boxing today has rivaled basketball as our No.1 sport, then where do we head to for news about Donnie Nietes, Boom-Boom or AJ? 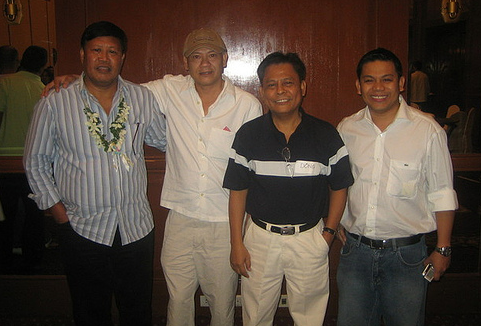 I’ve known Salven Lagumbay long before he became the top boxing writer of the Philippine Daily Inquirer and Cebu Daily News. I knew him before he started hobnobbing with Oscar de la Hoya, before he was awarded last year as “Asia-Pacific’s Boxing Writer of the Year.”

Salven and I were best friends in college. At U.P. Cebu, we took the same Business Management course. And though I was one batch higher, we were often classmates. And here’s a secret I’ve never divulged before: Salven helped me “catch” my wife, Jasmin Mendez.

Pardon the sidetrack, but in one of our final subjects at U.P., we were asked to form a three-person team and do research. What plan did I concoct? I sought the help of Salven and asked him, “Bai, can you ask Jasmin to join us?” He did. She agreed. And the next thing we knew, months later, Jasmin and I told our group mate that we were “going out.” So there: Salven helped “broker” my marriage.

Today, Salven is one of the most recognized names in RP boxing. Nonito “The Flash” Donaire here at the ALA Gym? I recall no less than Antonio Lopez Aldeguer saying last week: “Salven called me and asked if Nonito Donaire can train in my gym. I said, ‘Of course!’ We would be honored.”

Manny Pacquaio, the newest writer at Philboxing? I’m sure it was Salven who convinced his friend to write his thoughts.

Dong Secuya is not to be outdone. He is the first website developer in Cebu. Long before you and I had heard of the uses of “www.” and “.com,” Dong was busy tinkering with websites. And so today, in Cebu, Dong is one of the foremost website developers. 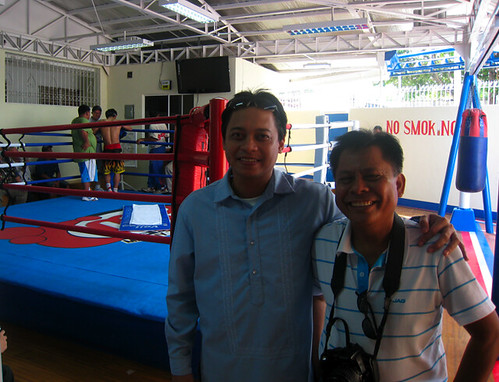 Dong (right) with Atty. Jingo Quijano and you-know-who working out at the background

Philboxing, lest I forget, is not the only site the two manage. There’s also www.mannypacquiao.ph, otherwise known as PACLAND… “where PacMan fans around the globe congregate.”

How influential are these websites to boxing? “Philboxing is one of the top 10 boxing websites in the world!” Tony Aldeguer once told me. “And I know Oscar de la Hoya and Bob Arum visit the site all the time.”

You see, the Philippines is a world boxing champion in another arena—cyberspace. Thanks to the one-two combination of Salven and Dong. 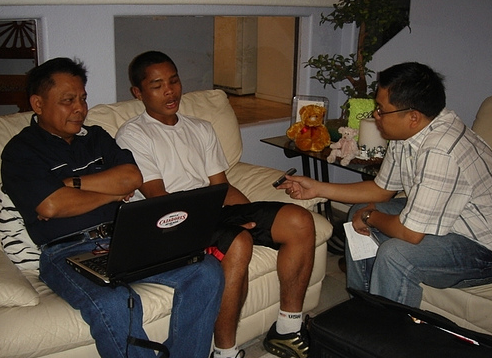