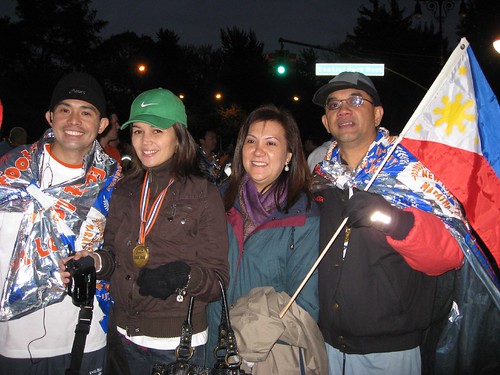 Those were the exact two words first uttered by Dr. Peter Mancao when I called him in New York yesterday at 7:40 p.m. (NYC time)—just four hours after he had finished running last Sunday’s 42.195-km. race called the ING New York City Marathon.

Then, he laughed. “Never again?” I checked if he was serious. “Dili na ko mo usab,” he answered. “Sakto na to!” Then again, he laughed. Joking or not, this he added in all seriousness: “It was an unbelievable experience. Painful, very painful… but really, really worth it. It was also very humbling. But the crowd, grabe… murag Sinulog!”

Dr. Mancao, together with his wife Sophia, flew to New York on Monday last week not to attend a conference of cardiovascular surgeons (as he does, when he travels abroad) or to visit his five siblings (who all reside in the U.S.)—but to join his first-ever marathon.

I asked how his body felt after the punishing 42-K which he finished in 5 hours, 35 minutes and 47 seconds. 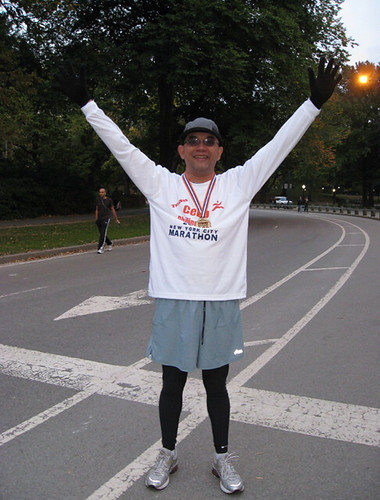 Then Peter (above photo) handed the phone over to his partner in this trip, the doctor who convinced him to join our local races last year and to train for the marathon: Dr. Potenciano “Yong” Larrazabal III.

It was Dr. Larrazabal’s third marathon (after Pasig and Milo earlier this year). How did he do?

When we met the other Sunday, Yong told me how he’d attempt to run under four hours. And, true to form, at the start of the NYC run, he was on track. At the 5K point, Yong ran a speedy 26 minutes. At the 10K mark, 53 minutes. And, halfway at the 21-K point, his time was 1:58. Double that figure and it’s less than four hours.

“But it was so cold,” said Yong, “and though I didn’t get cramps, my legs felt tight. It was hard to run fast. Unlike here when I run and can pour water to shake myself from the sun’s heat, I couldn’t do that there because it was too cold.”

New York climate? Ours is 31 degrees Celsius—there, it was 13 degrees.

“When we arrived in Staten Island, where the run starts, it was 5:30 in the morning. It was even colder. To rest, we had to lie on the grass and Peter and I covered our bodies with whatever we could,” said Yong.

Yet, despite the numbing cold—and the fact that Dr. Yong had to battle jet lag, arriving a mere 48 hours before the marathon—his time was 4 hours, 39 minutes and 53 seconds.

In all, Dr. Larrazabal was ecstatic when I spoke to him. “Grabe the people. The whole 42 kms., there was no gap. On both sides of the ride, people lined up the streets. And every two kms., there was a band playing. And because I placed my name on the jersey, like almost everyone does, whenever I’d pass people would scream, “GO, YONG! GO! DON’T STOP!”

“And the logistics… unbelievable. Powerbars. Gels. Gatorade. They were all available throughout the route.”

When I spoke to the two, they were at a Filipino restaurant in New York called Bayan. And they had just finished dinner after being famished. “We had not eaten since the marathon and were very hungry,” said Dr. Mancao. “And the bulalo. Wow, I’ve never tasted bulalo so good!”

From the background of Peter’s mobile phone, I could hear noise—people chatting, laughing. They were celebrating, of course! With their spouses Sophia and Donna, with their relatives, with doctor friends who came to congratulate. I mean, who doesn’t party after finishing the world’s largest marathon? 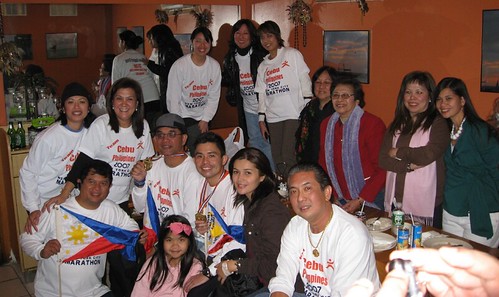 I remember exactly a year ago reading the same words from a man who ran the same NYC Marathon. His name: Lance Armstrong. And last Sunday, Lance joined again and, guess what, broke his record by clocking 2:46.

But first, before they start training for the 2008 Boston Marathon, to doctors Peter Mancao and Yong Larrazabal, who arrive here tomorrow morning, WELCOME BACK! 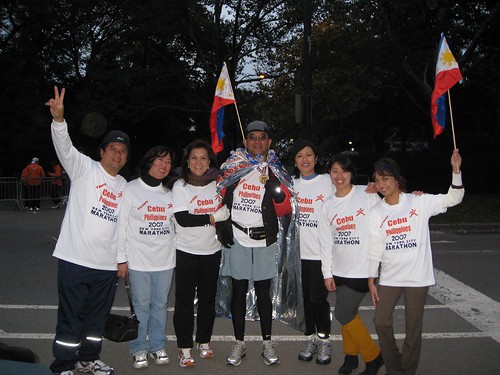