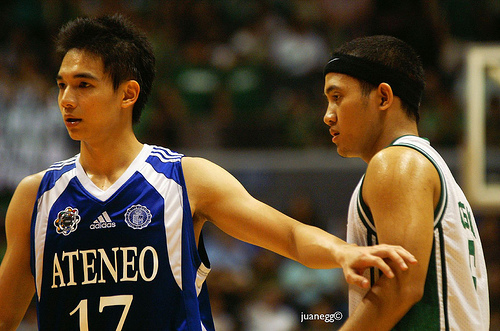 You know what the best thing is about sports? You never know the ending.

Isn’t that true? Unlike movies where, midway through the drama, you have a hunch of how it will end—in sports, you never, never know. Sure, there are exceptions like two Nike endorsers named Federer and Woods, and a southpaw named MP who’ll feast on a Mexican dish this Sunday—but for the rest of the sports world, it’s the same ending: You never know.

Consider Ateneo vs. La Salle. Twice in the regular season, the Blue Eagles beat the Green Archers. That soared the spirits of the Eagles, blunted the arrows of the Archers.

Then the playoffs arrived. La Salle sharpened its blades, looked to the heavens and unleashed razor-sharp bullets. The eagle swerved, dove, flapped it’s mighty wings, evaded shots that riddled the air—until it succumbed to an arrow-pierce on the chest. La Salle won Game 3, 80-79. The green army stood up. They sang. Rejoiced. Smiled at the defeat of their most-loved enemy. 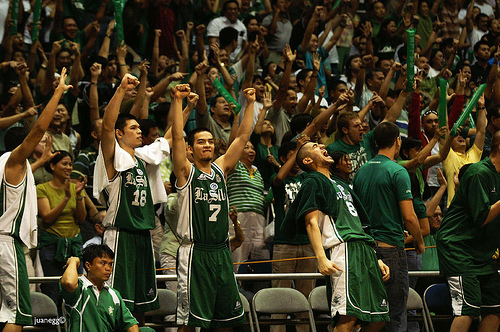 On to the final playoff game before the finals. La Salle owned a twice-to-beat advantage. Never in history, they said, had La Salle lost with such a lead.

But—never knowing the ending—La Salle stumbled. Thursday last week, after leading in the first quarter, in the 2nd, in the 3rd, and, with less than 120 ticks left in the 4th, leading by six points, La Salle’s green archer closed it’s eyes while Ateneo’s blue eagle—named Chris Tiu—swooped down from the sky, unfurled a three-pointer, drove against giant green men to snatch an Ateneo win. 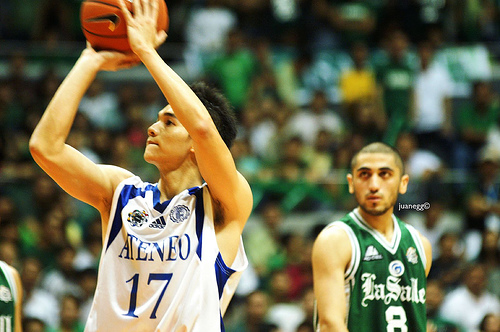 Was that the end? Was the rivalry done?

No. It was the start. And it all came down to one game…

Two afternoons ago, a lazy and wet Sunday, every blue- and green-bloodied creature on this blue-and-green earth watched.

I was at Hola España. Mike Marcaida was there. So were Bob and Gie Martinez, Ed and Marc Gonzales, Ryan Yu, Gerry Malixi, Bess Dizon, Ven Martelino, Mark Cusi, Maricel Martinez, Nino Bascon, and 15 others. Sitting near the center was Del Ordoñez, who first entered La Salle Taft high school in 1946 (“That year,” he told me, “our classrooms were makeshift tents right after World War II.”) Martin Ledesma, the president of the local La Salle alumni group, wore green. Same with his fellow alumni board members, Jun Dizon and Mariano Martinez.

The game started past 3 p.m. As expected, the score see-sawed: Ateneo led, La Salle caught up, DLSU ignited a 6-0 run, ADMU crawled back. At halftime, the Green Archers led, 29-26.

That lead was kept on to the third quarter until the last minutes of the game. But when La Salle led by seven points in the last two minutes and Ateneo fought back to within two points, shouts echoed around Hola España once more: NOT AGAIN!

Not this time. Not when Chito Cusi shouted to the group: “This is the last two minutes guys… I want you to… CHEER HARD! … PRAY HARD!” And so we cheered hard and, I presume, prayed hard. 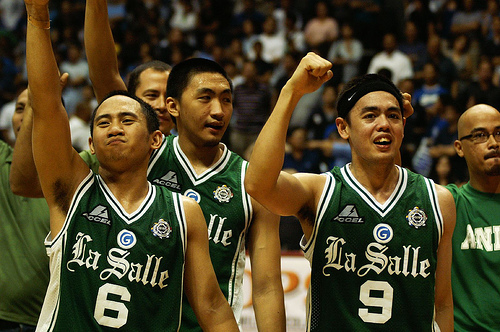 Wasn’t that the semis? Isn’t there waiting, relaxed and confident with their 14-0 regular season scorecard, the University of the East?

True. Which brings me to the “Quote of the Sunday” from Stanley Yap, a diehard Lasallian, who told me at game’s end:

“I don’t care about UE. This is more important than the finals.”