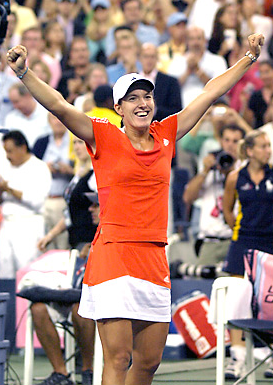 She is short. In this planet inhabited by the 6-foot-2 Maria Sharapova, the 6-foot-1 ½ Venus Williams, and the 6-foot-1 starlet named Ana Ivanovic, she stands petite. She’s only 5-foot-5. To us Filipinos, that’s tall. But to women’s tennis, that’s small. Add to that her physique. She looks frail, thin, flat-chested and, even if she flexes hard those leg muscles, they’d still be thinner than Serena Williams’… arm!

How is this possible? Look at the women today. They’re all giants. Gone were the days of Billie Jean-King, who won a combined 39 Grand Slam titles—despite her 5’4” frame. Or Evonne Goolagong, the 5’6” Australian who moved with such grace and finesse that she looked like a ballerina wearing tennis shoes.

Today, tennis is all about five letters: P-O-W-E-R. Slam that forehand, rip that backhand, ace that serve, smother that volley. Bang, bang, bang. And, to those who’ve followed this sport for decades, you’ll have to agree with me on this: Height is might. And—just like in almost every other sport not named billiards or chess—the taller, the better.

Justine Henin? She’s the David in the land of Goliaths. The squirrel in the grass fields filled with female lions. She’s the Michael Chang of the women’s game—the only difference being that Chang won only one Grand Slam title (French Open) while Henin will win her seventh today in New York.

That’s not all. Henin is aiming for career title No. 36. Now, that’s plenty. And, lest we forget, apart from all these major titles—she’s won four at the French Open, one in Australia and, counting today, two in America (the only one she hasn’t won is Wimbledon)—Henin, back in 2004, won the Athens Olympic gold medal.

She’s golden. Just like those Belgian chocolates, she, too, is Belgian, she’s loved, and world-renowned.

Why? How, you ask, is this possible? What makes this 126-lb. squirrel outfox her taller, bigger, more muscular enemies? Here’s one answer coming from a superstar himself, John McEnroe: “Greatest backhand in the game, men or women.”

Coming from Mac, that says a lot. But it’s true. Henin’s backhand is a beauty to behold. It’s one-handed, she hits it cross-court, she flings it down-the-line, she cuts through the ball with slice, she drop-shots—she can do anything she pleases with that backhand.

Determination. That’s another reason. This relentless, never-say-die, I’ll-never-quit-no-matter-what attitude that all sporting greats possess. Henin owns this. She has belief. Never mind the score, never mind the Goliath staring her down from across the net—she believes. She knows, with her racquet on hand, she can slay dead Goliath.

This belief all started at the age of five. At her home in Rochefort, Belgium, her house stood only a few meters from the local tennis club. She practiced tennis all summer, going home only in time for dinner. When she was 10, her mom, Francoise Rosiere, brought her across the border to watch the French Open final between Steffi Graf and Monica Seles. You know what Henin whispered to her mom?

But Justine was mistaken. She won the French Open—but not only once—she’s won it four times in the last five years.

And, this morning, right on top of her small, thin, and frail shoulders, she’ll lift this trophy with the words inscribed, “2007 U.S. Open Women’s Champion.”

The lesson for us Filipinos who are, ahem, vertically-challenged:

Who says we can’t win?