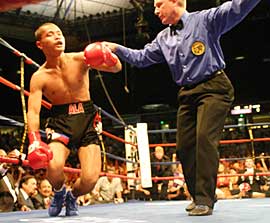 It’s true that Team Philippines won 5-1 against the Mexican contingent. It’s true that we’re bringing home the World Cup. But here’s the sad truth: In the biggest fight of his career, in the biggest fight of the night… Rey “Boom-Boom” Bautista was pummeled to the floor. What a shocker! Didn’t you feel sad? I pity Boom-Boom. I’ve spoken to him in person several times and he’s such a quiet, humble, soft-spoken and good kid. He’s only 21. And that’s the good news. Because he’ll rise from this fall, train even harder and avenge that shocking blow.