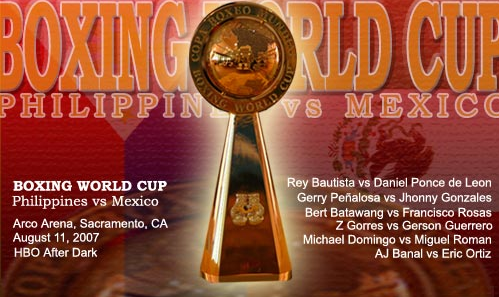 I live in Talamban. Veco says that we’ll experience power interruption starting 10 last night until 9 this morning. I hope they turn on the switch at 9 or earlier today. I don’t want to miss the World Cup. Who wants to? Nobody. I know that this morning, traffic will halt. Streets will stand deserted. Cars parked. Engines asleep. Cebuanos will be facing the flat screen to cheer, clap, slam the table if our own is KO’d, stand and touch the ceiling if a Mexican is twisted and mangled like a taco. Go, RP!

SISO. Did you watch Star Sports last Thursday at 10 p.m.? I hope you did. Me? I got teary-eyed. The story of the three Siso children—Nino, Sally Dine, Sally Mae—of how they were tutored and nurtured by their late father Dino (who passed away last year to cancer), is both heart-breaking and inspiring. Asked if they’ve given up hope in tennis now that their father is gone, the Siso siblings replied, “No. Because dad was happiest when we’re playing.” (In case you missed it, e-mail me at [email protected] I’ll send you a DVD copy.)

FOOTBALL season is back. Next weekend, it’s the annual San Roque Football Festival. On August 25, it’s by Mizuno. This is excellent news. Football today, among children, is more popular than basketball. Not to criticize the game with the orange Spalding ball and 10-foot-tall ring. I played elementary basketball varsity at La Salle Bacolod and recall those moments as some of my life’s most memorable. But football is better for Filipinos. Why? Because while we cried and lost in Tokushima, Japan, on the football world scene, we have a chance. Not as an RP team. But as individuals. For you don’t need to be 6-foot-8 like LeBron James to be a star. Look at Maradona. He stood 5-foot-5.

SRP. Yesterday, our ace writer Marian C. Baring wrote about the SRP. I recall attending the first Cebu City Sports Commission (CCSC) meeting at the Chez Lucie restaurant when Mayor Tommy Osmena and CCSC Chairman Michel Lhuillier “promised” to allot SRP land for sports. That was February. Not 2007. But last year. Since then, what’s happened? None. The dust has continued to pile up on the SRP. It’s time a small portion (5 hectares?) of the SRP’s 300 hectares be donated for sports.

JESSE BERNAD, the all-around sports superstar during my UP Cebu college days, sent this text message: “With the SRP, I hope you can include a baseball/softball field. We used to be one of the best in Asia. But look what’s happened. Japan, Korea and even Taiwan are sending world-class players to America. Here in RP, the sport has become close to non-existent. It’s a sport where height and heft are not advantages. Look at Ichiro Suzuki and the Japanese team winning the WBC last year. I will be willing to offer my services as coach/trainer pro-bono if this program pushes through.” — Thanks, Jesse.

MILO. While you cuddled your pillow at 6 a.m. today, over 20,000 runners trampled on Osmena Blvd. to run the Milo Marathon. Imagine that: 20,000 pairs of legs and arms! Weeks back, I joined the USC Power Run and that gathered 5,000 participants. But today, what a sight. In honor of Milo, all in green. All in rubber shoes. All sweating, panting, skipping those legs, pounding that muscle beneath the shirt. Next Sunday: the Cebu Doctors’ University Run.

TIGER WOODS? One round. Eight birdies. 63. With a 15-foot birdie attempt on the 18th, almost broke the record. Two-shot lead. Seven-zero when leading after 36 holes. Is there any doubt he’ll wear red and lift the trophy later?

FR. VICENTE UY sent me a text message from Manila last Thursday. I called back. After he answered, he turned over the phone. “Chairman!” I said. “John,” came the reply. “Please don’t call me ‘Chairman.’ Just call me Butch.” We spoke for a minute and promised to set a lunch or dinner date this August. Let me say this: I’ve met many influential people—but few as humble as Philippine Sports Commission (PSC) Chairman Butch Ramirez.