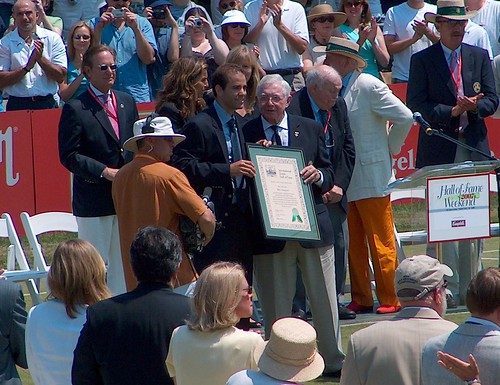 My all-time favorite tennis star, Pete Sampras, was inducted into the International Tennis Hall of Fame yesterday. In my mind, Sampras was tennis’ Greatest Ever. (That is, until the Swiss master surpasses his 14 major titles and wins the French Open…) I got the chance to see Sampras in person during the 1999 U.S. Open. It was at the Arthur Ashe Fans’ Day, held two days before the event. Unfortunately, the day after, Sampras got injured during practice—and so I never saw him play an actual match.

Dan Mastous, my buddy from the U.S. who’s been to Cebu a few times, was at the Hall of Fame ceremony and he e-mailed me a detailed look at what happened. (All these photos were also taken by Dan.) Take note that apart from Sampras, three others were inducted, including Arantxa Sanchez-Vicario. Here’s Dan “reporting live from the Newport Casino in Newport, Rhode Island…”

“It started with Russ Adams, who was introduced by Bud Collins. He’s a long time photographer who has apparently take a number of very well known photos in tennis.

“He was followed by Sven Davidson, one of the first of the Swedish tennis players. He was introduced by Vic Seixas (another former great player). I had the opportunity to talk to his daughter for a bit. She was telling me that it was a letter from Davidson which convinced the tennis powers that be in tennis that the amateurs and pros should be able to play in the same tournaments, resulting in what we now call the Open Era of tennis.

“Then the more well known entries began their inductions. First, Arantxa Sanchez-Vicario, who was introduced by a friend and manager.” 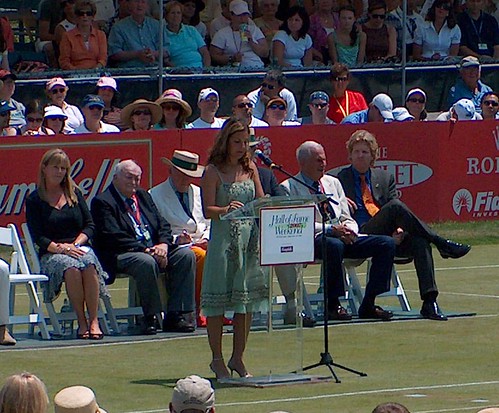 “She said she won her first tournament on the Hall of Fame grass. She told a funny story about playing a final in a Spanish Nationals tournament early in her career. She said the points were very long and “after an hour and half, I won the first set 7-6”. The woman’s final was moved to a back court mid-match for the men’s final. She said she was crying even though they were moving for her brother Javier. She said her greatest moment was winning the French Open in 1989 over her “good friend” Steffi Graf.

“Pete Sampras was introduced by former coach Paul Annacone. He talked about a match that he played against Pete Sampras in 1989, very early in Pete’s career, which Paul won. He said he was very proud of having a 1-0 match record against him.

“The general tone of both Paul’s introduction, and Pete’s speech was about his need to be ‘just Pete Sampras, tennis player’ he is very uncomfortable about his fame, and would prefer to be just another player.

“Pete himself took about 3 times as long as it should have. He broke down numerous times during the speech. It began with nearly a minute of standing ovation. About 30 seconds in the first tears began. He took about 30 seconds to compose himself, and said ‘I’d rather be playing tennis”. I don’t think that was in his script. 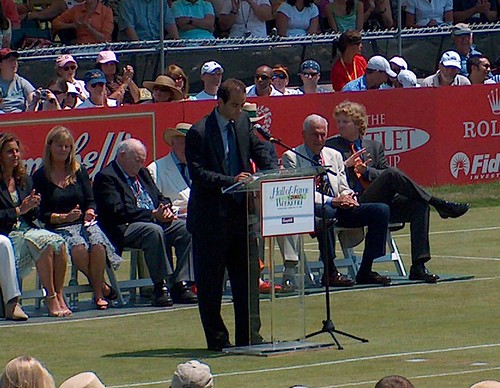 “He talked about his youth, and then his relationship with Tom Gullikson, in between tears. The years with Annacone, and finally about meeting and marrying his wife. He said at one low point between ’98 and 2002, he considered retirement, and his wife told him she would support him whatever he wanted to do, but “if you’re going to go out, go out on your own terms” which he did after winning the 2002 US Open.

“He talked a lot about his core values, winning with dignity and class, and honor. He finished his speech by saying “I’m just a tennis player, nothing more, nothing less. That’s more than enough for me, and always has been.”