Rotary (International) was started in 1905 by lawyer Paul P. Harris. At 108 years strong, it is the oldest and biggest civic organization the world has known. At present, Rotary has nearly 1.3 million members in over 200 countries. There are over 34,000 clubs worldwide.

Two nights ago, RCCW celebrated its 51st Induction Ceremony. On hand to turn-over the gavel and the responsibilities to the new president, Robert “Bobby” Yap, was our 50th year leader.

“Golden President,” we call him — he’s Alvin Tan. The owner of Familia House (the decades-long establishment offering all types of beads and clothing accessories), Alvin was our chosen leader for the club’s historic golden year.

After 12 months as our club president (July 2012 to June 2013), I’m proud to say that Alvin was one of the — if not THE — best president RCCW has ever had. In the District-wide Rotary awarding held a couple of months ago, RC Cebu West garnered most outstanding awards for the club, the president, the secretary and more. Plus, last February during the 76th Cebu City Charter Day awarding, RCCW was a top honoree of Mayor Mike Rama.

How did Alvin do it? What leadership lessons can we learn from him that we can apply in our respective organizations or businesses? Plenty.

“Pres. Alvin was able to develop rapport with his officers even before his term started and he was able to create a cooperative team spirit early,” said Rotary’s Past District Governor Jose Ma. Luis “Toto” Cupin. “He did his planning and organizing and set specific, measurable, achieve and time bounded goals based on the Presidential Citation and District Governors Challenge. Pres. Alvin is a good communicator and persistent at that. He emails or text meeting reminders. Club meetings were terrific – good program and good food.”

On good planning, here’s an example. Among the dozens and dozens of projects Pres. Alvin accomplished during his one-year term, the biggest was the club’s donation of a fire truck to the Cebu Filipino-Chinese Volunteer Fire Brigade.

You know when this fire truck was donated? A month before Alvin’s term started! Yes, not during or at the tail-end of his presidency — but before. That’s how good a planner he is. A year before his term, he socilited the help of various individuals (including fellow Rotarian Jun Tallo, who personally chose the fire truck in Canada), so that his big project will be ready — before he assumed office.

That’s the first lesson: Plan — and plan early. As the saying goes, “Failing to plan is planning to fail.”

Next, be persistent. I’ve been with Rotary for over eight years now and I’ve never encountered a president who’s as persistent in following up his members than Alvin. Through emails, text messages, and calls — he communicates with everyone all the time. If he sets his sights on a goal (to invite a specific person as guest speaker or to accomplish a certain project — Alvin is relentless in achieving the goal.)

Third lesson: Be nice and humble. In Alvin’s case, you can’t find someone who’s more friendly. When I asked him how he made his term so successful, he swiftly deflected the attention on himself and showered praise on his officers and fellow Rotarians.

In his e-mail to me, he gave special mention to Rotary Sec. Fabby Borromeo and his overall adviser and “potential Governor” Wilton Uykingtian — plus the rest of the RCCW memberships — as the ingredients to his success. He singled out one person whom he refers to as the “Godfather” of RCCW —  PDG Toto Cupin — saying, “I would give a 21-gun salute to Gov. Toto who helped me with all the projects.”

To President Alvin, congratulations on a golden year. You’ve shown us the true meaning of Rotary’s motto, “Service Above Self.”

Call me biased for sports but, in my seven years with the Rotary Club of Cebu West, I heard our best speaker talk last Tuesday. He’s a Guinness World Record holder. He’s convinced an estimated 30,000 children—many out-of-school youth from the barangays—to transform their lives through sport. 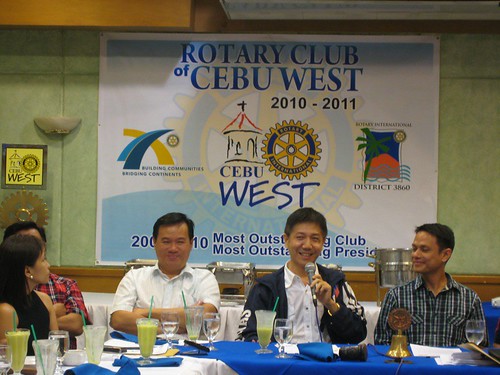 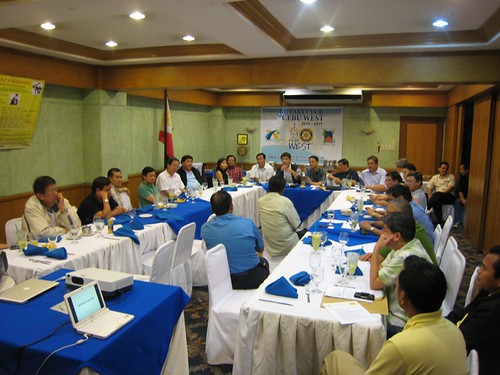