Spoiler Alert: If you have yet to watch the latest Netflix sensation bearing this article’s title, stop reading this. And do the next best thing: Watch the 7-part drama series that has catapulted to the top ratings since it debuted last Oct. 23. You’ll laugh, feel mesmerized at the sight of a genius; you’ll probably cry and fall in love with chess.

Anya Taylor-Joy was superb. Her portrayal of the troubled chess prodigy Beth Harmon was outstanding. Same with the other cast members in this TV miniseries that’s set in the late 1950s and ‘60s.

Like many who have watched The Queen’s Gambit, this is one of the best TV shows that I’ve watched. If there’s only one negative: this miniseries is not a true story. But it may well be. It’s adapted from a book written by Walter Tevis in 1983. Both the book and the Netflix show bear the same title. This is not the author’s first blockbuster as he also wrote “The Hustler” in 1959. And for many who lived in the ‘60s, “The Hustler” movie is the classic starring Paul Newman. Mr. Tevis also wrote “The Color of Money.” This became another blockbuster starring Paul Newman and Tom Cruise. You will note that the author Walter Tevis wrote about sports — pool (billiards) and chess.

With The Queen’s Gambit, if you’re a chess lover, you’ll adore this show. (While writing this, I remembered the late Boy Pestaño, our dear friend and fellow columnist who penned a chess column here called “Chessmoso.” He would have relished the show.)

Why “The Queen’s Gambit?” It has a double meaning. The word “gambit,” as we know, is a gimmick or ploy to lure another person. In the game of chess, the Queen’s Gambit is one of the most popular moves where one sacrifices a pawn or some pieces with the end goal of gaining control of the game and winning. Beth Harmon, the queen of chess, played this trick perfectly in the finale.

NETFLIX. If you’re a sports lover, there are many more sports-related shows to watch. For sure, you have seen “The Last Dance,” the 10-part documentary on Michael Jordan.

“The Playbook” is a show I highly recommend. A top-caliber coach is interviewed not only for his or her views on the sport but also on his philosophies and tips in life. I relished the dialogues with Jose Mourinho, Doc Rivers and Patrick Moutaroglou (Serena Williams’ coach).

“Icarus” is an amazing documentary about sports-doping, cycling and Russia’s state-sponsored cheating. “Formula 1: Drive to Survive” is excellent. And, being a tennis fan, “Guillermo Vilas: Settling the Score” is a film I plan to watch tonight.

Want to witness history? Today? The Guinness World Record? Visit the Cebu City Sports Center. I did yesterday. What did I see? Thousands of students with their brain cells activated. They pushed the pawns forward. They gobbled up hundreds of rooks. They smiled when the King collapsed. They screamed, “Checkmate!”

Why is chess important? I asked the brains behind this brain-game, Edward Hayco. “Reading a book, for example, instead of watching a movie, affords the child a deeper, more profound and thorough understanding of a certain concept,” said Ed, the chairman of the Cebu City Sports Commission. “In this case, we’re talking about the theories of chess… how the game is played, its rules, how the pieces moves, how you achieve your goals; how to be patient and when to be aggressive… it creates a deeper sense of awareness and creativity in the minds of the kids. It develops their character to be patient, to analyze and strategize aside from just being a game for the intellectual.”

Ed added: “If we plant the seeds right and nurture it well, Cebu may just be the next CHESS MECCA OF THE WORLD!”

Ambitious. Visionary. Sensational. These are the words to describe Mr. Hayco. And, as grandiose as his dreams are, he’s able to fulfill them. Look at Dancesport. Ed promised a “Largest Dance Class In The World.” He delivered in 2009. This weekend, he promises the “Largest Chess Tournament,” easily outnumbering the 1,214 of Russia. He delivers with 43,157 participants. Also, Cebu is the world-record holder in “Most Fireworks Launched in Less Than a Minute” (thanks to Brian Lim of Pyroworks, that’s 125,801 firework rockets).

In the Philippines, Cebu is the “Sports World Record City.”

Yesterday, I watched the Opening Ceremony at 1:30 P.M. A total of 1,500 pairs of students sat across each other with chessboards in between. They filled the entire Abellana grandstand.

A six-year-old Grade 1 student read the Oath. Rening Ylaya, aged 76, joined to face a high-schooler. The highlight? The dance presentation on a giant eight-by-eight grid chessboard. From the left entered the “live” chess pieces dressed in formal, Medieval attire. They were the 16 black pieces. From the right emerged the Sinulog-dressed tribal human pieces. Move after move, dance after dance, they battled on the same stage as last Sunday’s Sinulog. In the end, our own indigenous pieces won. What a show! 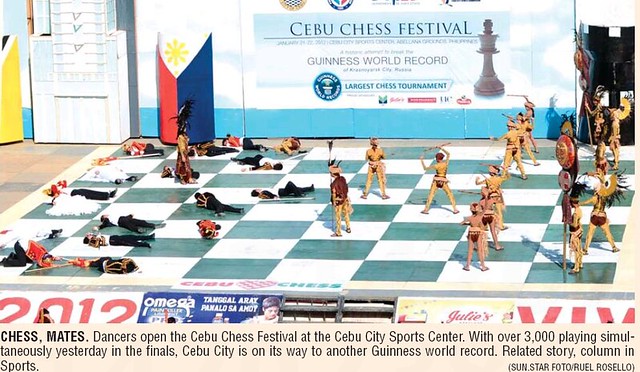 Ed told me the story of the night high school students. In one public school, only 60 percent attended the classes. But, miraculously, after the chess tournament started, the attendance jumped to 90 percent. Said Ed: “They wanted to attend school so they can play chess!”

The Cebu Chess Festival ends today. But, in truth, it’s only the start. “The impact may not be felt now,” said Ed, “but when we start discovering Grandmasters years from now, we know they are the fruits of the seeds that were planted today. We were told that there are now many kids seen along school corridors during recess, along the street sidewalks and sari-sari stores playing chess. Many of them playing with their fathers! It’s a nice sight. We feel we have made the kids REDISCOVER THE ART OF CHESS, creating the intellectual warrior in them. We hope we have taught them that it’s more exciting to read a book than to watch a movie… more exciting to play chess than to play a computer game.”