On TV, I rarely watch live sports nowadays. Unless it’s a major spectacle like the upcoming Warriors-76ers NBA Finals or a La Salle-Ateneo UAAP game 3 or a Rafa-Roger contest in New York, I opt to visit one of the world’s most visited websites: YouTube.

Here’s what I do: I don’t scan the results and wait 40 minutes after any sporting event has finished and it’s right there, an 11-minute summary of the game. It has zero commercials and nobody misses! Every attempt on YouTube is a good shot.

Yesterday, that’s what I did. It was the Sweet 16 of the NCAA basketball tournament between Duke University and Virginia Tech. I rarely followed the NCAA games in the past but this year is extra special.

Zion Lateef Williamson. If you’re a basketball fan, it’s a must that you watch Zion. (Google offers 4.6 million videos on the phenom.)

Zion is an 18-year-old Duke University freshman who stands 6-foot-7 and weighs 285 lbs. But what separates him from the dozens of other college dribblers are his LeBron James-like physique, his jumping ability, his left-handed aggressive moves, his gravity-defying block shots and his rim-shattering dunks (including dunking from the free throw line).

Zion has the bulk and size of a power forward but he struts like a point guard.

“What strikes me?” LeBron James was asked. “His agility and his quickness. For his size, how strong he is, to be able to move like the way he moves, he’s very impressive. I mean, everybody can see the athleticism. That’s obviously, that’s ridiculous. But the speed and the quickness that he moves (with) at that size is very impressive.”

Against Virginia Tech yesterday, the No. 1 seed Duke triumphed 75-73. Zion scored 23 points, including an alley-oop dunk that’s ridiculous.. catching the ball at a ceiling-high elevation before slamming it home with both hands. The TV announcer then quipped, “How high can you go?”

How high can Zion go? He is surely going to be the No. 1 pick in the NBA Draft. The joke around the NBA is this: #NotTryinForZion. It means the worst-performing NBA teams are purposely losing so they’ll get a better chance of drafting him.

Duke and Zion are in the NCAA Last 8 and will play Michigan State tomorrow (Phil. time).

If Zion helps coach Mike Krzyzewski win his sixth NCAA title for the Blue Devils, it will elevate Zion to a stature as the best-ever collegiate player of his generation.

What makes Zion a potential global superstar is his type of game: he flies and dunks with the ferocity of a Darryl Dawkins. Of these alley-oops, of which he has recorded dozens this season, Zion said yesterday after the game: “I’m jumping not knowing where the rim is.”

Zion can shoot a good 3. And, the most controversial happening this season, he can also break open a Nike shoe, injuring his foot.. which was such bad publicity for Nike that the company’s shares dropped by $3 billion. That’s the power of Zion. In majority of sporting endeavors, the majority of participants are men. This is understandable. Men are generally stronger, more muscular and athletic than the women

Not last night. Not last Friday as we celebrated the International Women’s Day and not this Women’s Month of March.

A total of 350 AWUM women braved the city streets of Lapu-Lapu, Cebu and Mandaue last night. They started at 10 p.m. The fastest runners to finish will be speedy (Lizane Abella set the course record last year, clocking 4 hours and 21 minutes). But majority will take a relaxed jogging pace, finishing around 6 a.m. The cutoff is at 8 a.m., giving the ladies 10 hours to complete 50K. Unlike larger events like the Cebu Marathon or the 7-Eleven Run, the roads are not closed. The women will have to wear blinking lights gear and strap neon stickers and run on the roadside. They’re brave.

One of the participants is my beautiful wife Jasmin. I recall us visiting the starting line of AWUM several years ago at the Cebu City Hall and Jasmin declaring that she’ll run the event someday. That someday is today and she’s accompanied by her dear friend Jewel Co. And, as if running 50 kms. is not challenging enough, the route is difficult. It will include four climbs: first is the climb up Busay all the way to the U-turn point in the Busay Barangay Hall; on the latter part of the race are three of Cebu’s bridges: Cansaga, Marcelo Fernan and the Mactan-Mandaue Bridge. These superwomen — running 50 kms. the entire night — are fearless.

What will help motivate the ladies is the presence of 28 volunteer running groups who will spread themselves every 1.5 kms. to feed, massage, hydrate, “retouch” and put on make up on the tired but lovely faces of the ladies.

I attended the Race Kit collection and Race Briefing last Friday night at the garden of Ayala Center Cebu (across Belo) and it was a celebration of womanhood.

Joel Garganera, the Cebu City councilor who is the founder of AWUM (together with race director Dr. Willie Estepa and the group ThinkTank), spoke to motivate the crowd.

As the Greek philosopher Socrates once said: “Once made equal to man, woman becomes superior.” Where is the best tennis facility in our 7,107 islands? If you answered Cebu (no way!), Rizal Memorial in Manila (not anymore), Subic (yes, but once upon a long time) or PCA in Manila (no), you guessed it all wrong.

The answer? Bulacan. Yes, the province in Central Luzon that’s a couple of hours travel from Metro Manila.

The total budget — based on what I heard — was P1 billion. This amount includes a mix of world-class sports facilities. There’s an indoor basketball gymnasium that seats at least 3,000. An Olympic size swimming pool. There’s a standard football rectangle and track oval. Plus several other top-notch sports facilities.

All are housed in a gigantic structure that looks like a spaceship (or a giant mall) from afar. And, at the topmost floor of the multi-level building are 11 tennis courts. Five courts on each side complete with bleachers and, at the far end, a center court that’s surrounded by its own seats. The 11 courts are all indoor and hard-court and they carry specs that’s similar to international standards. Last weekend, my wife Jasmin and I were in Bulacan. For the first time in the history of the UAAP (now on its 81st year), the tennis matches are being played in CSA-Bulacan. In years past, the games were held at the Rizal Memorial Stadium, right beside La Salle and several universities.

Last year, when the players and school officials first heard of the move to transfer the games to Bulacan, complaints reverberated. That’s too far away.. a two-hour-plus drive! they hollered.

But as the games started and the 10 simultaneous matches were played (instead of the six in Rizal) and the indoor roof shaded the already-tan-skinned players, the gripes turned to praises. (Our daughter Jana represents Ateneo and they’re carrying a 2-1 win-loss record.)

The CSA-Bulacan indoor tennis stadium opened only last year. And, as evidence of that, many of the sturdy plastic chairs in the bleachers were still covered with plastic. The whole school is huge. Since they opened the campus in 2015, there are a few students thus far.. only 110 students in the elementary and high school levels. But the long-term goal is to have a full-scale university that will include college courses. The campus houses a building with dormitory rooms and a sizable chapel that seats hundreds.

From what I heard, the property (located in the city of San Jose del Monte) was donated by the Araneta family to CSA and the school raised the funds for the multi-billion project. It is situated beside the Ayala Land Inc. 98-hectare project called Altaraza.

Build it and they’ll come. That’s the overriding message that strikes me when I think about the humongous sports school project. Even if it’s located far from Metro Manila, they built it. And my bet is that, in the long-term, with the growth spreading outside the metropolis and better transportation systems are in place, this CSA-Bulacan sporting heaven will thrive. 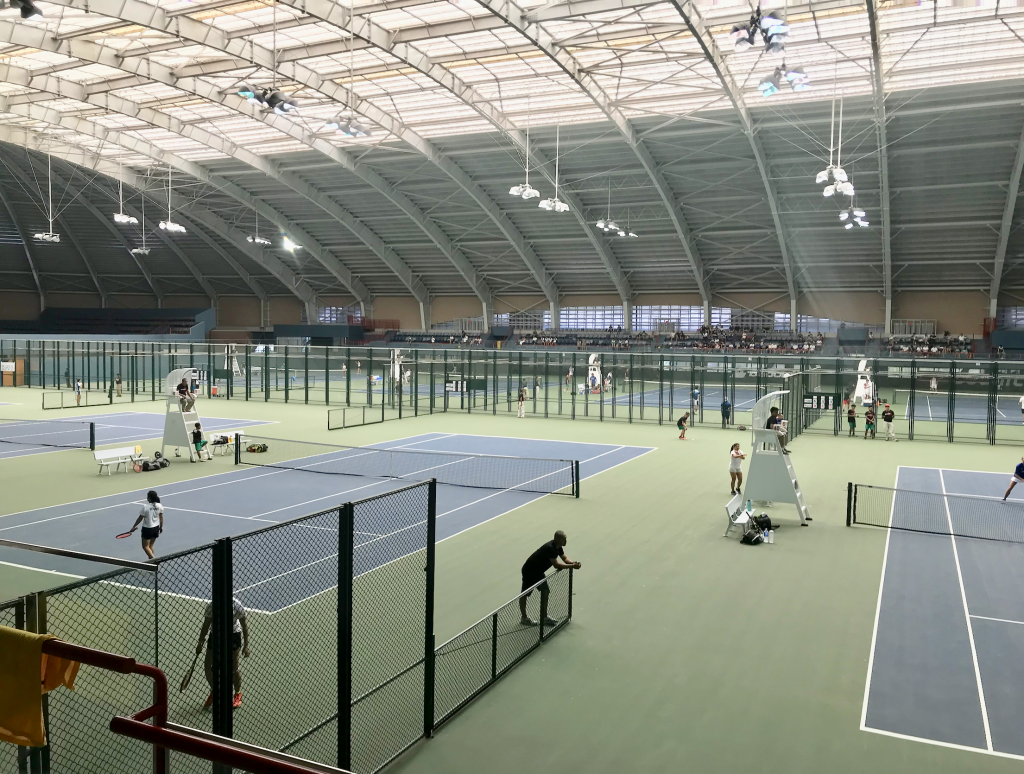