Last Thursday, I wrote about how Maxime Rooney, three years ago, wanted to represent the Philippines in future swim meets. Led by his dad Kennan, they sought — and got — permission from the US national swimming association for Maxime to swim for Team PHL.

Unfortunately, they were informed by Mark Joseph, who heads the Phil. swimming association, that Maxime needed 12 months of residency in the Philippines — an impossibility given his studies in California. In the end, Maxime Rooney was told no.

I ask these questions: Could other ways have been exhausted? I mean, the US officials already said yes to the Rooney family’s request. Maybe the Phil. swimming association did not realize fully the potential of Maxime — that he will turn out to be a junior world record holder and, very, very possibly, be a future Olympian? And, who knows, maybe even a gold medalist — what could have been our nation’s first Olympic gold?

The fact is, complained Kennan, months would often pass before a simple reply (from Mark Joseph) would reach his email inbox.

Now, it’s too late; Maxime competes for Team USA. And just the other week, he was sent an email by the national team with the words that are the most coveted of any American athlete: “Welcome! You’re a U.S. National Team member!” Among his teammates are two guys you might have heard of: Ryan Lochte and Michael Phelps.

Maxime Rooney is excited about the Olympics. Like any world-class athlete, the ultimate goal is to compete in this once-every-four-years event. For Maxime, the main target is 2020. That’s five years from now during the Tokyo Olympics and Maxime will be a ripe 22 years of age.

But, wait, next year, there’s Rio de Janeiro. And while he’s much younger than the other big boys, Maxime is ready.

“Maxime plans to join the US Olympic qualifying in July next year,” said his father Kennan, whom I met two weeks ago in Mactan together with his first cousin, Lapu Lapu City Councilor Harry Radaza.

During my hour-long chat with Kennan, I got to hold with my fingers, for the first time, a gold medal and a silver medal. I’ve held dozens of similarly-colored medals before (courtesy of my daughter Jana), but these were Milo or Palaro or Batang Pinoy medals. Local hardware. What Harry and I held were FINA Junior World Championships medals — which Maxime won in Singapore. (Maxime not only won a pair of gold medals and a silver but he was also voted by the U.S. squad as “Team Captain.”) 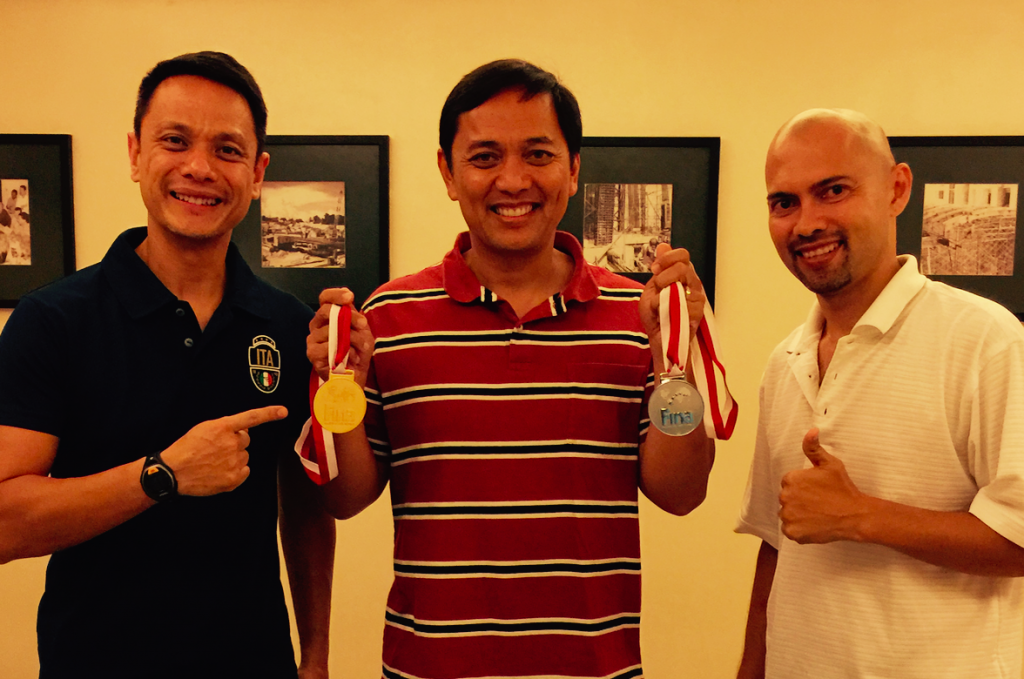 Kennan (center) with JP and Harry

After the possible stint in the 2016 Olympics, Maxime’s goal is to join the University of Florida team. Not only does the squad possess some of the nation’s best collegiate swimmers, but the coach (Gregg Troy) was the head coach of the US team during the London Olympics. Plus, one of the assistant coaches competed in the Barcelona Games. This means that, in the next several years as Maxime’s body develops and he churns out faster times — all focused on the 2020 Tokyo Olympics, when he’s peaking — he’ll be coached by some of the world’s best mentors.

Physically, the 17-year-old Maxime, who devotes 22 hours each week in the pool, will still grow stronger. He hasn’t engaged in weight training yet, instead focusing on building his lung capacity.

Standing 6-foot-4, I asked his dad (who’s about my height, 5’8”), where Maxime got his tall build. “My wife Charlotte, who’s Belgian, is tall,” he said. (Speaking of Belgium, here’s an interesting side note: When the Belgian swimming officials heard of Maxime, they, too, wanted him to swim for them. In a two-way skirmish between the Phils. and Belgium, it’s the U.S. who’s emerged victorious.)

How big a celebrity is Maxime at home? Only recently, said his dad. Prior to the junior world record of Maxime, the school principal (in their town of 80,000) knew that their star athlete was superb — but the principal didn’t know he was that outstanding.

Maxime’s maxims? I asked his dad.