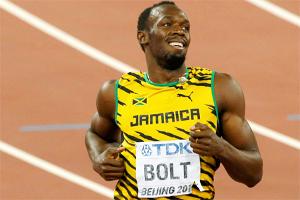 Last Sunday, right after a late night dinner with Jasmin, I hurried upstairs to switch on the TV. It was the IAAF World Championships — an event that happens only once every 24 months. Next to the Olympics, this gathering is the most prestigious. It’s being held at the Bird’s Nest in Beijing — the same 80,000-seater arena that Jasmin and I were at seven Augusts ago when China hosted the Olympics.

In this August 22 to 30 tournament, one spectacle is the most awaited. It’s the quickest-running event. It’s the shortest, in terms of time elapsed. But, if we speak of drama and adrenaline, nothing is grander.

It’s the 100-meter dash. The winner gets to be called “The World’s Fastest Man.” Of our planet’s 7.37 billion inhabitants, imagine being that one human being who’s fastest?

This year and last year, one person has been the earth’s quickest. No, he’s not Mr. Bolt (we’ll get to him later). He’s Justin Gatlin. He stands 6-foot-1 and weighs 183 lbs. He was born in New York and resides in Orlando but he’s most at home on the rubberized circle called the track oval.

Before Sunday, Gatlin was undefeated in 28 races since Sept. 2013. Though no longer young at 33 years old, Gatlin was also the quickest during qualifying, posting a 9.77-sec. time in the semis.

Usain Bolt? He was recovering from a leg injury (“a blocked sacroiliac joint which restricts his movement and puts pressure on his knee and ankle.”) And so last Sunday, it was a head-to-head battle between Bolt and Gatlin. What made this fight more enticing was this: There was a “good” vs. “evil” plot.

Bolt is good. Not only on the track but he’s never tested positive for drugs. He’s as clean as Lance Armstrong was “dirty.” Gatlin is the opposite. Back in 2001, he tested positive for drugs. But during that time, the regulators concluded that he was given medicine to treat his attention deficit disorder; something he’s been diagnosed with since he was nine. He was absolved. But not in 2006 when the 2004 Athens Olympic champion tested positive again. This time, there was no escape. It was for testosterone and, while the IAAF asked for an 8-year ban, he was sentenced to four. He was banned from 2006 to 2010.

When Gatlin returned, capturing bronze at the 2012 London Games and silver at the world championships two years ago in Moscow, he was criticized as a drug cheat. Thus, the good vs. evil setting.

Fast forward to the 100m race last weekend, you know what happened: Gatlin, in the last 15 meters and while neck to neck with Bolt, appeared to have stumbled and leaned too early.

Bolt won gold with a time of 9.79. Gatlin snatched the No. 2 spot — losing by 0.01 seconds! Ouch. To add to Gatlin’s misery, his fellow Jamaican Asafa Powell, himself a former drug cheat who was banned six months last year, said: “No one wanted Gatlin to win.”

He’s right. Everybody loves Bolt and nobody roots for a former drug cheat.

“I never doubt myself,” said Bolt, after the win that was hailed by sprint legend Michael Johnson as “Usain Bolt’s best race ever.”

Bolt added: “I know my ability. It wasn’t a perfect race but I got it done. I definitely think this was my hardest race. I’ ve been through a lot this season, it’s been rough and Justin been running great showing up running fast times. I knew it wouldn’t be easy.”

This victory solidifies Bolt’s standing as the greatest sprinter of all time. He holds the 100m world record of 9.58. By comparison, Eric Cray holds the Phil. record at 10.25, which he set last June at the SEA Games in Singapore.

(On a personal note, our family is such a huge Bolt fan that we named our only dog (a chocolate Labrador Retriever) after him. It helped that we got “Bolt” on Aug. 8, 2012 — the day when Bolt won gold in London.)