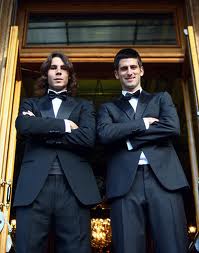 If you follow the ATP Tour of men’s tennis, then you’ll know that this week is important. The venue is England. The players number only eight. It’s the season-ending finale called the ATP World Tour Finals. Many refer to this as the “fifth Grand Slam of tennis” that’s played indoors. It’s being held at the 02 Arena in London — one of the world’s busiest where concerts rock audiences and sporting events thrill spectators.

By-invitation-only, the world’s top eight are joining. Minus hometown boy Andy Murray, who’s recovering from back surgery, the likes of Wawrinka, Gasquet, Ferrer and Berdych join the popular names of Del Potro, Federer, Djokovic and Nadal.

Instead of a knock-out format like in all others (you lose one and you’re out), this week it’s round-robin play. Two groups of four are divided; the top two of each bracket advance to the semifinals.

One million six hundred thousand dollars awaits the undefeated champion. And, for the non-winners, even if you lose every single match, you’re still richer, just by showing up, by $120,000. Not bad.

The sub-plot of this mega-event is the battle for the title, “2013 World Tennis Champion.” Will it be Rafa or Novak? Last night at 10 p.m. (Phil. time), Rafa played Stan Wawrinka. If the Spaniard won, he would have clinched the year-end No. 1 spot. If he lost, Novak still has a chance. 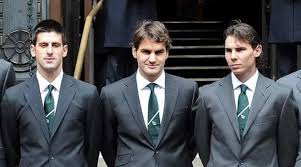 For Roger Federer fans, it’s not game-over yet for the 32-year-old Dubai resident. Though he’s amassed nearly $80 million in prize money and owns most of tennis’ records (17 slams and 302 weeks as No. 1), he’s only been victorious in one tournament this entire 2013 (Halle, on grass, in June). This is embarrassing for The Great One who’s garnered 77 total tournament career wins. Can he win one more Grand Slam title? I’m unsure. His best prospect is Wimbledon, where he’s won seven, but basing on his result this year (he crashed out in the second round), it doesn’t look good for RF.

What’s working for Federer is his good health. Unlike the injury-plagued (and five years younger) Nadal, the Swiss has hardly ever been injured. He stretches. He doesn’t grunt and grind and exert as much physically as Rafa. And as long as the cute twin girls, Myla Rose and Charlene Riva, don’t pester their dad too much, Roger is expected to play for three or more Novembers.

With Nadal, what a comeback year. Out for seven months under rehabilitation, his rejuvenated and second-hand/good-as-new body wins 10 tournaments this 2013, including the French Open (which he forever owns) and the U.S. Open. Can he add the only missing piece in his storied life story, the ATP World Tour Finals, which he’s never won before? “Last year was a big miss for me,” Nadal said. “Even if I was not able to play my best a lot of times here, I really have great feelings every time I have the chance to play in this stadium.”

Will he emerge as champion this Sunday? We’ll see. But the way Djokovic has been playing of late — winning Beijing, Shanghai and Paris; 18 undefeated matches so far — I’m rooting for (though I’ve never been a huge fan of) the Serb.

On the topic of indoor tennis, I like it. If you watched the Paris Indoors last week, you’ll see the difference. Lights are dimmed. Loud music pumps the hearts of the fans. Smoke machines fumigate harmless excitement. Laser lights dance as the players prance. Unlike the sunny/sweaty drip of the outdoors, indoor tennis is cool, concert-like, captivating. 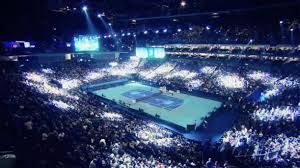 To us here in Cebu, the best thing is called HD TV. That’s High Definition. If you’re subsribed to it (mine’s on SkyCable; channel 702), then I need not explain further. As the saying goes, “It’s best seen, not explained.” If you love sports and can spend a little bit more on home entertainment, go HD.