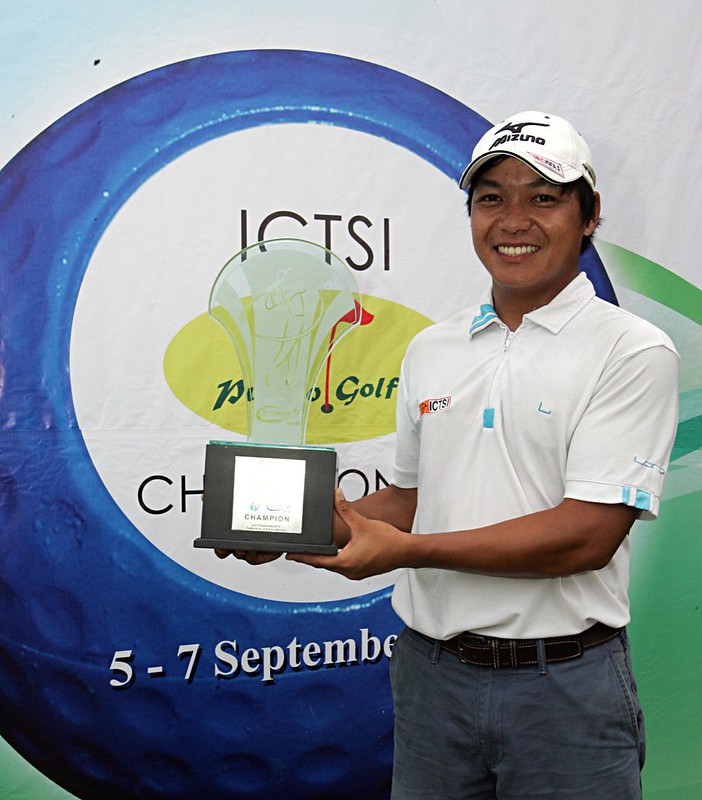 Photo from Nimrod Quiñones at FullPointCebu

Thanks to the text message of six-time Cebu Country Club champion Eric Deen, I got to learn about the astounding achievement of a fellow Cebuano.

The “W” means “win” and that victory — Chuck’s first since he turned pro — happened last month when he won the ICTSI Pueblo de Oro Championship in Cagayan de Oro City. In that CDO win, Chuck scored a remarkable seven-under 65 in the final day then defeated Richard Sinfuego in the playoff.

“After my victory in Cagayan, I felt both confident and anxious,” he said. “Confident because I proved to myself that I have what it takes and anxious since I don’t know what my game would be coming from a win. My good finishes in Davao (8th place) and Sarawak proved that it wasn’t just a lucky week. I’m really playing well.”

“Chuck has dispelled any notions of a sophomore jinx,” said Jovi Neri, the chieftain of CCC’s jungolf program. “His win in Pueblo makes him the first product of the CCC Junior Golf Program to win professionally.”

I asked Chuck if he expected to play this well this soon. “I don’t make any predictions but if I did, I wouldn’t have predicted this much success this early on. I knew I was improving on a daily basis and that alone would make me happy, but that win was a nice bonus. I dream about things like this, and it’s nice to see it materialize.”

Chuck — whose ultimate dream is to play in the PGA Tour — attributes two reasons for his success: patience and support. “There have been a lot of struggles this year but I kept patient and didn’t let it affect me,” he said. “I look at the success of our other pros and turn that into my motivation. I also have a great support system: my sponsor (ICTSI), friends, coach, girlfriend, family. They support me 100% and its reassuring knowing you have all those people behind you.”

His idol? Tiger Woods. “Always was and still is. I can’t explain why since I don’t particularly like his swing or off-course habits, but he’s just a joy to watch. The things he does are amazing.”

Commenting on this pressure-packed game, Chuck said: “Golf is all mental. You could have the best swing in the world and it wouldn’t matter one bit if you didn’t have the mental toughness. At the end of every tournament, the camera doesn’t decide who wins or not. It’s the scoreboard, and there are no pictures in the scoreboard. Pressure situations are inevitable. No matter how much you try to stay away from them, you will have to face it. It’s easy to say not to think about pressure situations, but it’s hard to do it. I love pressure situations. I believe that if you are not in a pressure situation, you are not in contention. I always look for pressure because it means I’m up in the leaderboard and I have a chance to win.”

On the Ryder Cup: “That’s golf; there are no guarantees. It ain’t finished until that very last putt. I just captained the South Team in this year’s ‘The Duel’ and we were down 2 points going into the last day. I told my team that “we are still here, we wouldn’t be playing today if we didn’t have a chance” and after that day, we almost swept the other team to win the cup.”

This 2012, Chuck will join three local and three international tournaments. Next year, his goal is the Asian Tour Qualifying School. “That would be a big step,” he said, “because qualifying there would give me a card to play for the main tour – Asian Tour.”