His name is Maxime Rooney. You’ve never heard of him before. The only Rooney you and I know of is, of course, Wayne Rooney — the football star of Manchester United.

Maxime is 14. And, guess what? Though he’s lived in the US all his life, he’s half Filipino. Maxime is a swimmer. Not your ordinary varsity star — but someone whose best times on the pool can rival those of a younger Michael Phelps.

It was Harry Radaza, the sports czar and City Councilor of Lapu-Lapu City, who emailed me this amazing find a couple of weeks ago.

“I watched this kid named MAXIME ROONEY compete 2 weeks ago in a lot of different swim events,” Harry said. “He blew out the competition (they were 18 year olds and he is only 14).”

Of the thousands of Michael Phelps-wannabes in America, he is the young Michael Phelps. Want to hear even more scintillating news? When Phelps joined the 13-14 years old category, his best time in the 200m freestyle was 1:55.37. That ranks him 8th in the all time list in the US.

“Why am I telling you all this about Maxime Rooney?” asked Harry Radaza. “Well, his father is my cousin. His father’s mom remarried that’s why he has a non-Filipino sounding last name. Maxime is half Filipino, of course. His grandmother is the sister of my uncle, Congressman Radaza. She grew up in Lapu Lapu City.”

Harry, his wife Mayann and their son Zach were fortunate because, just a few weeks ago in the US, they witnessed Maxime’s record-setting 1:54:41 time. 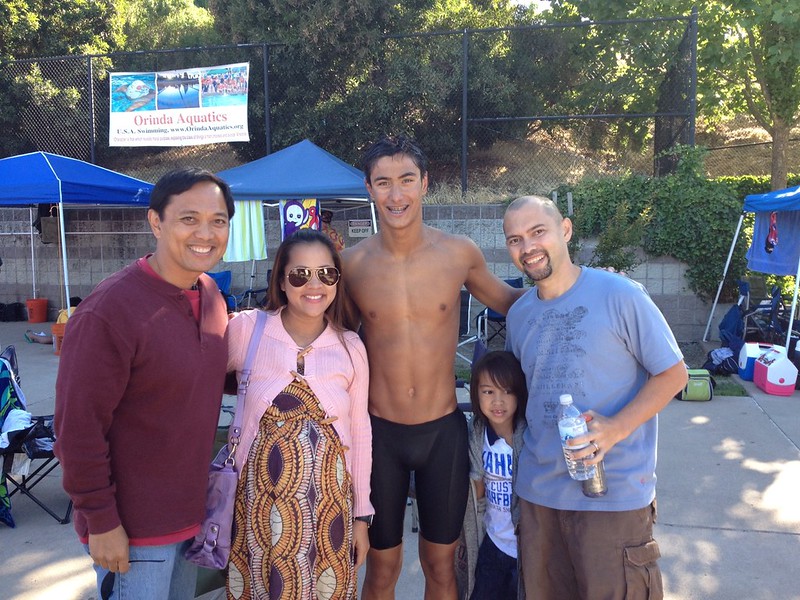 “Maxime grew up in the US but he is looking to come to Cebu next year to do some volunteer work by training swimmers there,” Harry said. “This would also be a good chance for him to meet Philippine swimming personalities and coaches as he is looking at something 4 years from now – the 2016 Olympics in Rio de Janeiro in Brazil. And guess who he would like to represent? Team Philippines, of course!”

Upon receiving Harry’s email, I forwarded this to Guy Concepcion, the Olympian swimmer who represented our nation in Seoul, Korea in 1988.

“Maxime’s times are quite impressive, especially for his age,” said Guy. “As of now, just based on who I know in the Philippine swimming scene, there would only be one guy faster than him in the 200m Freestyle, and he will race in London in August.”

That would mean Jessie Lacuna, the only Filipino male swimmer to compete in next week’s Olympics.

“For the 400m Freestyle, there’s another Pinoy training in the States, but I don’t know his current status, but his personal best time is faster than Maxime so far. Maxime’s 100m butterfly time would rank him high in the Philippines now also.

“Anyway, I hope he keeps up this impressive improvement year per year. I am glad he is looking to join the Philippines for Rio 2016. I hope in the meantime, Maxime also joins other competitions like the SEA Games, Asian Games, even the annual SEA Age Group, representing the Philippines, of course.”

Guy advised that we send Maxime’s accomplishments to the head of the Philippine swimming NSA. That’s Mark Joseph, the brother of our fellow Cebuano, Dondi Joseph, and one I’ve communicated with when I went to the Beijing Olympics four years ago.     “Present Maxime’s Filipino background, therefore, the Olympic committee can determine his true eligibility.  Most important, Maxime should always send his times so if there is an upcoming major competition (SEA Games, Asian Games, etc), then they can see if Maxime can compete. I hope he does,” said Guy.

Yes, I hope Maxime does.