Twenty years ago in Barcelona, a group of giants named Magic, Larry, Michael & Co. won the Olympic gold medal in basketball. Their average winning margin? An unfathomable 43.8 PPG. That was the 1992 Dream Team, acknowledged as the greatest ever cast of athletes assembled—of any sport. 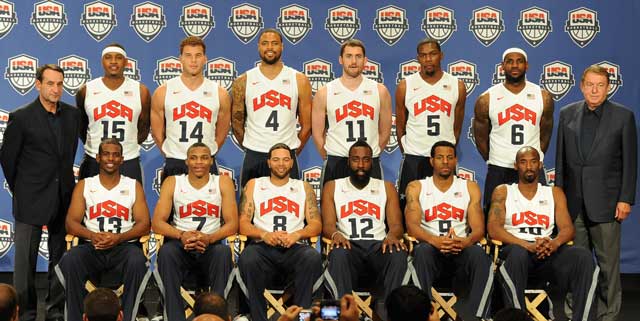 Durant? Bryant? James? Those three alone can beat the five-man squad of Tunisia.

“When I think about ’08, we were really good then. But like me, LeBron and D-Will, all of us talk about, you’ve got to think about how much better all of us are now than we were in ’08. All of us as players, we shoot the ball better. Guys are more athletic, guys are more confident. One through 12, no question we’re deeper than we were in ’08.” Who said those words? Chris Paul, the 6-footer point guard.

In Beijing, Team USA won by an average of 32.2 points in the elimination round. In the quarterfinals, they defeated Australia, 116-85. In the semis, Argentina got trounced, 101-81. And, in the finals, it was closer than expected: 118-107 versus Spain.

While 2008 was The Redeem Team, the 2004 squad was The Nightmare Team as the US (with Dwayne Wade, LeBron and Carmelo Anthony) lost to eventual gold medalists Argentina in the semis.

This 2012, the country of Barack Obama wants to ensure that they’re all-smiles during the Awarding.

One man who’ll savor his first time Olympian status is Kevin Durant who, at age 19 four years ago, was not selected. “It was almost end of the world,” said Durant, “especially seeing those guys win it—celebrating the gold in Beijing. I couldn’t stand it.”

LeBron? The 27-year-old has the opportunity to match a record that only one other human being has accomplished: Michael Jordan. In 1992, MJ earned the MVP and Finals MVP awards, the NBA ring plus an Olympic gold medal. 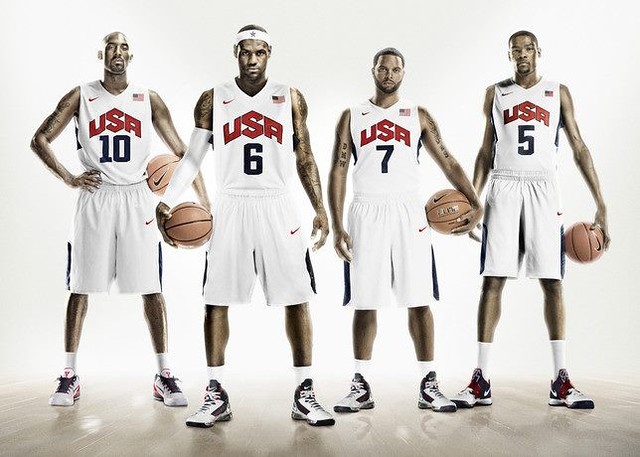 Studying the line-up, it’s obvious what Team USA lacks: height. Of the 12, only three players stand 6’10” and taller. Spain has the Big Three: Marc Gasol, Pau Gasol and Serge Ibaka—two brothers who are All-Stars plus a player who led the NBA in blocked shots (3.7/game) last season. Are the Americans concerned? Ever the confident people, they say, No way! As their one true center, 7-foot-1 Tyson Chandler puts it, “we’ve got some hybrids.”

USA Basketball Chairman Jerry Colangelo answers this lack-of-big-men concern: “People keep throwing Spain in our face, ’What about the Gasols?’ And I say, ’Well, what about the Gasols? Our guys play against them every day. And matchups always go two ways. They have to be able to guard our quickness, our speed, our versatility, and so I’m not really concerned about that.” He added: “There are a lot of 6-9 and 6-10 guys who are much better than 7-footers.”

“The United States will rely on the same formula it did in winning the gold medal in Beijing when it overwhelmed every opponent with its full-court pressure and transition game—until the final, when it took scintillating shooting to hold off Spain,” wrote Fox Sports’ Billy Witz.