Happy Easter! One of our best decisions during the Holy Week was to attend the Triduum Retreat at the Sacred Heart Parish—facilitated by the Xavier School president, Fr. Johnny C. Go, SJ, one of the most articulate, funny and inspiring of speakers. He provoked us. He allowed us to reexamine our past, sinful life. He spoke about forgiveness.

This Holy Week, I also got to read two articles perfectly-timed with Lent.

“Pacquiao steps aside for the true Champ” was written by ABS-CBN’s Dyan Castillejo. The former tennis ace (she was No.1 in the ‘80s) published it on Good Friday, April 6.

“A new Manny Pacquiao” is the second piece and it was penned (last March 31) by Ronnie Nathanielsz of Manila Standard. 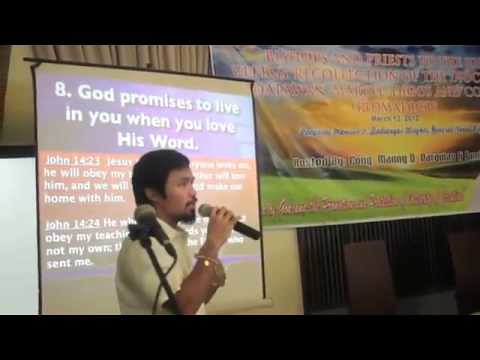 These articles talked about Pacman giving a life-sharing during the ABS-CBN Christian Fellowship last week, on March 29.

“Umiinom, sugal, bar, babae…” Pacquiao was quoted by Dyan. As you and I know, as good as Manny was inside the boxing ring, he was bad outside. “Dati dasal ako ng dasal,” Manny admitted. “Simba ako every Sunday pero Monday to Saturday lahat ng kalokohan ginagawa ko. Hindi natin maloloko ang Panginoon.”

Now, four months since opening the Bible, he’s sold his fighting cocks and deleted the mobile numbers of his multiple girlfriends; instead, he’s transformed those vices into prayer.

“Manny attributes his spiritual awakening and transformation after truly discovering the author and subject of the Bible, Jesus Christ,” said Dyan. “He said he repented from his sin, rededicated his life to Jesus and went on a quest to learn as much as he could about his Savior and how to get closer to God.

“‘When I first read the Bible, I couldn’t understand it. I wanted a bible study in the morning and in the afternoon. I felt my day wasn’t complete if I didn’t read the Bible,’ he shares.”

Two Bible passages were quoted by Dyan as among Pacman’s favorites:

Joshua 1:8: “Keep this book of the Law always in your lips. Meditate on it day and night so that you may be careful to do everything written in it. Then you will be prosperous and successful.”

Jeremiah 29:11: “For I know the plans I have for you, says the Lord, plans to prosper you and not to harm you, plans to give you a hope and a future.”

Those same Bible verses I treasure. Why? Because they’re positive and speak of a great future if you follow the Lord.

At that ABS-CBN event, Manny was accompanied by Jinkee and their four children. He was also with Pastor Jeric Soriano and, upon arrival at the TV station, introduced his group as the “Pacquaio Word Worship” team. (Quick question: You think Manny will remain a Catholic? I hope so.)

RONNIE. TV and newspaper personality Ronnie Nathanielsz was also at the same event.

“We were impressed not just with the facility with which he handled the role of a preacher-man,” wrote Ronnie, “but the genuineness with which he reached out to use his own life’s example as a magnet to get people to change their ways and to believe in the word of God and to learn to love Him like never before.

“There was, on Manny’s face, a look of sometimes childlike innocence. In many ways, we felt it was a reflection of his transgressions being washed away by genuine repentance and a new Manny Pacquiao being born again—and we hasten to add —within himself.”

After I read Ronnie’s column, I emailed him. Here’s what he sent back yesterday:

“John: I’m glad you liked the piece I wrote. It was from the heart because I could sense the change within him and his sincerity.

“In the beginning he asked the huge crowd at the ABS-CBN Dolphy Theater whether they had eaten and then responded by saying that ‘Man shall not live by bread alone but  by every word that comes from the mouth of God.’

“He repeated the story of his dream where God asked him why he had gone astray and said he had wept in his dream and when he woke up his pillow was soaking wet.