I’ve never been to Monte Carlo. But my wife Jasmin and her whole Mendez family did, back in 1993. Says Jasmin: “Monaco is one of the most picturesque locations in the world. You’re standing up on a hill, overlooking the Mediterranean Sea, gazing at multi-million dollar yachts and Lamborghinis. It’s Europe’s rich-and-famous playground.”

One man who calls Monte Carlo his playground stands 6-foot-1, weighs 188 lbs. and is tennis’ version of The Gladiator: Rafael Nadal. 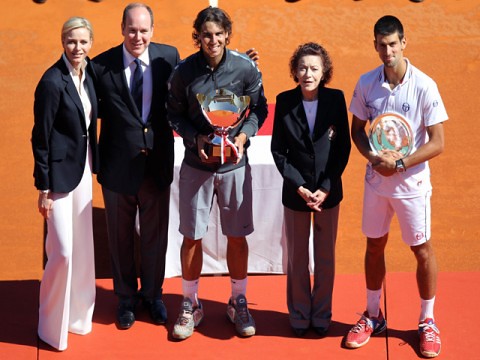 Isn’t he the world’s happiest person today? He is. After losing to Novak Djokovic the last seven times, all finals, he won last Sunday on the red clay of Monte Carlo, 6-3, 6-1. Vamos, Rafa!

“Nobody beats Rafa eight times in a row!” as if he was to scream to the world. Now, Frank Malilong, the lefty lawyer, can exhale a huge sigh of relief. His idol won. Same with Manny Sainz, Bob Lozada, Noy and Amale Jopson, Fabby Borromeo, Ernie Delco and millions of other Rafa-natics!

“Monte Carlo is the most beautiful Masters 1000 tournament for me,” Nadal said. “To start the clay-court season winning here is an amazing feeling. To beat Novak in a final after losing a few is an important result for me. It was important to break this series and to do it here – it’s perfect.”

Rafa’s eighth victory in one event is not only amazing—it’s outrageous. It’s not fantastic; it’s irrational. Monte Carlo is a Masters 1000 tournament—one of Earth’s biggest in tennis. Starting 2005, he’s won every single match.

“To have eight victories, you must be lucky, you have to have no injuries, perfect conditions for eight years in a row. That’s the first thing,” said Nadal. “And you have to be playing almost perfect to win eight titles in a row, especially in a Masters. The best in the world always play – you have to win against the best.”

In all these eight years—take a deep breath on this ludicrous statistic—Nadal has lost only six sets. He lost zero sets this 2012. And won $603,000 to increase his career total to $48 million. No, our ‘Man… Pac is still richer, but $48M translates to over P2 billion pesos. Wow. And this excludes Nike’s dollar payments.

On the significance of last weekend, Peter Bodo, my favorite tennis scribe, wrote this: “This is also a record 20th Masters title for Nadal, and perhaps most significantly if not most glamorously, his first tournament win of any kind in 10 months—since he won the French Open in early June last year…

“This overwhelming win may has enabled Nadal to hit that reset button for which he’s been groping for so long now, going all the way back nearly a full year to Madrid, where Djokovic pulled a nasty surprise on the then-No. 1. He pummeled him on clay, a feat that by then many had consigned to the realm of the impossible.”

I’ve had the chance, twice, to watch Mr. Nadal in person. The first was in 2007 when, together with Dr. Ronald Anthony Medalle and his beauteous wife Stephanie, I sat with Jasmin inside the Malawati Stadium in Kualu Lumpur, Malaysia. Rafa played an exhibition match against Richard Gasquet. That was a most memorable trip (two days after, it was Sampras-Federer) that included a bus ride from KL to Singapore.

Jasmin and I again saw Rafa during the Olympics. We witnessed him fall to the Beijing floor after championship point to claim an Olympic gold medal.

Why is this fierce, Gladiator-like warrior so likable? Because he’s both: humble and soft-spoken with the killer instincts of a Navy Seal. As buotan as he is during interviews and off-court, he has the complete opposite, I-will-do-everything-to-beat-you attitude when he’s inside that tennis rectangle. I can’t wait for May 17, the French Open.