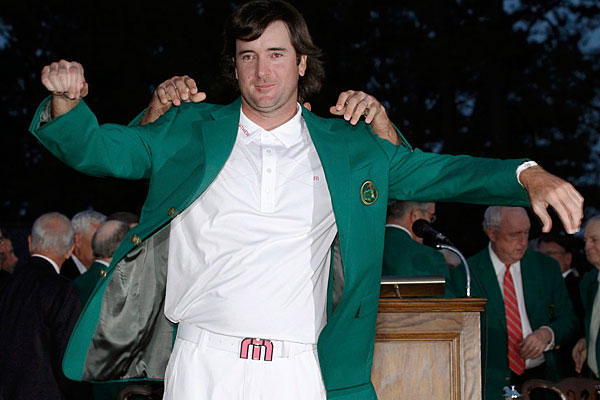 In Cebu golf, Marko Sarmiento is one of the longest-hitters off the tee. He averages 290 yards and, when the fairways are dry, that number can exceed 340. Just like Bubba Watson. “Yeah we’re both long hitters that aren’t great putters!” said Marko.

“It’s no secret the key to winning the Masters is great putting. When Tiger won his first green jacket in 1997 he didn’t have a single 3 putt!

“Bubba? He’s one of the worst putters on tour. He’s ranked 154 out of 182 but.. he’s ranked 1st in driving distance (313 yards!) and 2nd in greens in regulation. In other words, he gives himself a lot of chances for birdie because of his superior power which leaves him mostly wedges for a 2nd shot. He’s also known to be able to shape the ball any way imaginable and this has to do with his inability to hit fairways off the tee because of how much club head speed he generates. And because of his creativity, he won the Masters!

“This could not have been more evident with his 2nd shot on the 2nd playoff hole. He had to hook his ball 40 yards with a pitching wedge! Trust me, this isn’t easy to do. Having a Masters champion like Bubba is great for golf. He’s known to be very outspoken, uses a pink Ping driver and cries like a baby on national television every time he wins a tournament. The saying “drive for show and putt for dough” didn’t hold up last week!

“Unlike Rory McIlroy and Luke Donald (the 2nd and 1st ranked players in the world), Bubba (who’s now at number 4 after his win) isn’t as well-rounded. But because of creativity, raw power and a new found confidence, I wouldn’t be surprised to see him challenge them. Go Bubba!

“When Tiger won in Bayhill two weeks before the Masters, he said his swing is still at 70%. He’s been revamping it with new coach Sean Foley and I guess it’s safe to say the remaining 30% showed up in Augusta. I have no doubt that his new swing has the potential to get him back to number 1 in the world but what I do doubt is his health. With four surgeries and a WD in the World Golf Championships earlier in the year because of some soreness, who knows how sturdy that left knee is. He’s only 36 and in golf years that’s still fairly young. If you also consider his incredible work ethic, he may not have enough left in the tank to break Nicklaus’ record of 18 Majors.”

“Gen Nagai, CCC’s star rookie in the PAL Interclub, is perhaps the biggest Bubba Watson fan in the entire island of Cebu. Just recently, he even had his driver painted pink.

“Last year, Gen was able to visit the headquarters of Bubba’s equipment sponsor, Ping Golf, in Scottsdale, Arizona, to be fitted for clubs in their special driving range. Of course, the first thing he asked the people there was about Bubba.”

Said Gen Nagai: “They said Bubba always visits there as much as twice a month just to hang out. He is quite friendly and fun. But he is also weird because he tries shots that no other pro would try. For example, he would face the other way and try to hit the ball under the roof, then over the trees, then into the putting green.

“Bubba is also the only Ping-sponsored pro who can hit it over the boundaries of the range which is over 350 yards away. Other Ping pros include Lee Westwood, Louis Oousthuizen, and Mark Wilson.

“They said that while Bubba is known for hitting the ball very long, he has incredible touch and feel, and attempts a lot of shots out of the ordinary using his creativity and imagination.

“Bubba also loves hot colors, with the text of his clubs having colors such as pink.”

Jovi continues… “After hearing Gen’s stories about what the people in Ping said about Bubba and his incredible shots in their facility, it was less of a shock to see his 40-yard hook with a wedge from over 150 yards below and around the trees in the second playoff hole that sealed the victory in the Masters.

“My take on Tiger: two tournaments ago in Bay Hill he just won convincingly. He may have struggled in the Masters but it’s just one tournament. Rory McIlroy and Luke Donald quietly had mediocre performances too but it slipped under the radar because they are not scrutinized as much as Tiger.

“If a Filipino got invited to play the Masters and made the cut, he would probably be hailed as the greatest Filipino golfer of all-time. But if Tiger just makes the cut and fails to contend, people think he is a goner. Tiger is a victim of his greatness.

“Tiger upped the ante during his heydey, and the new breed of players led by McIlroy have risen to the challenge elevating their games to that level. At 36 years old and with new young and fearless competition, Tiger will never dominate like he once did but that doesn’t mean he will not win anymore. Nicklaus won 3 majors after turning 40. The more pressing X-factor would be Tiger’s health.”