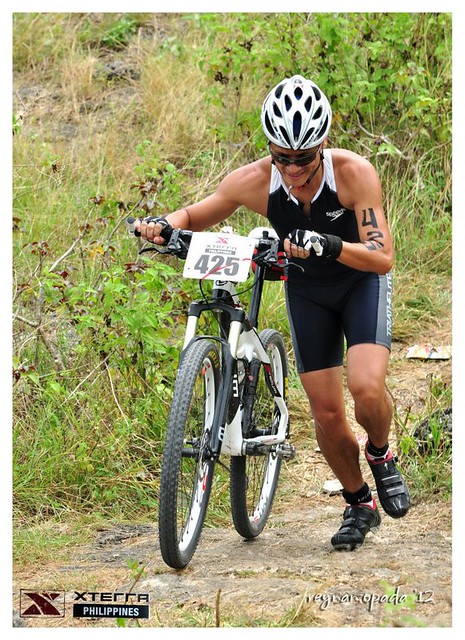 MTB stands for mountain-bike. It’s that vehicle on two rugged tires with a flat handlebar that we used to maneuver the treacherous landscape of Liloan during the XTERRA last Sunday.

After my “waterloo” (the water, open-sea swim) was done, it was off to the 35-km. MTB ride. I loved it. You’re outdoors. You climb rocks and descend on slippery sand. You pedal amidst thick grass and brake once a giant boulder glares at you. After my 14:39 swim time, my bike ride was 2 hours, 44 minutes. Not fast; conservative. Early on my first of two loops, my three CO2 bottles fell. Had I gotten a flat tire… Oh, no. 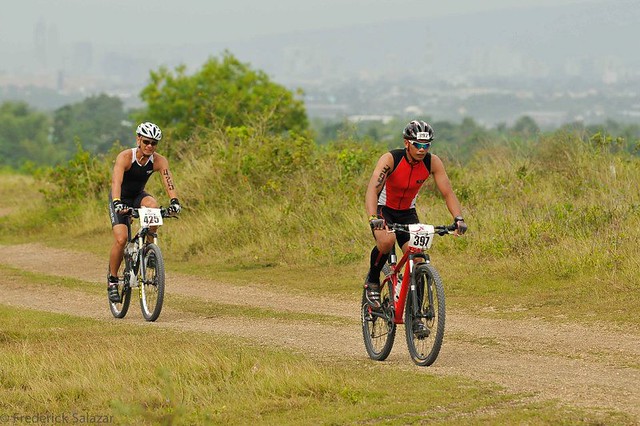 Thank, God, that didn’t happen. The one occurrence that I also avoided did not transpire: meeting an accident. With such a technical and scary bike route—the architect of whom was Architect Miguel Flores—not getting battered or wounded was the goal. Another “Thank you, Lord” moment, I only fell once with a minor hip bruise.

If you’re a MTB’er and didn’t join XTERRA, you ought to drive to Liloan soon and try the experience. We passed a small opening in-between two bahay-kubos after ascending a steep climb. We descended (I walked) the famous Bagacay Point Lighthouse that’s now, according to Gov. Gwen Garcia, been renamed “graveyard” instead of “parola.”

Porter Marina? Beautiful. We entered the enclave surrounded by yachts and pedaled to the tip where we circled the gazebo. The Gatorade station awaited us. Guess who I saw there? A Cebuano whom I admire the most, Dr. Wyben Briones. He helped with his team from the All-terrain Medical Relief Org (AMRO). 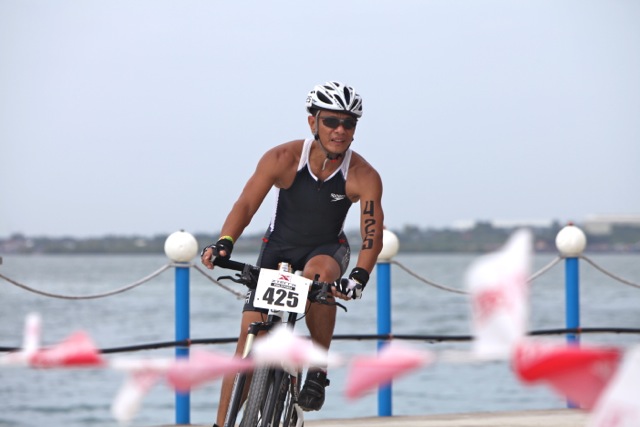 The cheerers? I’ve joined numerous marathons and I’ve never witnessed as many loud voices—especially children—than four mornings ago. Because you bike on narrow paths, the residents troop out to watch and cheer. In the schools that we passed, the elementary girls and boys shouted, “YOU CAN DO IT!” Well-orchestrated by Mayor Duke, the Liloan residents provided extra boost to fuel our tired legs.

Not only were the spectators nice but the pros were, too. Before Ben Allen zoomed past me, he signaled, “Will pass through the right!” As he—and the other pros—would zip through, they never failed to say, “Thank you” after the pass. Amazing. This is the beauty of this sport. You not only get to compete right beside the world’s elite—but they’re courteous and respectful. 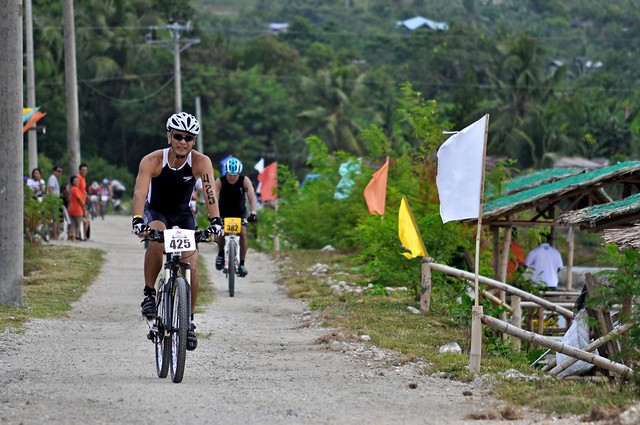 RUN. Since I joined the Lite, my run was 5K. After three hours of swimming and biking, the body gets weary. Still, not to have drowned nor gotten injured (yes!), the run was extra fun. I clocked 38 minutes. We zigzagged through off-road ground and hopped towards the beach. We ran beside the Liloan shoreline and, upon reaching the tip, had to wade through knee-deep waters for over 100 meters. I thought this was a swim-bike-run triathlon… Are they adding a swim as the 4th and final obstacle? Ha-ha. 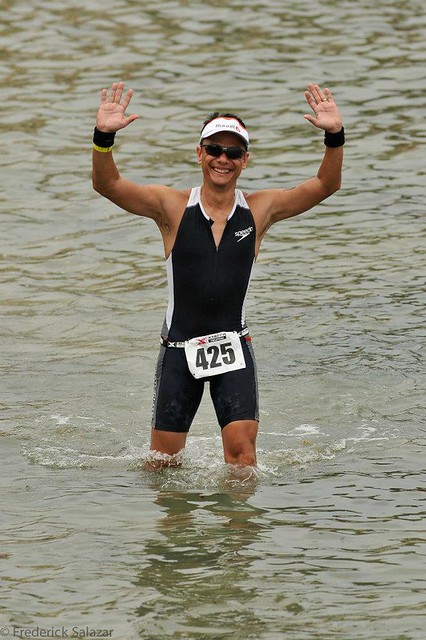 After 3 hours and 36 minutes, with Jasmin, Jana and my mom Allen waiting at the finish, I crossed that line with arms raised high. Yes!

NOTE: I got a phone call past 4 P.M. when I reached home. It was Caecent Magsumbol of The Freeman. Did I hear the news? she asked. Oh, no. Not a terrible accident on a participant, I thought. I was in 2nd place! No way, I said. No way. In my 40 – 44 age bracket (Lite), I placed No. 2 behind Jun Barcenas. Wow, hard to believe! (Before you get too excited: excluding Goyo Larrazabal, who didn’t show up, we were only seven in the age group. Still, the trophy looks good!)

BEN ALLEN STORY. Two days before race day, Ralph Sios-e and I visited Amara for a practice swim. As we finished changing and were about to leave, a man approached us. Can I hitch a ride? he asked. He was alone and had no vehicle ride back to the city. Sure, we said. We didn’t know him but he needed help. But just as we were packing our things, Jacs Jacalan drove by. He, Tenggoy Colmenares and Jomer Lim were ready to go… and so he rode with them instead.

At the Carbo-loading Party the night after, Jacs tells me: remember that guy who rode with us? His name is Ben Allen. He was Xterra champion in Guam the week before. Simple, ordinary-looking fellow but he beat all the top-rated elite pros. We saw Ben later that night at CICC and, like he was when we first met him, he was relaxed and had none of that “celebrity air” found in others. It turns out, Ben was a P.E. teacher in Australia and had no sponsors. He joined and needed to win to earn enough money to compete!

The next morning, Ben Allen obliterated the field—winning in 2:30. His is an example of this adage: Nice guys finish first.