“The marathon is a charismatic event. It has everything. It has drama. It has competition. It has camaraderie. It has heroism. Every jogger can’t dream of being an Olympic champion, but he can dream of finishing a marathon.” – Fred Lebow, founder of the New York City Marathon.

Those words are true. A rare number of Filipinos have ever joined the Olympic Games. No Pinoy—since we joined in 1924—has won the gold. But the marathon? The distance of 42.195 kms.? Running by foot—not riding the car, motorcycle or bike? Anybody—yes, that means any body, slim or heavyweight; teenager or a 78-year-old like Raul Cepeda—can achieve “the feat of feet” called the 42K.

As you read this, thousands of runners have swarmed the streets of Cebu. They’re along Osmeña Blvd. They’ve converged at the Cebu I.T. Park. They’re sprinting in Escario, Gorordo or inside the SRP.

The first participant when the online registration was opened several months back? He was from Germany. One Kenyan runner landed in Cebu two days ago. Armed with a PR of 2:13, he vowed to break the CCM 42K record.

Like our very own Sinulog, the Cebu City Marathon has become international.

Apart from those running the 42K, there will be thousands more joining the 21-km. run. Two nights ago during the Race Briefing at The Terraces of Ayala Center Cebu, I said that the 42K/21K runners are lucky.

“Cebu is one of the oldest and most historic cities in the Phils.,” I said. “And, as we planned the route a few years back, we made sure that runners get the chance to pass through the most iconic landmarks of Cebu… Provincial Capitol, Fuente Osmena, Colon St. (the oldest street in the nation), Magellan’s Cross, City Hall, and Plaza Independencia. Runners also pass through the Tunnel, the only time of the year that happens; the SRP is also closed for the safety of all participants. Enjoy the scenery!”

To all CCM participants, congratulations!

QUOTATIONS. Let me leave you with these inspiring words…

“I always loved running…it was something you could do by yourself, and under your own power. You could go in any direction, fast or slow as you wanted, fighting the wind if you felt like it, seeking out new sights just on the strength of your feet and the courage of your lungs.”  – Jesse Owens

“A marathon is like life with its ups and downs, but once you’ve done it you feel that you can do anything.”

“I run because it’s my passion, and not just a sport. Every time I walk out the door, I know why I’m going where I’m going and I’m already focused on that special place where I find my peace and solitude. Running, to me, is more than just a physical exercise… it’s a consistent reward for victory!” – Sasha Azevedo

“I’ve learned that finishing a marathon isn’t just an athletic achievement. It’s a state of mind; a state of mind that says anything is possible.” – John Hanc

“We run, not because we think it is doing us good, but because we enjoy it and cannot help ourselves. The more restricted our society and work become, the more necessary it will be to find some outlet for this craving for freedom. No one can say, ‘You must not run faster than this, or jump higher than that.’ The human spirit is indomitable.” – Roger Bannister

“People ask why I run. I say, “If you have to ask, you will never understand”. It is something only those select few know. Those who put themselves through pain, but know, deep down, how good it really feels.” -Erin Leonard

“Running is the greatest metaphor for life, because you get out of it what you put into it.” – Oprah Winfrey

This Sunday, lives will forever be changed. Thousands will run the Marathon of Cebu called the Cebu Marathon. Nearly 1,300 brave-hearts—many of them first-timers—have enlisted to run the 42.195 kilometer race called the Marathon. Another 1,200 are joining the 21K. Over 4,000 are expected to run the 5K. Five days before the gun start, here are a few pointers… 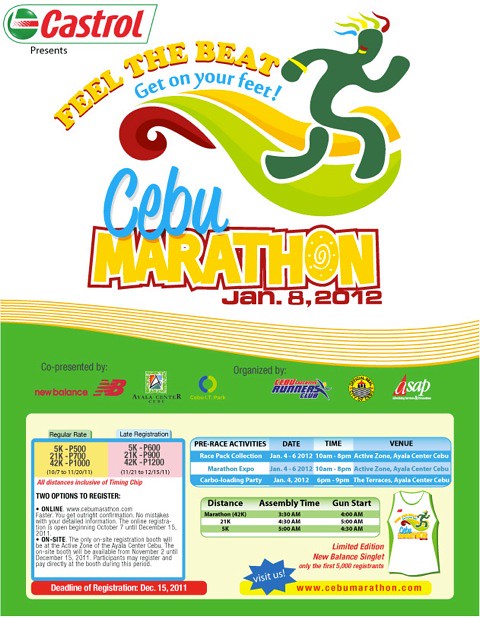 1) CHECK WEBSITE. Log on to www.cebumarathon.com. We’ve posted all the participants’ names — 42K, 21K and 5K. For any concerns, email us at [email protected]

2) VISIT RACE EXPO. Beginning tomorrow until Friday, race packs will be available for distribution. But here’s an important note: For tomorrow (Wednesday) only, the race packets of the 42K and 21K registrants will be distributed first. (All categories will be open Thursday/Friday.) CLAIMING: To receive your race pack, bring the email confirmation or claim stub that was sent/given to you.

3) JOIN CARBO-LOADING PARTY. If you’re a CCM participant, hear the final instructions and listen to top-notch runners during the Friday (Jan. 6) night Pre-Race Party. This will be at The Terraces of Ayala Center and will start 6 P.M. Load up on pasta and join the fun before the run.

4) RUN THE 5K. For those who failed to register on time last December, here’s good news. We are re-opening the registration during the Race Expo only for the 5K runners. 5K ROUTE. What’s exciting about the 5,000-meter Fun Run is the route: from Cebu I.T. Park down to Juan Luna Avenue… turn right towards the Cebu Business Park (passing along the Pag-Ibig Bldg.).. then run up to Escario St. (Parklane Hotel) before turning right to Gorordo then to JY Square … finishing at the Cebu I.T. Park.

5) TUNNEL & PLAZA. This January 8, the entire SRP Tunnel will be closed from 12 midnight until 9:30 A.M. for all the 21K and 42K runners. This is special. It is only during the Cebu Marathon that this 800-meter underground stretch of roadway is available for you to walk and run. Enjoy the tunnel!

6) PLAZA INDEPENDENCIA RUN. This park is beautiful. One of the highlights of Michael Rama’s mayorship, passing in-between the Magellan’s Cross and the City Hall then traversing inside the Plaza, we’re proud to call this running city… Cebu.

7) SRP IS CLOSED. The SRP—thanks to the joint efforts of the city governments of Cebu and Talisay—will be closed from vehicular traffic from 12 midnight until 9:30 A.M. this Sunday. Yes, I know this means inconvenience for the motorists—but it only happens once a year. And this is meant to ensure safety for the nearly 3,000 runners of the 42K and the 21K. SRP CUT-OFF TIME. For the runners, this means a cutoff time of 9:15 A.M. along the SRP and inside the Tunnel. If, by this time (which is 5 hours 15 minutes after the 4 A.M. start), you are still along the SRP/Tunnel, you will be asked to stop and ride the bus.

8) DRINKS GALORE. Nature’s Spring, our very own Cebu brand of water, will refresh all participants this weekend. For the sports drink, Pocari Sweat will be stationed along portions of the 21K and 42K route.

9) REST. With only five days left before the historic 01-08-12 date, it’s time to relax and recharge. The next few days is no time to cram your training. It’s better to be undertrained than over-trained.

10) RACE BIB. In case of emergency, we urge all runners to print the name of the person you wish to be contacted at the back of your race number. With several doctors as part of the Cebu Executive Runners Club (CERC), we are putting a lot of emphasis on our medical response.

11) WEAR COSTUME. Plenty of prizes will be given away to individuals and groups who don the best Sinulog-themed attire. Run and be seen.

12) FEEL THE BEAT, GET ON YOUR FEET! Thanks to the super couple named Meyrick “Jacs” and Perl Jacalan, the CCM has that perfectly-worded slogan. It’s days before the Sinulog and what better reason to run. You can dance, strut, glide, sprint or crawl. However you want to run the marathon, be sure to finish!