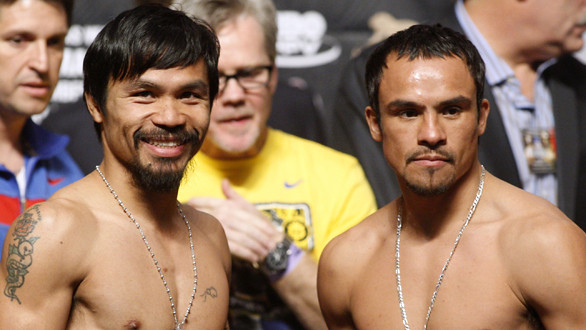 Why do we feel so disappointed? First, our expectations were too high. KO by Round 3!!! Not farther than the 6th!! Round 10… the very, very latest!

Everybody anticipated a knockout. The bout wasn’t even about Manny winning or losing—that would have been a stupid question when you pit the world’s No. 1 against a “senior citizen.”

Prior to fight night, Manny was already declared the victor. The only question was, “Which round?” Anything less than a knockout—even a 12th round unanimous decision—would have been labeled a failure. Boy, were we shocked last Sunday!

We have been spoiled by Manny. We have grown accustomed to the machine-gun-like, rapid-fire, all-offensive barrage by MP. We saw how he trounced Oscar. We witnessed his mauling of Hatton. Margarito? Wasn’t his face bloody Mexican red? Same with Diaz? And Barrera? And everybody else since 2008? Yes, yes, yes, yes.

For with Manny, he has set the highest standards of pummeling and hammering and battering enemies. He has spoon-fed us, each time, with Michael Jordan-like performances.

He’s not Michael Jordan. He’s human. He doesn’t fly. He may be SuperManny but he’s no Superman.

Are these absurdly high expectations of Manny justified? Of course. He’s Ring Magazine’s P4P best. He’s the 10:1 favorite. He earns P1,300,000,000 per bout! You don’t pay someone that much gold without expecting the most golden of performances. And hasn’t Manny wowed us for over three years? Last weekend was his 15th straight win. Think about that. 15-0. That’s unheard of in this one-on-one, all-contact sport like boxing. You win some, lose some. Not Pacman. He wins and never loses.

He should have against Marquez. Conduct a survey among friends or boxing experts and the conclusion is similar: the judges were cross-eyed. Were they viewing a different game? Wasn’t it obvious?

But what we clearly saw was a different, almost-lousy Pacquiao. Here’s an interesting revelation: I don’t recall, even once, Manny connecting on a solid, powerful punch. Not once. For sure we’ll watch the replay but, based on recollection, there was not even one shot that staggered and wobbled Marquez. Right? Unbelievable. So un-Manny.

But, you know what? If you think back on his Mosley bout last May, didn’t we witness traces of the same? Manny then wasn’t impressive. Sure, Mosley backpedaled and ran the 42K inside the ring. But Manny was not the same aggressor as before. He did not assault and bombard Mosley.

Same with two days ago. He did not besiege J-M-M like he did Miguel Cotto. He did not jump and pounce on him. Yes, he bobbed left and right. Manny The Gladiator was left sitting in his Batasang Pambansa office. Instead, he was Manny The Tentative.

FLOYD. Which brings us to Mr. Mayweather. Is there a person who laughed and celebrated more than Floyd? The way he mauled Marquez in their September 2009 clash versus last weekend… you’d think Manny is no match against Money.

True. In fact, with that subpar showing, I’d declare that the No.1 pound-for-pound title be switched places… from Manny to Money. At least, for now.

Not that I like Mayweather. Everybody detests him. But against the same Mexican in the same weight, the American beats the Filipino. So, you can imagine the even-more-bloated ego of the already-egomaniac Floyd. Which brings us to a point that has circulated the rumor circles: Now that Floyd The Counterpuncher thinks he can easily beat Manny, will he say yes to May 2012?

Yes. And what a finale that would be for Pacquiao. Erasing the doubts of his loyalists, he reemerges for one final duel and silences the loudmouth. Then he retires. That will be a Michael Jordan moment.