The former Cebu City Sports Commission Chairman plays golf, tennis and airsoft. He kayaks, mountain-bikes, and has climbed the peaks of Mr. Talinis and Mt. Makiling. He has gone sky-diving five times. Triathlon, twice. The Australian Open tennis? He saw Agassi in 2004. But all these games pale in comparison to the passion Atan feels for running. Here’s my latest interview with Mr. Guardo…. 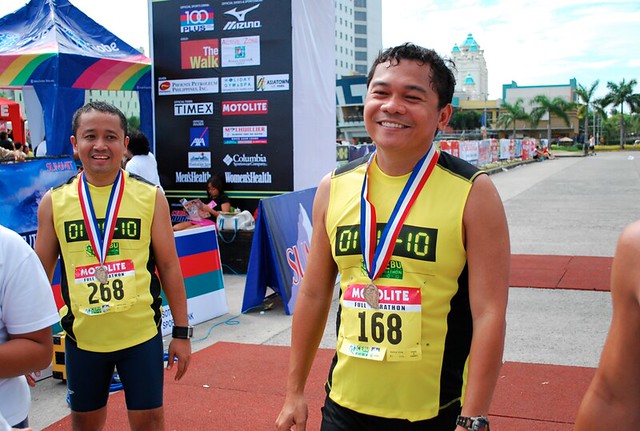 Running on the road or running for office? “When you run a marathon the first time, it’s one of the most difficult experiences in your life. You’ll endure all kinds of pain and misery. And when you’re just a few kilometers away from the finish line, you’ll hit the wall. You have consumed all your energy and you can barely walk. You’ll entertain all negative thoughts. You go standstill. You want to give up. I’ve hit the wall several times but, thank God, somehow I am able to breakthrough. I’ve done several marathons and every time I hit the wall, I’ve managed to figure out a way.

“In politics, I’ve hit the wall twice. I can’t seem to break through. It’s something I’m still trying to figure out.”

Why run? “I started in 2000 when running wasn’t as popular. The reason is because I want to keep fit. I used to have high blood pressure and elevated levels of blood sugar. But because of running, I am able to keep my doctor away. I used to weigh 175 lbs. but now I’m down to 150. Running is also a way of socializing. I look forward to the weekend runs, especially the big events, coz thats one way of hanging out with friends. It’s also bonding time with your family.”

Best experience? “I love to travel and when you incorporate that with joining a marathon, it’s a blast. I remember watching the Pacquiao-Margarito fight in Dallas, Texas last November. The fight ended at 12 midnight and I had to immediately drive 500 kms. down to San Antonio. I arrived at the hotel at 5:30 am (you definitely drive fast on freeways), changed clothes and went straight to the starting area to catch the 630am gun time. I wasn’t tired at all because there were thousands of people who joined the San Antonio Rock n Roll marathon. To have the energy and be able to finish that marathon was very special. Probably I still had that adrenaline celebrating Manny’s victory.”

On pain: “Probably because I don’t really train as hard (I only do 15K, the longest for a marathon; I get bored training), that’s why I experience pain and fatigue usually from 30K to 35K. But as I gained more experience, I realized that pain is all mental. If you let pain and fatigue defeat you, you’ll certainly crawl to the finish line.”

On barefoot running: “Last Sunday, I ran the 21K barefoot for the first time. I only had two 5K barefoot runs before. Running the 21k on barefoot was painful, with all those blisters on your toes. But I just had to mentally erase the suffering and it turned to be one of my most enjoyable runs ever. This weekend, I’m going to Panglao, Bohol for my next 21k barefoot run. I feel stronger and have better endurance. I am seriously thinking of giving away all my running shoes. I want to join the 100k ultra run from Bogo to Cebu City this november… barefoot! That would be special.”

On traveling: “Last November, I did four marathons in four weeks. Sta Clarita (LA), San Antonio, Cebu Ultra and Quezon City. The last few weeks, I did Kawasan, Milo, Aboitiz and the 21K University Run. I love joining big events. I love running with so many people. I love racing, even though I’m slow. I love going to different places. While running, I try to enjoy watching the scenic routes. The   Santa Clarita, Hong Kong, Cebu City and Kawasan marathons had beautiful routes. The people along the routes in LA, Kawasan and Camsur were friendly.”

Who do you admire? “Cebuano runners like Rening Ylaya and Raul Cepeda, who are still running in their 70s and 80s. If I can continue running marathons year-in, year-out, until I get to that age, who knows how many marathons I can finish? Hopefully, my Arthro supplement will continue to power my knees!”

Advice? “Enjoy and have fun. I’ve seen some who quit running; probably they got burned out. Sayang. They probably overtrained. Don’t get too consumed on the PR (Personal Record). Running should be fun and enjoyable. It should be a way of life. The feeling of excitement I have every time I pin the race number on my jersey every Saturday evening is still the same feeling I have the very first time I ran. It’s addictive!”