A non-golfer, I woke up early yesterday. Like a golfer. You see, if you play this sport of hazards, hooks, hole-in-ones and handicaps, you’d have awoken early the past four mornings. Nilo Domingo, the best golfer from our Rotary Club of Cebu West (handicap: 9), had wide-open eyes yesterday from 1 to 7 a.m. He watched The Masters. Like most golfers. It was the 75th anniversary of the greenest of all greens. And, it might have been the most tumultuous finale at Augusta.

“This Masters had the most topsy-turvy leaderboard with perhaps the most lead changes ever,” said Jovi Neri, one of Cebu’s best. “This is probably what makes it unique, but all the Masters are always exciting.”

A lawyer by profession and golfer by obsession, Jovi Neri, the 2002 Cebu Country Club champion, analyzes golf as accurately as his tee shot.

The champion? Rory McIlroy! Was he? No. Supposed to be. Yes. It was Tiger Woods. A four-time winner of the green jacket, he led the field with only nine holes to play. At that late stage, TW1 is unbeatable. He won. No? He lost. Was it K.J. Choi, whom Koreans in Cebu cheered wildly while watching Samsung TV? He came close. But, no, he did not win. How about a trio of Aussies, Adam Scott, Geoff Ogilvy, and Jason Day? They were close — but preserved the tradition which states, “No Australian will win The Masters.”

The champion? Charl Schwartzel, a player I had never heard of before. Was he German? A famous brand of sausage? Why was his name pronounced “Sharl?” “The last time a winner finished four under over his last four holes was 25 years ago when a certain Jack Nicklaus won his 6th green jacket at age 46, and defied father time. What a way for Schwartzel to commemorate that historic `86 Masters with his own version of a strong finish,” said Jovi Neri. 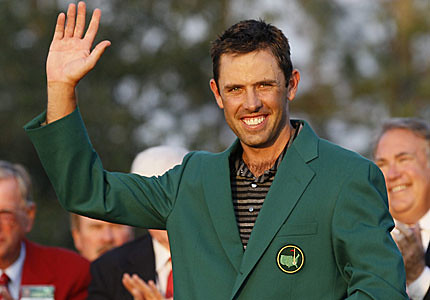 A Filipino almost won. A Fil-Aus, to be exact. As we’ve been accustomed to seeing Fil-Europeans banner the Azkals, here’s a top-notch half-Filipino who’s day, surely, will soon come. Atty. Neri explained: “Before his PGA Tour stint, Jason Day played in the Nationwide Tour (their developmental tour) and in `07 was the younger ever winner in that tour.  He is only of the most promising young players but his rise should in no way be connected with the golf development programs our country has.  If you check this interview, it seems like (1) he has never been to the Philippines, (2) he can’t speak the language, (3) he can’t even name the town where his mom was from.  So while he is a rising star and has Filipino blood running in his veins, I don’t think we can easily proclaim him as ours.  So far, Tiger is more Thai than Day is Filipino based on how they connected to their roots at the same age and stage in their careers.   http://pinoygolfer.com/2010/07/jason-day-interview-pinoygolfer-com-gets-a-few-minutes-with-the-highest-ranked-pinoygolfer-on-the-planet/”

How about today’s version of Jean Van de Velde? The man who led for three days and was poised to become the victor? “At 21,” said Atty. Neri, “you really cannot expect a golfer to handle that pressure well immediately even if he is Rory – one of the best players today. The only time a 21 year old handled Masters pressure with such ease was Tiger Woods back in `97, but then again Rory is one of the best today while Tiger is arguably the best of all-time. Rory’s time will come.”

Woods? “Vintage Tiger is having a lead and running away with the tournament.  Tiger has never won coming from behind.  He could have easily run away with this tournament if not for his putting.  Nicklaus was pronounced washed up until he won two majors in 1980 at 40 years old and then one more in the `86 Masters – so that is three majors after turning 40. You can never count Tiger out, and I am sure he has taken a lot of positives from his performance this tournament.”

Finally, explains Jovi: “The Masters is special because of traditions the tournament has that makes it unlike any other.  There is no corporate sponsorship, the field is very limited, all past champions have lifetime invitations, and they put great importance to the amateurs and pamper them well.  This is because the founder of Augusta National and the Masters Tournament is Bobby Jones – the greatest amateur golfer ever – who was the only man to ever win a grand slam in a calendar year.”