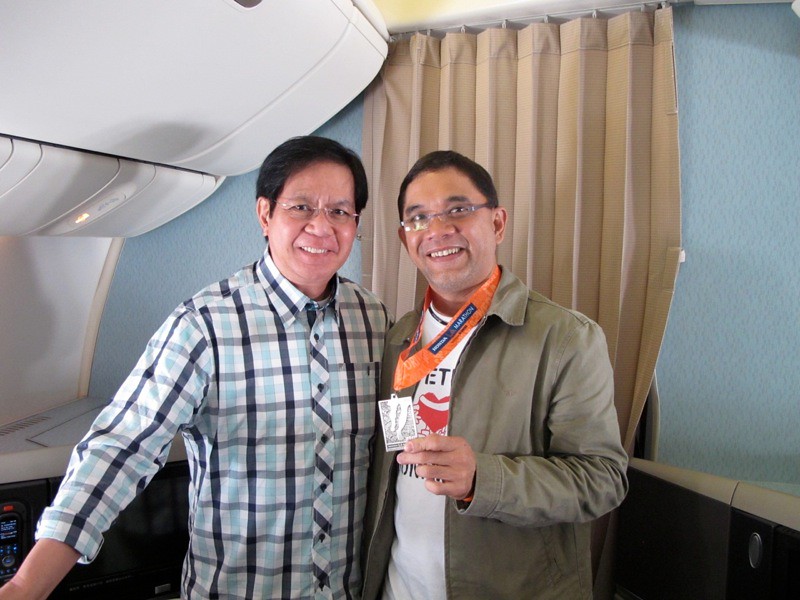 Of all the family names that inhabit our planet, the one that Sen. Panfilo Lacson detests the most is “Mancao.” It was police officer Cezar Mancao II who testified against him which led to his disappearance since Jan. 5, 2010.

Last Saturday, Sen. Lacson came home. He flew from Hong Kong to Cebu. In a “Believe It Or Not!” episode, guess which family name sat beside him in the Business Class section of Cathay Pacific? MANCAO.

Dr. Peter Mancao, a cousin of Cezar, recounts this amazing tale… “This trip, from the start was action packed! On the flight to L.A., one of the passengers had a seizure while he was on the way to the lavatory and he got a huge wound on the bridge of his wound that happened very close to where I was seated. So I got up and did some first aid. Good thing we were just two hours away from L.A.

“With the marathon itself turned out to be stormy (that’s another story), then on the return flight to Cebu from L.A. my wait at the Tom Bradley airport in L.A. turned out to be the most agonizing wait and anxiety whether I could board the plane.

“Then the trip from HK to Cebu. I was fortunate to get a very good deal on business class tickets (courtesy of Ungo runner Sheila Colmenares). As I walked in the plane I spotted familiar faces: Eva Gullas, flying in from NY, and Benson Dakay from Shanghai. As I got nearer to my seat, a very familiar person was seated next to me. I could not believe my luck! I had to run to get hold of the Phil. Daily Inquirer and check if there was any news on Sen. Ping Lacson going home. Indeed, there was. Sen. Lacson was seated next to me. It was just the two of us in that section, so I got up and greeted him ( “Good morning, Senator. I’m Dr. Mancao from Cebu. I don’t know if you remember but we met in White Gold House when you were campaigning in Cebu.”).

“I’ve never seen a guy as humble, considering his stature and the conditions he has been through. As we talked, I asked the reason for his return via Cebu. He said he wanted to avoid the media circus. And, in my first request for a photo op, he politely declined. As there was a slight delay in the departure, we continued to talk and told him I hope you don’t mind us talking because I’m a cousin of Cesar. His quick reply was he had no problem with that. We moved on to another topic and I told him, “So it was not true that you were hiding in Cebu?” He had a huge laugh.

“A few minutes before landing, I showed him my L.A. Marathon medal and explained to him how I got hooked to running. This time, he obliged to have a photo with me and my medal. When we landed, I was the first to greet him, “Welcome back!” It was such a coincidence because when my cousin Cesar returned to Manila, he was on the same plane as my dad (Dr. Mike Mancao) who was also returning from L.A.

LOS ANGELES MARATHON. “Team Cebu was divided into Team A and Team B. Dr. Yong Larrazabal and his wife Donna were in Team A (being the faster runners) while me, my daughter Mykha (who was running her first full marathon) and Chris Locsin (J&J rep here in Cebu and also her first full marathon) were Team B. We positioned ourselves with the 5-hour pace group at the start (Dodgers Stadium). 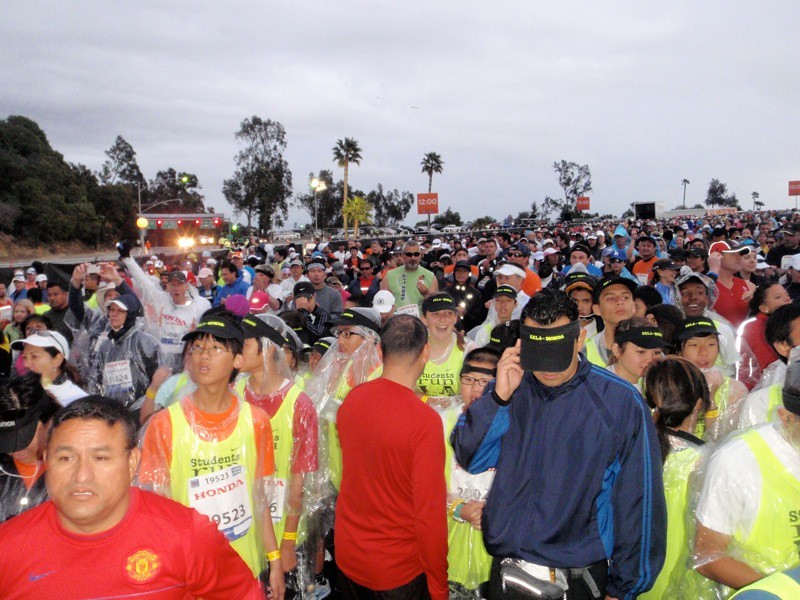 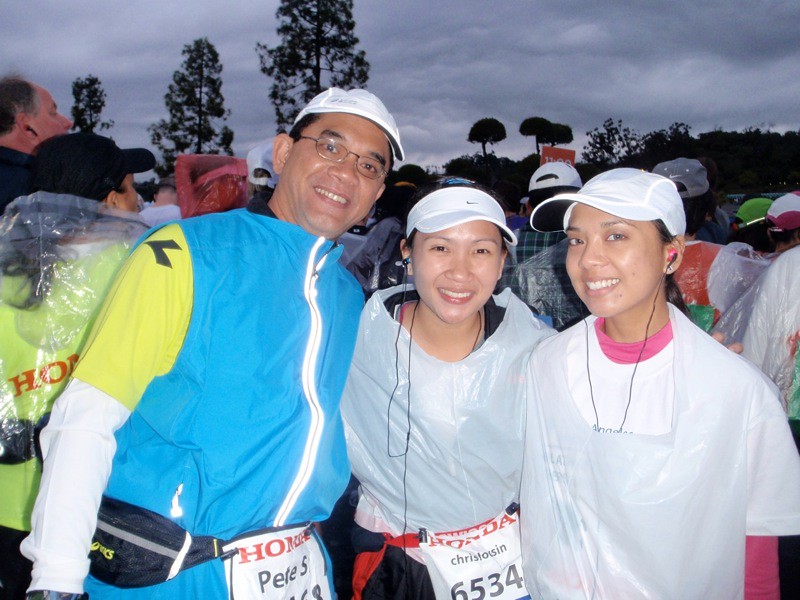 “The weather forecast for that day was heavy rain. Right from the start the rain made its presence, as it was drizzling on and off. Barely 5 km. into the race, the rain strengthens (yet the song goes “It never rains in California”) and, at some point, wind started blowing. (I heard that the LA Marathon was bought by the owner of the LA Dodgers and he managed to turn around this event as it was not getting good reviews in the past. It has one of the best routes of all the U.S. marathons but unfortunately the weather was not cooperating.)

“Mykha decides to move ahead of us as she had a 5hour finish in mind while we had 5h30m as our goal. At the 21K mark, we were still within our goal but little did we know that the weather was getting worse. The rain and wind were getting stronger. The roads were water logged plus the temperatures were dropping fast. We were doing the Galloway run-walk technique but the weather made us do more walking than running.

“At the 32K mark, we got into a medical station that provided us with garbage bags as makeshift rain jackets. We were given Mylar blankets. This got us back running but at this point were looking at a 6-hour plus finish. Runners were dropping out at the medical stations because of hypothermia. I was looking at my first DNF (did not finish) marathon. It was at this point that we decided to get back on track with the Galloway run-walk strategy and sing our way along for the next 10k.

“The finish line was another story as the Santa Monica Beach was in a fury with the storm. We had to walk another kilometer to get to the after-race finishers meeting area with strong winds blowing us off the road. When we got to the area, it was leveled-out. The tents were blown off. We had to walk back to the family waiting area aching in pain and shivering from the cold and endured the wait for our ride to Mykha’s apartment. Team B’s time: Mykha 4h56min; me and Chris, 6:55. Team A: Yong 3:50 and Donna, 4:30.”

L.A. MARATHON. “Marathon running has become my own little amazing race. Each one has its own challenges and a story to tell. I thought the Galloway run-walk technique was the answer to my prayer but now it looks like I have to pray some more. I really hate the 30th to 35th km. mark; somehow it has become my wall. I keep telling myself to add more mileage to my training but then again I don’t want to take away the fun part in doing my amazing race.

NO. 8. “I never expected to be doing marathon no. 8 at the time I ran new york. It was just supposed to be crossing out one item in my bucket list. I always swear each time I finish a marathon that that would be the last one. That is, until a few days later when i talk to Yong and James Abilla of St. James Water that planning for the next one always manages to get on the table.

LATE ARRIVAL. “I had my plane ticket booked late december 2010 and at that time was having problems with return flight. When i checked w/ the CX counter i was told that if i wanted a guaranteed booking i had to wait a week as all flights were fully booked so i had to take that chance last thursday and wow it turned out to be a punctuation mark for this trip.”