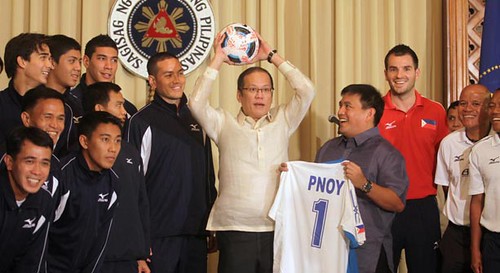 (Photo from the Phil. Daily Inquirer) 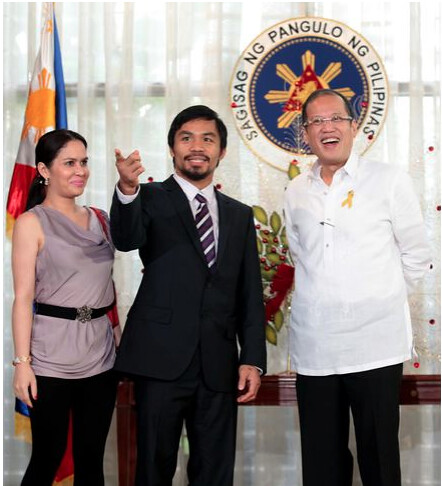 I voted for Benigno Aquino III. Prior to May 2010, I thought Gibo possessed more intelligence and charisma, believed in Dick Gordon’s street smarts, knew Sen. Manny Villar had billions more and, well, with Erap, found him funny, even laughable, during the CICC presidential debate. Yet, I voted for the only son of “The greatest Filipino president we never had.” That martyr’s name was Ninoy Aquino. I chose Noynoy because of his humility and honesty.

Given his latest “sports” announcement, I was proven right. Though insignificant to many, it speaks plenty on the person who leads our overcrowded nation of 92,000,000 people. What announcement?

Among many topics on sports, the main discussion centered on a nationwide event that’s labeled “PNG.” Previously called the “Philippine National Games” and held during the years 1993 to 1996, this tournament was to be revived this 2011. An estimated 31 national sports associations are requested to join the Olympics-patterned event. This is a magnificent boost to PHL sports. The PNG will be held in Bacolod City (mainly at the ‘Azkals home-court,’ the Panaad Sports Complex) this May 23 to 28.

What’s the difference between this PNG with the one of 15 years ago? The name. Our sports officials wanted to call it by another name: P-Noy National Games. Nothing wrong with that, right? The acronym is still PNG. The head of our nation — and our total sports program — is P-Noy. Plus, his name “P-Noy” rhymes with “Pinoy” which, of course, refers to you and me. We’re Pinoys.

P-Noy National Games. Go! But, wait. When informed three days ago about this seemingly minor change from “Philippine” to “P-Noy,” our president said, Wait… hold it right there… Why the name change? Well, said Richie Garcia, you’re P-Noy and these games are for the Pinoys. Go?

No. The person that you and I and 15.2 million others voted for displayed an act of humility. He said no. He asked the top sports officials to stick with the original name, Phil. National Games. Had P-Noy agreed with Garcia and Cojuangco, his uncle, on the P-Noy Natl. Games, nobody would have complained. Because don’t politicians employ this strategy all the time? To plaster their faces, to advertise their names, to promote their accomplishments through sports?

This latest P-Noy decision did not land on any of the major headline stories. I found it not in Phil. Star or the Phil. Daily Inquirer or in Manila Bulletin. I read it in Malaya under the title, “It’s simply called PH Nat’l Games.”

“‘President Aquino said ‘Huwag na lang and just call it the Philippine National Games’ when he asked him if we could use the P-Noy Games for the meet,’ said PSC chief Richie Garcia, who attended the one-hour meeting with POC president Jose Cojuangco Jr. and Commissioner Jolly Benitez,” read the story written by Bong Pedralvez last Tuesday. “‘The President said this event is for the Philippines so it would be best to call it the Philippine National Games,’ Garcia added.”

Here’s my hope: In the future, when our local officials concoct sporting events, that they’ll feel guilty about advertising their name. Go, P-Noy? the president is asked. No. Go, Pinoy.