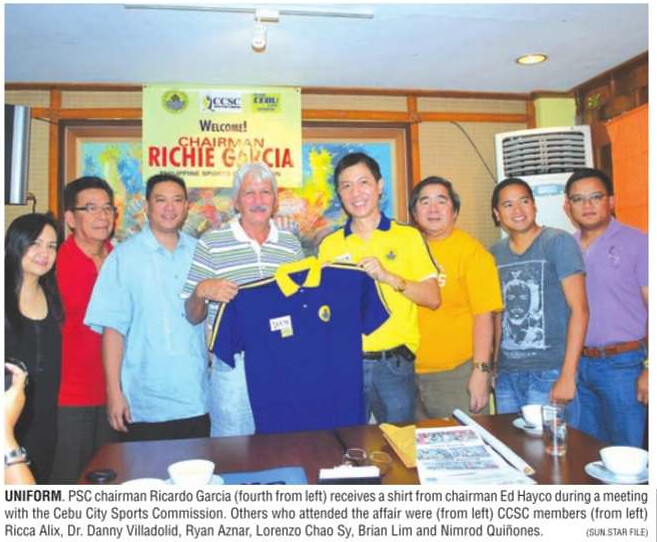 The Philippine Sports Commission (PSC) chairman holds the title as the highest-ranking sports official of our 7,107 islands. Last Thursday, thanks to Marko Sarmiento, I had a 30-minute, one-on-one chat with PSC Chairman Ricardo R. Garcia at the veranda of the Cebu Country Club. Wearing golf attire and sporting a smile after he carded a 2-over 74 in the Coral Invitational (partnering 8-time CCC champion Montito Garcia), Mr. Garcia revealed these thoughts in our Q & A:

“I started as PSC chairman last July, having been a commissioner in the past for about seven years. The responsibilities now are much, much more. I have a very good Board of Directors. We are a working board. We meet every week. We have no hidden or political agenda. In fact, we are so transparent that we post everything in Facebook. All the board resolutions and check issuances are available for the public to see.

“PSC-POC partnership? This is crucial. Today, we are two bodies working as one. The PSC-POC has never been closer. We are one. This was the same during the time of Michael Keon. In the last presidential term, the PSC-POC relationship was the worst. It was like black and white. During the SEA Games, for example, there were two sets of planes that carried both groups. There were two sets of uniforms. It was bad.

“Politics has no place in sports. Although we are all political appointees, our agenda should not be political. We have one goal: to improve Philippine sports.

“Monico Puentevalla, the POC chairman, was my schoolmate in La Salle Bacolod. We’ve been together since grade school. He graduated high school Class ’65; I finished in ’64. I was a varsity player in elementary in football and basketball. Then I moved to Taft for college. I’ve also known Peping Cojuangco. I played for the Luisita golf team. We are a good team and have teamwork.

“On the issue of Palaro: The POC suggests that we, the PSC, run the Palaro. I said, sure, we can do that. But our problem is the organization. Compared to the DepEd, which already has the structure to operate the Palaro, we don’t. The Palaro is grassroots and encompasses the entire country. We may not have the capability to operate the entire program.

“With the Batang Pinoy, we will revive it. This was the project of Monico while he was at the PSC. After Monico left, this program stopped. Now, we are bringing it back. Batang Pinoy is good because it involves, apart from students, the out-of-school youth. We will directly be coordinating with the DILG on this.

“President Noy? Unfortunately, we have never had time to sit down and talk about sports. We have sent him a letter requesting for his time but, as of now, we have yet to meet. It’s okay. I understand that he has so many other priorities at this point.

“Cut red tape. That’s one of my top priorities. Before, many of our suppliers were middlemen. We would be purchasing items at 30 percent more. The reason? These middlemen ‘magpa-utang.’ I said, ‘This is not right.’ The government is losing money. Being a businessman — and not a politician — helps. I look for ways to save. And so, for this year, we are expecting savings of P70 million. For the security guards alone, there used to be 200 guards. Now, it’s 90. Why did we need so many guards? And many of them were “ghost” guards who never even reported. And so, with security alone, we save P2 million per month. With the janitorial services, it’s P1 million per month. On those two services, that’s P36 million in savings per year. On the procurement side, I estimate savings of P20 million. On the overhead, we let go of 40 people. On electricity, we merged offices and cut down on 25 air-conditioning sets. And here’s an interesting item: on newspaper subscriptions, before, they paid P40,000 per month! Everybody had a copy. Now, it’s much less. These savings will go directly — every centavo of it — to the athletes.”

“Another issue that we are fighting is the percentage allocation from the PAGCOR funds. The law states that five percent of PAGCOR’s total revenue should go to the PSC and sports. During Tita Cory’s term, it was this. It was five percent. Then, during President Fidel Ramos’ term, then PSC chairman Philip Juico was asked by Ramos to cut the percentage to 2.5. They had an agreement wherein if the PSC needed additional funding, Ramos would fund it from his discretionary funds as president. And so, this set-up was perfect because Juico requested for plenty of additional funding — which resulted in a total amount much bigger than the original five percent. Philippine sports was well-funded.

“During Erap’s term, this was stopped. Only 2.5 percent of the PAGCOR revenue was allocated — and nothing more. This continued under GMA’s term.

“Now, we are requesting Pres. Noynoy for the full five percent. Right now, our annual budget is around P700 million. Compared to tiny Singapore, with a population of just five million, their budget is (computed in pesos) a big P4.3 billion. That’s six times our figure. And so, if the five percent is granted, at least that will double our budget to P1.4 billion.