Two boxing fights were aired simultaneously last Sunday. On SkyCable’s channels 12 and 33 were Amir Khan vs. Marcos Maidana and George St-Pierre against Josh Koscheck. The unanimous winner? Freddie Roach. He was in Khan’s corner in Las Vegas, Nevada; he was in St-Pierre’s mind in Montreal, Canada. 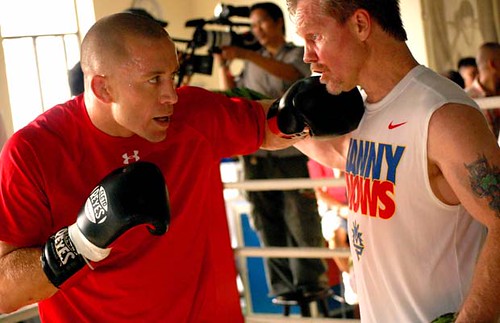 It was a boxing lover’s Super Sunday. For with the No.1 pound-for-pound fighter in Mixed Martial Arts, he engaged not in MMA—but in boxing. He mimicked another P4P numero uno. GSP was MP. The two are friends. The two admire each other. The two are pupils of Coach Roach. The two are the very, very, very, very, very, very best. How many verys was that? It doesn’t matter because Manny and George are the quickest, most athletic—and very best—fighters of this era.

GSP, thanks to Roach, jabbed and punched his way to bleeding the eye of Koscheck. That’s called boxing. And, in the many times that I’ve followed UFC, I’ve never seen mixed-martial artists spend so much time on four legs. UFC is often about takedowns. Sure, they spring roundhouse kicks and throw uppercuts, but, most often, these bouts involve floor exercises called grappling and wrestling. Not GSP. Not last two days ago.

George St-Pierre and Manny Pacquiao? They are so alike that, starting today, I call them this: beauty parlor beauticians. Their job: they perform facial treatments.

With Antonio Margarito, he had to undergo surgery on his fractured orbital bone. His right eye was shut closed by Manny. With Josh Coscheck, it was the same: his orbital bone was broken. Which side? Of course, GSP pounded on the same side as MP—the right eye. Nagsabot si Manny and George. 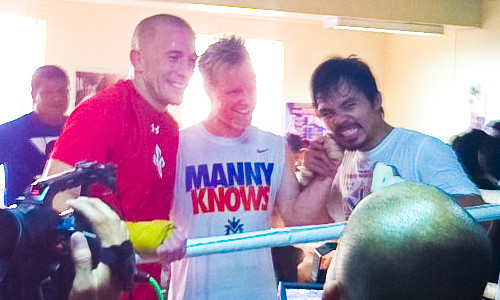 As to the sport of MMA, it’s gaining immense popularity. If this were business-talk, it’s eating “market share” from boxing. For, in boxing, what would the sport be like today without Pacman? In three words: Not as popular. Remember the days of Sugar Ray Leonard, Duran and Hearns? Or of Mike Tyson? Muhammad Ali? Frazier, Holmes, Foreman? Boxing was glorified then—especially the heavyweights. Today, minus Pacquiao, the sport would be sluggish and stale.

Mixed Martial Arts? “MMA is boxing…plus more,” wrote Lee Andrew Henderson in “MMA vs Boxing,” a May 18, 2007 Yahoo! Article. “MMA took the great sport of boxing and added amateur wrestling, ninjitsu and kickboxing. Many people refer to boxing as ‘the sweet science’ because of the strategy needed in boxing. Well the MMA multiples the amount of science. Boxers have to know from match to match what type of boxer their opponent is. There are different types of boxers with different strengths and different weaknesses of course but there are even more challenges for an MMA fighter. Just like a boxer, an MMA fighter might be facing a guy with great stand up who can box. This fighter might be light on his feet or he might be a slugger; he might have a great chin or he might have a glass chin. But in addition to that he has to know, how is his takedown? Can he defend the takedown? Can he submit me? What kind of ninjitsu does he know? How are his kicks? Everything that is great about boxing is multiplied by MMA.”

Two more points I’d like to add. One, UFC appeals to the young. Maybe because of the added brutality and blood. Maybe because of the louder music and more in-your-face TV commentary. Maybe it’s the unusual shape of the octagon versus the square of boxing. UFC crowds are younger—and they wear less Armani suits. AFFLICTION! their shirts scream. Two, the undercards are better. In world title boxing fights today, do we even care about the undercards? For sure, Bob Arum doesn’t. There’s only one Main Event and all eyes are on those two gladiators. In UFC, no. Thiago Alves was superb. The 6-foot-11 Stefan Struve against 6-foot-7 Sean McCorkle—that was towering.

Finally, why do I say that MMA is more followed? Click on the Sports Illustrated website, SI.com. Scroll through the menu found at the top. What do you see? Two sports lumped together. But guess which one comes first? MMA & Boxing.