The odds of winning P650,000,000 in last night’s 6/55 Grand Lotto are one in 29 million. If that sounds near-impossible, consider this: The odds of a Manny Pacquiao living in our midst is one in 6.77 billion. That’s because, of our planet’s entire population, there is only one Manny Pacquiao. There is only one human being—a Pinoy—who is the universe’s “Pound-for-Pound No.1.” This means that—as far-fetched as it sounds—you are more likely to win the 6/55 Grand Lotto than to produce the next Manny Pacquiao. Our Pambansang Kamao is the rarest of finds in our Milky Way Galaxy.

Speaking of money, did you hear that the No.1 individual taxpayer in our nation today is not Lucio Tan. He’s not a Zobel or an Aboitiz or another Manny (Pangilinan) who heads Smart and Meralco and PLDT. He’s the former construction boy from General Santos City who is today’s Congressman from Sarangani. Last April and for the year 2008, Manny Pacquiao paid a whopping P125 million in taxes. He was the BIR’s No.1 pound-for-pound individual taxpayer, handily beating Willie Revillame (P58.6M), Piolo Pascual (P55.8M) and even San Miguel Corporation’s Danding Cojuangco, who contributed a measly P18.98 million. 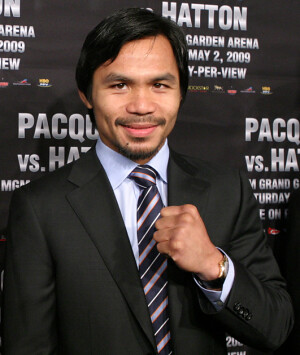 Of course, Manny doesn’t take home all this money. I’m sure he pays a heavyweight-size tax amount to the IRS of America. The same in our country that’s newly-called (from the previous “RP”)… “PHL.” He pays Freddie Roach possibly a million bucks. There’s Top Rank’s Bob Arum’s share. There’s Alex Ariza, Buboy Fernandez, Atty. Jing Jacal, his two dozen staff who include boys who open the door for him and who wash his laundry. There’s the chartered airplane ride from L.A. to Dallas and back, the congressmen he’s invited to cheer for their classmate and, of course, his lucky charm, Chavit Singson—whose body sticks to Manny like a magnet when the HBO cameras are on. These are expenses. These are expensive.

And so, to be conservative, let’s assume MP takes home half. That’s still $10 million. Though no longer exceeding the lotto prize, that’s still nearly half-a-billion pesos. Is Manny Pacquiao our first Filipino billionaire sportsman? Absolutely. He’s passed that borderline some time ago. How about multi-billionaire? That sounds better.

Consider these numbers compiled by Abac Cordero of The Philippine Star. In his article last November 26 entitled “Pacman’s take: At least $20M – Arum,” here are some figures…

Imagine if Floyd “Money” Mayweather, Jr. agrees to the mid-2011 Fight Of The New Century? Manny’s money can climb to P3 billion. With all that cash, who needs the 6/55?