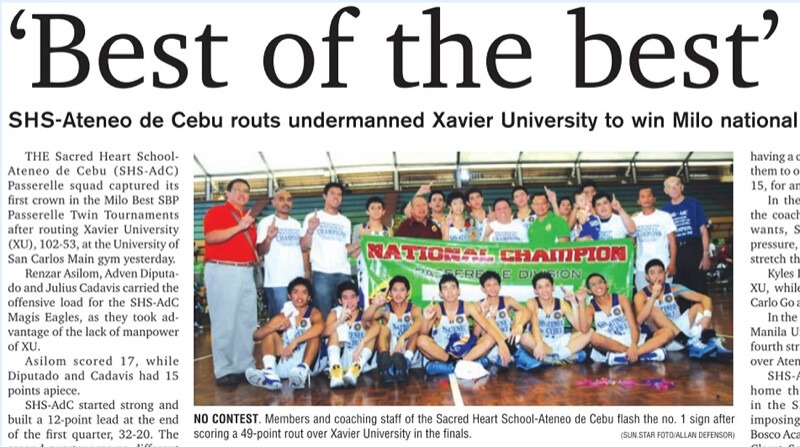 “SBP and Passerelle. Have you heard of these words before?” asked Rico Navarro, one of the top organizers of this event, last week in his popular sports column at The Freeman. “SBP stands for Small Basketeers Philippines while the term Passerelle is used for an age group of young teen-agers. Where are these terms used? In a more commonly known basketball tournament called Milo BEST…

“Milo is the chocolate energy drink that we’ve grown up with while BEST stands for the Basketball Efficiency Scientific Training Center. Although these are two distinct entities, Milo and BEST have had one of the longest-running partnerships in organizing two major activities: basketball clinics and an age group tournament with a nationwide reach.”

How long has the Milo BEST tournament been going on? Since 1985–or for 25 years now. That’s a long time.

“What do the UAAP Finals Jrs. MVP, NCAA MVP, UAAP Most Improved Player, the PBA MVP and the NCAA Juniors Coach of the Year have in common?” Mr. Navarro further asked in another story. “Kiefer Ravena, Baser Amer, Emman Monfort, James Yap and Britt Reroma.”

Rico is right. Is there a better youth basketball program than Milo’s BEST? None. Is there any other Philippine company today that invests more millions in grassroots sports than Nestle and Milo? None.

Last Sunday morning, I visited the USC Main gym. It was hot. Hotter than Cebu Coliseum. Did the hostilities contribute to the heated atmosphere inside the gym? Absolutely. Sacred Heart School-Ateneo de Cebu represented the Visayas. The opponents came from Manila: the Xavier School of San Juan. It was an all-Jesuit battle. Even former president Joseph Estrada was inside the gym the whole of Saturday. His son — wearing No. 8 with the all-caps “EJERCITO” — played for Xavier. But what a lopsided game last Sunday for the championship–in favor of Cebu. The score: 102-53.

The green-colored USC gym was painted blue. A couple of hundred Ateneo spectators — parents, schoolmates, friends — cheered for their blue team. Xavier School — color gold — was no match in the gold-medal game of the Passerelle division.
Last weekend, when eight schools representing four regions battled inside the USC gym, was the start of the Milo BEST. It was the finale, the national finals. 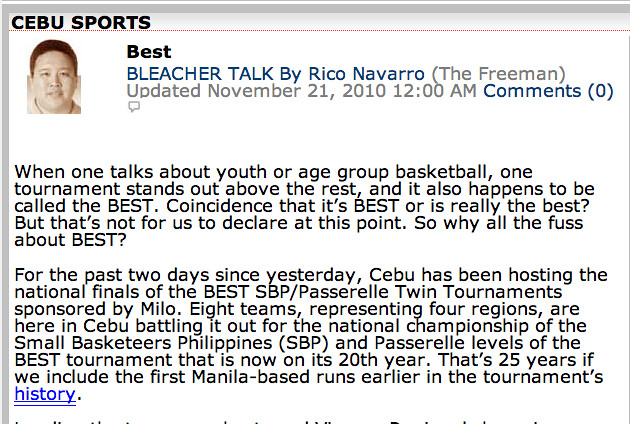 “One of the most interesting developments of the Milo-backed BEST tournament has been how it has become an annual must-have activity for schools with basketball programs across the country. More importantly, it has now become the necessary steps of development for today’s basketball players. Most of today’s collegiate players trace their roots to having played in the SBP Passerelle tournaments when they were younger.

“It has become a tradition for many schools to launch their programs with SBP activities composed of clinics and tournaments. Nine to ten-year-old kids start to play more for fun, then eventually get more serious once they turn 11 to 12 years old. As they get to be really better from a technical and skills level, the competition also gets tougher along the way into the Passerelle division which features players between 12 to 15 years old.”

Back to the USC gym last Sunday: Seated beside me was Nestle assistant VP Pat Goc-ong. He beamed with pride. A former national weightlifting champion (who was USJ-R’s varsity star in college), Pat oversees all of Nestle’s sports programs. Seated together with Brando of the Cebu City Sports Center, we talked of Milo sports — their marathons, summer clinics, BEST programs. The conclusion: no company is better than the best. Go ask Ovaltine.