Minutes after I sent him a text message, my mobile phone rang.

The founder and president of one of the largest educational institutions in the Philippines was on his way to his office at 3:45 yesterday afternoon.

“The players are waiting for me,” he said.

The Players, of course, are The Champions. For the first time in the 10-year history of the Cebu Schools Athletic Foundation, Inc. (Cesafi), a school other than the University of the Visayas (UV) has emerged as titleholders.

“Yes, we’ve been trying to win all these years,” said Atty. Go, “but we always could not win in basketball. Finally, we made it.”

The UC Webmasters made history last Tuesday evening, winning the best-of-five championship series, 3-1, when they scored a breathtaking 73-72 victory—thanks to 6-foot-10 Junemar Fajardo’s tough jumper with only 4.0 seconds left.

Atty. Augusto Go wanted to be there in person at the facility he owns—the Cebu Coliseum—to cheer on his team. “It was the birthday of Governor Gwen Garcia and I attended her party. My daughter, Candice, watched the game. She was the one who told me the good news.” 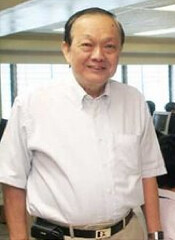 “What makes this victory extra special is because earlier that day, I got news that we got both first and second place in the Naval Architectural national examinations,” he said. “And then, this, the win by one point. It has given me even more excitement.”

The term that Augusto Go coined? “Triple treat! It was a triple treat!”

I reminded Atty. Go that it wasn’t just a one-two-three victory. It was also his birthday last Monday and what a way to celebrate. Yes, he agreed, laughing.

I asked him more about himself—and basketball. Were you formerly a player? “No, I used to play bowling,” he said. “But I watch and follow the NBA and am a big fan of the L.A. Lakers. Although now, with LeBron’s entry to his new team, I’ll be following the Miami Heat.”

Finally, we talked about the twin victories that have never been done before. First, the supremacy of Cebu Eastern College and, two nights after, the triumph of his University of Cebu.

“Mr. Frederick Ong, Jr. won the high school division with CEC while you won the college,” I said.

“Yes, you’re right. And that makes it extra special!” he replied.

As to incentives or gifts he’ll give Junemar Fajardo—the unstoppable giant on the low-post who scored 32 points and the Cesafi season MVP—plus the rest of the Webmasters, he said, “Atty. Estenzo will decide on that. He’ll tell me his recommendation.”

We said goodbye. I, pondering on this extraordinary week; Atty. Go off to meet his players—the champions of Cebu.