Nobody possesses more self-confidence than our modern day version of Jose Rizal. Like the hit 1982 videogame by Atari that gobbles up wafers, Pacman is a hit—and he gobbles up opponents as if munching on Mexican burritos. Plenty of Mexicans he has gobbled: Velasquez, Solis, Morales, Barrera, Marquez, Larios and, yes, on the morning of the 14th of Nov., another enchilada named Antonio.

We have so much belief in Manny Pacquiao winning that odds-makers tag him a “minus-525” favorite. This means that a $525 bet on MP will earn you only $100. That’s a staggering number—considering these numbers: Pacman stands 5’ 6” while the Tijuana Tornada is nearly 6-feet-tall. Well, that lopsided betting figure is justified because, in his last 12 fights, Manny has won one dozen. The world of boxing has grown to expect Manny NEVER TO LOSE. To us, he’s not Superman—he’s up, up, and away….. 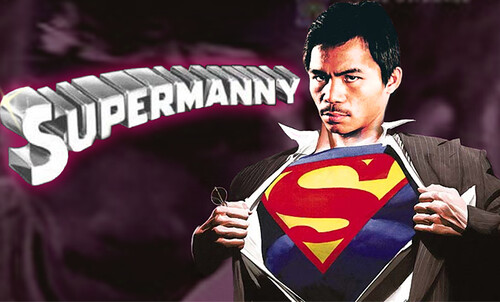 Still, I’m anxious. So, I’m sure, are you. With all these media reports that have bombarded us the past 14 days, it’s hard not to feel nervous. “MANNY SKIPS MORNING RUN BECAUSE OF BASKETBALL,” reads one headline. “FOOT INJURY!” screams another. “PACQUIAO BETTER STEP UP,” announces Bob Arum, fully aware of the marvelous shape of his other ward, Margarito.

What’s worse, instead of being imprisoned in his Baguio prison camp, the laagan that he is, Manny often escapes The City of Pines to head down to The City of Entertainment. Almost every Saturday night, he’s in Metro Manila.

For this is who Manny is: He likes games. He loves playing games. He relishes teasing us. While we’re troubled with his training, he’s training, all right—practicing the guitar and doing voice lessons to prepare for his after-fight concert in Dallas, Texas. Pacquiao is forever a risk-taker. A man on the edge.

What I’m most concerned of are two-fold. First, I haven’t heard much from Freddie Roach. Usually, a month or so prior to The Fight, this planet’s most celebrated trainer boasts, “Manny will knock him out in 7!” And, true enough, Freddie is Nostradamus—he’s correct. Sadly, he’s silent this time. Sure, Freddie said, Manny will toy with Antonio. But wasn’t that years ago? I mean, two months back? Before he saw the fitness level of his prized treasure? Before he realized that, “Hey, Manny’s taking it TOO EASY this time, he’s too overconfident, he’s not in perfect shape with just three-plus weeks to go.” And so first, I’d like to hear from Freddie. I’d like for him to reassure us. Thus far, we haven’t heard much. This isn’t good.

Two: the distractions. I know, I know. Manny, while called Mr. Destruction, is also Mr. Distraction. Most superstars love distractions—it’s how the Kobe Bryants and Lady Gagas and Pacquiaos orbit Earth. But, don’t you think this time, Manny has one too many? No, I’m not talking about Krista Ranillo and filming TV sitcoms and the alleged gambling midnight sessions of the past.

I’m talking about sessions in the House of Representatives. Months before his hardcore training started, Manny focused not on his physical body but on his mental capacity. He studied RP’s laws, lobbied for Sarangani’s 500,000 constituents, campaigned for Villar then shuffled footwork to align with Aquino—he’s now one of our 278 congressman. 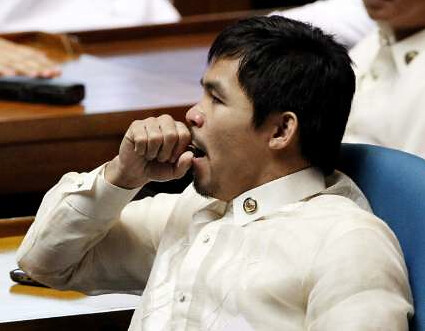 Isn’t this good? CongressManny? It may be bad. For boxing. For us. It may have taken away that “edge.” Surely, it has dragged Rep. Pacquiao inside the political arena for hours and weeks and lessened his time inside the boxing arena. Don’t you think, while training, his mind often wanders to his obligations? Political?

Manny is Manny. Many are unlike Manny. He can juggle 149 thoughts per millisecond. He can strum a guitar, negotiate a P222 million deal for MP Building No. 5 in Gen. Santos City, kiss his children, shoot a left-handed 3-point shot, high-five Mark Wahlberg, meet Pres. Noynoy anytime he wishes—all within an hour.

But can he win 26 days from now? Abangan.