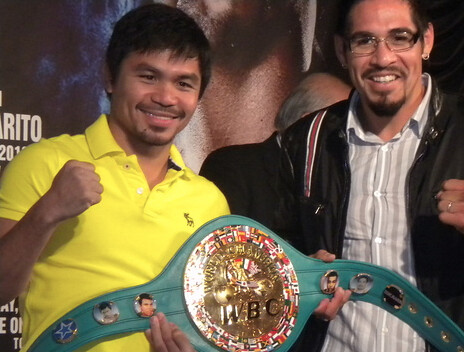 YouTube is one of mankind’s greatest inventions. According to Wikipedia: “In May 2010, it was reported that YouTube was serving more than two billion videos a day…”

One of those two billion videos I watched at 6 p.m. yesterday. It was a 13:23-minute clip and three men—Bob Arum, Antonio Margarito and Manny Pacquiao—spoke during the press conference two days ago in Los Angeles. What did I see?

Bob Arum, today’s Don King minus the standing hair, spoke first. He talked of injustice. He articulated how Mr. Margarito was denied justice in Las Vegas, disallowing him to fight in the “Sin City.”

Antonio Margarito stood up next. Donning a shiny black leather jacket and wearing eyeglasses that made him look like a UCLA student with spiky hair, “Tijuana’s Tornado” spoke in his native Mexican language.

Then, Bob Arum came back on stage to introduce the beloved superstar. Said Arum: “He’s now the Congressman from Sarangani… to the best of my knowledge, he’s the first professional boxer, while he is pursuing his boxing career, to be a representative of the highest parliamentary body in his country… that is a real tremendous achievement.. and he’s just starting because… in 2016, he’s going to be Vice-President and, hopefully, while I’m still around, we’re going to the Presidential Inaugural!”

Rep. Emmanuel Pacquiao spoke. His English, despite his hurried training in the halls of the Batasang Pambansa, sounded crooked. But never mind. Because when Manny talks, his facial expression does the talking. He smiled.

For doesn’t Manny love to smile? And, when he does, don’t we return the favor and smile, watching our greatest-ever athlete enjoy himself on center-stage?

For that’s the originality of Pacman. While the Tysons, the Mayweathers, the Hattons wear the ugliest of frowns during press gatherings—as if there was a “Who Can Frown Best Wins” contest—with our fighter, it’s the opposite.

Manny grins. His face is no boxer’s pugilist face that will scare your 5-year-old boy. He’s the most relaxed, casual and laid-back man in this sport that demands fighters not to be relaxed, not to be casual and never to be laid-back.

Boxing is tough. It’s the most brutal and merciless of games. Blood gushing off one’s nostrils is a guarantee. So are swollen knuckles and broken ribs. Yet Manny makes it all look so easy. Effortless. As if earning $10 million on 30 minutes on the boxing ring were no sweat. (In his actual eight-week-long training camp, however, we know the reality: many would get killed following his work ethic and bruising regimen.)

With the press-conference, it was a feel-good story. Again, so unlike-boxing. Even Margarito, seated to Manny’s left while our boxer spoke, was seen amused and smiling as his enemy spoke.

And you want to hear the best part? To greet the Mexican crowd—plus Margarito, our fellow Pinoy spoke Mexican. No kidding. Though I couldn’t decipher what he said, it was amazing to hear Manny recite several words in his opponent’s native tongue.

Manny praised Antonio. He called his challenger’s fighting style “very aggressive.” He said he’s “strong and bigger than me.”

Was this a beauty pageant? A Mr. Universe contest to see who’s the kindest on-stage? No. It was Manny as Manny. That’s who he is.

Finally, the two stood up, holding the golden belt, and faced the cameras. It was a marvelous sight watching a 160-plus-pound behemoth of a man who stands an inch short of 6-foot-tall beside a baby-faced Asian who used to fight 105 lbs. But, as we know from one of the bible’s most famous clashes, the smaller yet more cunning fighter catapulted his weapon to obliterate the giant. Let’s hope for the same on Nov. 13.