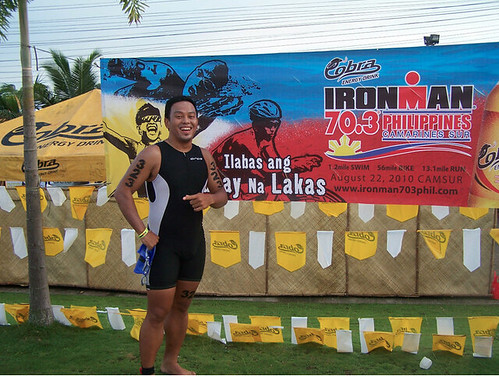 Last year, after featuring Noy Jopson (the top Filipino in the 2009 Ironman in Camsur) and, the past month, writing about Annie Neric (Cebu’s lone “Ironman woman”) and Dr. Raymund Reel Bontol, now it’s another top triathlete.

Eugene Sanchez, 37, is not your neophyte swim-bike-run athlete. He started 14 years ago when, he said, “Noy Jopson organized one in Plantation Bay… I only had one month of training and barely finished… but fell in love with the sport.” 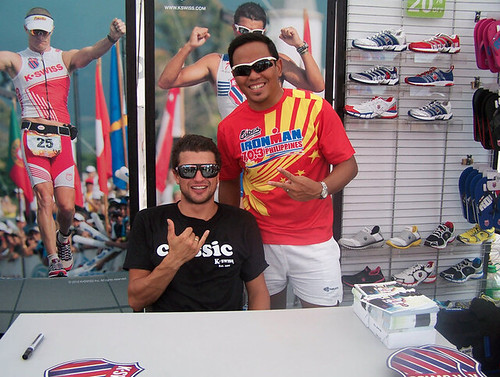 “Last August 22, I raced the 2nd edition of the Philippine Ironman at Camarines Sur, finishing 90th over 497 athletes and 23rd in my age group. It took me six months of training to prepare myself for this very challenging distance.

“The road to doing the half IM distance again proved challenging. Sacrifices had to be made; Willpower, strengthened; Muscles, hardened. The sport of triathlon is never easy. For if it was, then it would be as popular as the running boom in Cebu. Some can swim, others can bike and plenty can run but only a few can swim, bike and run. Still, triathlon can be for everyone and anyone regardless of age – as long as you are willing to sacrifice… a lot.

“Sunday becomes a 100-K bike ride with a 10K run at noon. Noon breaks on weekdays are reserved for long swims. No more Friday night-outs for me, had to wake up at 5 a.m. on Saturdays for my two-hour run, then a cool-off swim. I even missed my high school reunion because I had to wake up early that Sunday morning for my long bike ride, alone. Yes I did a lot of sacrifices but I never regretted it. In fact, it was the best decision I made on my birthday – registering for the Philippine Ironman. I could not fail… I will finish what I started and will push my body until I will cross the finish line. 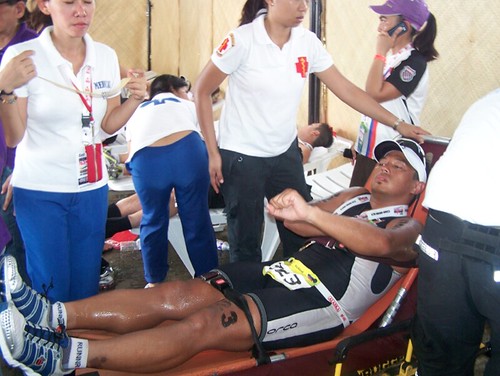 “Now to the race: The swim start was difficult with hundreds of athletes trying to get their own space. Just imagine being thrown in a washing machine–that’s how I felt for the first 200 meters. As always, I start my swim with a prayer; this helps calm my nerves and eventually catch my long stroke and rhythm. The two-km. swim took me 36:54 minutes – happy to be done with the part I dread most.

“The bike was an easy part for me, having numerous road races under my belt. The course was relatively flat which took me 2 hours and 26 minutes for the entire 90 kilometers. I was still okay but my mind was already on the next leg, the run, which I am not so gifted at. Having a heavy framed body, the run part is somewhat difficult unless I lose 30 pounds! Before, I could do a 20-minute 5K run in a triathlon–but that was when I was 30 pounds lighter. Carrying a lot of blob surely slows you down…thanks to Mang Inasal! 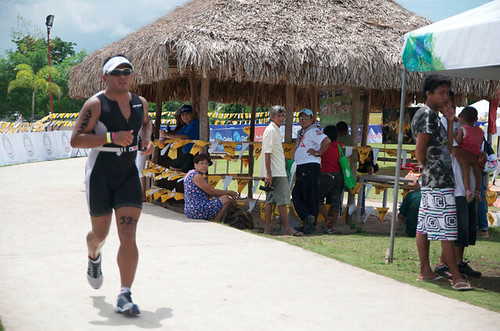 “Then the run starts. It’s not easy to run a 21K, all the more when you start after a 2K swim and 90K bike. With energy reserves half empty and the sun almost at its peak, it’s tough. But run I did. I promised God that I will run the whole 21K for Him, without walking, and so I did except a little near the finish line. My quads, gluteus and every leg and back muscle were cramping at the last 1K mark. In the end, the finish line attracted me like a magnet or a moth to a light. Even when I was in extreme pain, it gave me that extra boost to cross the line. And I did in a time of 5:31:57–the 3rd Cebuano to cross the line at the Ironman Philippines. 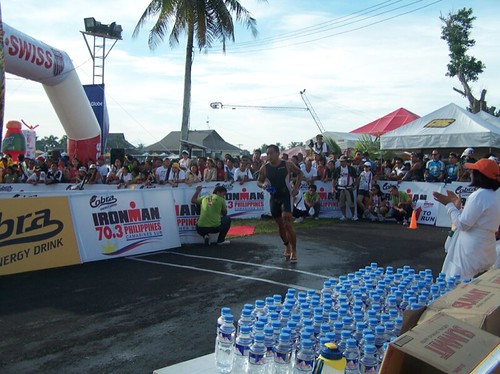 “Now I can have my subzero beer and do a little partying. But it won’t be long, the 3rd edition of the Philippine Ironman is just a year away. So I will soon be back to what I love most: swim, bike and run. See you at the starting line!” 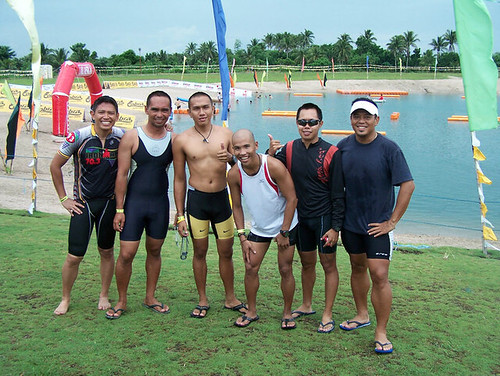