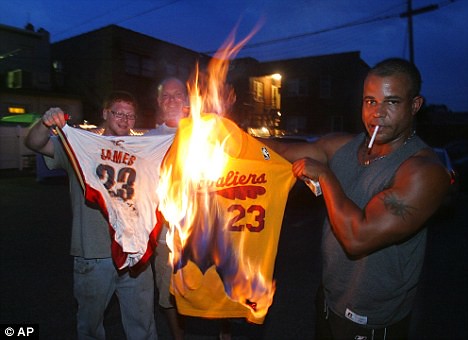 LEBRON JAMES IS A CRIMINAL! Accused as a quitter by Cavs owner Dan Gilbert, lambasted by Orlando’s Otis Smith as not much of a competitor, the five cities of New York, Los Angeles, Chicago, New Jersey and Cleveland who lost out to Miami are furious. They’re bitter. They’re hateful for being spurned. They’re pissed at ESPN. To the millions from Cleveland, while before LeBron was basketball’s Almighty, now he’s the devil. He’s a Miami vice.

But LeBron did the right thing. If you and I were in his size-15 shoes, we’d do the same act: Sign up with best friends Chris and Dwyane to win next year’s NBA title. He had no choice. Despite winning the last two MVP awards, reaching The Finals in 2007, his Cavs owning the league’s best season record for the past 24 months—despite those winnings—LBJ was a loser.

Kobe wears five NBA rings. LeBron, staring at his giant-sized fingers that can grip the ball like a magnet, has none. LeBron’s jealous of KB. His seven years of expeditions have netted zero fish. What’s he going to do? Stay on the same boat? Not harvest any goldfish?

No more, no way. Not when you’re as impatient as LeBron who, at age 18, bypassed college and joined the NBA straight from high school. When you’re as gifted as him, you’re expected to deliver gifts codenamed NBA TROPHIES. “Change a losing game,” my dad loves to say it. And LeBron has done that: Change.

Miami? No city is hotter today than this South Florida center of 5.4 million residents. And what a coup by Pat Riley. The man called “Mr. GQ” for his gelled-back hair and stylish suits, he’s assembled this triumvirate of LeBron plus the 6-foot-10, five-time NBA All Star named Chris Bosh, plus the 2006 Sportsman of the Year, Dwyane Wade, aka “Flash”—beating the likes of Pres. Barack Obama (who lobbied for Chicago) and Mayor Michael Bloomberg (New York). As to the Miami head coach, it looks to be Erik Spoelstra but can you imagine if Pat Riley makes a comeback to coach these three who, as D-Wade himself said, form “arguably the best trio to ever play basketball?” 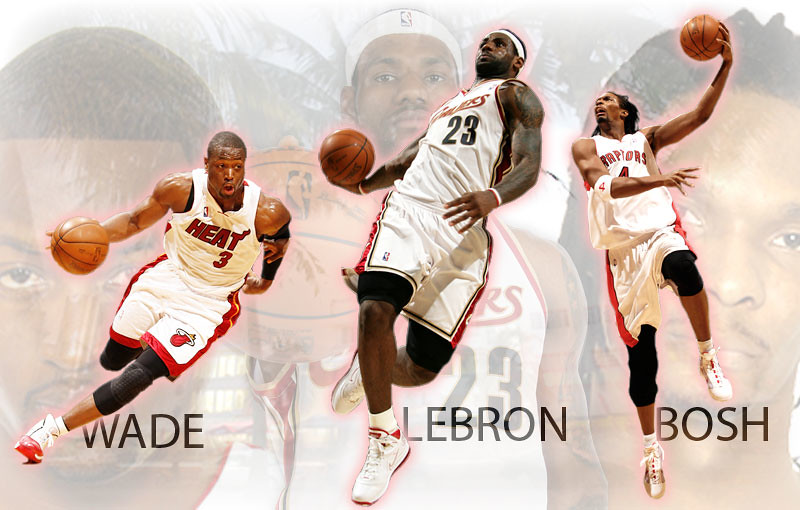 The question everyone’s asking is: Can this threesome work as one? “James, Wade and Bosh got along splendidly when they played for the U.S. team in the 2008 Olympics, but that was easy, because that is an environment in which selfishness is considered unpatriotic,” wrote Michael Ventre in “There has to be no ‘I’ in super team” for NBCSports.com. “Throughout his entire life, LeBron has been accustomed to getting the basketball when he wants it. Throughout HIS entire life, Wade has been used to the same thing. Ditto for Bosh. Now you have three players with enormous egos suddenly thrust into an unfamiliar dynamic.”

The best comparison is Boston’s Big Three. But Ventre adds they’re different: “The model of the Boston Celtics, with Kevin Garnett, Ray Allen and Paul Pierce, doesn’t translate here. Allen was 32 and Garnett 31 when they joined the Celtics in 2007, and each had toiled for 12 unsatisfying NBA seasons. When they moved to Boston to join the then-30-year-old Paul Pierce, who also had suffered through nine lean seasons, they were all finished with their respective individualistic phases. They were ready to work together and win.”

With The Three Kings of Miami, they are individual superstars at their prime who now have to share the same locker room. It can work. It may not. My gut feel? It’s hard for this not to work. I believe it will. First, my brother Charlie correctly points out that D-Wade is unselfish—which means that, even though he’s Miami’s VIP, he’s willing to relinquish—or at least share—this title with LBJ. The even better reason for this triad to work: they’re best friends. In Beijing, these triplets bonded. En route to netting the Olympic goldfish, they glued and gelled, and informally promised to join forces sometime in the future.

That future is now. And like you, I can’t wait for the NBA season to start. With this troika, it’s hard for anyone not to feel hot with triple the heat. 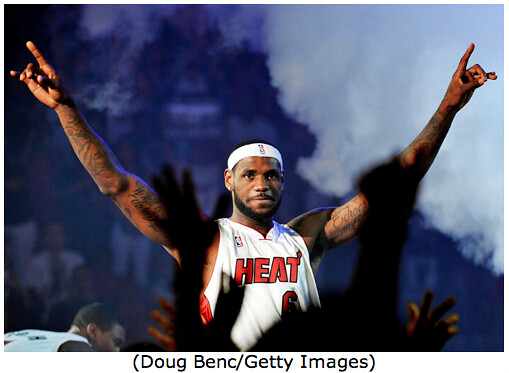