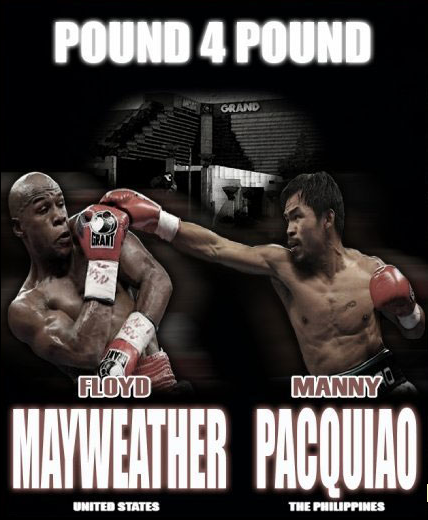 Let’s admit it. Floyd Mayweather, Jr. was outstanding. As much as 100 percent of us Filipinos hate his mouth and detest his ego, on the ring, he’s sensational. During those 180 seconds during Round 2, didn’t we all jump in excitement, shout, pray, and wish that Shane Mosley would finish him off? Yes we did. But, shock of shocks, Sugar turned old and stodgy one minute later in Round 3 while Floyd, usually a defensive expert, turned into an offensive generator. Mosley owned a small window of opportunity—which was promptly slammed close by Mayweather.

Stamina? Well, what can you expect from a 38-year-old? Starting the fifth round, Shane’s face was empty. His tongue wagged. He was tired while Floyd, in between rounds, never looked fatigued. Floyd’s endurance can be likened to someone you and I share the same color skin with: Manny Pacquiao.

Which brings me to The Fight. Can you imagine Pacquiao vs. Mayweather? Two of the fastest athletes facing nobody else but each other’s speed inside the 18’ x 18’ stage. They’re swift, snappy and fire quadruple combinations in rapid-fire sequence. Ever seen Manny fatigued in Round 12? Same with Floyd, right?

“Forget world peace, the world needs Mayweather-Pacquiao,” one columnist, Mark Whicker, titled his story. True. This is a marriage that Americans and Asians want, that boxers and non-boxing fans salivate at watching; it’s a 36-minute encounter that would boost Money’s income by least $25 million and Manny’s by over one billion pesos.

Which is why it’s not going to happen. In the same way that some candidates, however qualified and best suited, will not win this Monday’s elections. That’s how the world operates. Life’s unfair. Not everything we wish, we get. And this is one wish we won’t get.

“Pride,” said the poet John Ruskin, “is at the bottom of all great mistakes.”

Pacquiao won’t agree because, he says, blood will sap him of energy when, in fact, it’s just a little needle and small volume that they’ll extract. Floyd’s asking for “14 days before the fight” for his blood test while Manny’s OK with 24. This means that only 10 days separate a “Yes” from a “No.” That’s pride.

Worse, Mayweather, without question the most boastful human being in this universe today, wants everybody to bend to everything that he wishes. He doesn’t think he’s Muhammad Ali; he believes he’s boxing’s God. That’s pride.

“This is not bragging or boasting,” said Mayweather in the press conference shortly after the fight (yeah right!), “but with or without Pacquiao, Floyd is going to be able to go out and make $20 million or $30 million a night. With or without him, I’m still able to do that.

So, what complicates matters now is not only blood-testing but money. After his victory 48 hours ago, do you think Mayweather will settle for a 50-50 share, like he originally did months ago? No way. Money wanting more money is what Money wants.

Back to our own Manny and the blood-testing issue, here’s what I would advise our man: Agree to 14 days. We know, Freddie Roach knows, and Buboy Fernandez is certain that Manny does no drugs. Then, what’s the scare? Pride? Well, this pride is expensive at P1,000,000,000. From now until November—the month when Bob Arum wants the fight—Manny can simulate this blood-testing procedure and know that it won’t debilitate or weaken his body.

Then he beats Mayweather! Because Floyd, for all his defensive prowess and ability to adjust, is beatable by Man. For Floyd doesn’t possess Manny’s power. Quickness, yes, they two are the same, but power, I’d tip the favor to Manny.

So, there. The enemies: Cash, blood, pride.