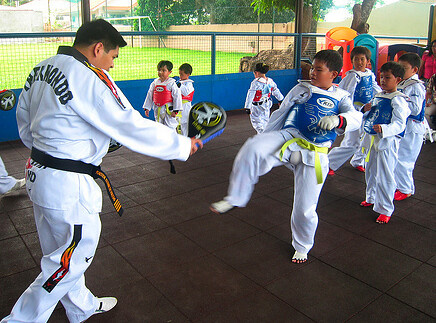 Ask any Korean you’ll meet at SM or Ayala to translate the word “Taekwondo,” and this is what he’ll say: “Tae” means to destroy with the foot; “Kwon” is to strike or smash with the hand; and “Do” means art, or way of life. Thus, the full translation reads: “the way of the foot and the fist.”

Taekwondo is one of the most popular martial arts in the world. But why learn the sport? I posed this question to one man. He’s the Team Cebu City taekwondo director. He’s the regional chairperson of the Philippine Taekwondo Association. He’s Tony del Prado.

“Taekwondo is both a sport and a martial arts,” said Tony. “You get to exercise and at the same time know how to defend yourself. The sport was on the upswing after it was admitted into the 1992 Barcelona Olympics as a demonstration sport. It’s also among the safest martial arts. The protective gears from head to foot are impressive. The way the taekwondo jins deliver the kicks are amazing. A demo presentation, even if done by our locals, never ceases to electrify the crowd.”

Tony’s first exposure to the sport was during his college days at the Ateneo. Then, he marveled at his taekwondo-kicking dorm-mates who were fit and disciplined. “In 1994 when my son Anton was five years old,” added Tony, “I brought him to Baseline Center and enrolled him. There was a bully in school and I thought that he should know how to protect himself. Early on I wanted him to fight his own battles.” 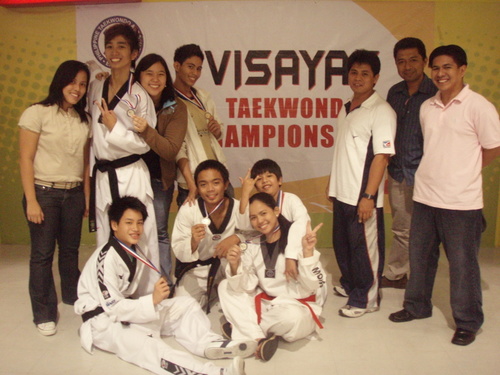 True. Isn’t this why many enroll in martial arts? For self-defense?

But taekwondo is much more than just defense. It’s now one of the more popular Olympic events. And it’s a sport where the Philippines—never a gold medal winner—has a crack at gold.

“We have a good chance in the Olympics,” said Tony. “The national pool is training in Korea to prepare for the Olympic qualifying. Our athletes are world class and this was proven during the Asian Games. Although the Koreans are still the best, we have a big chance since countries are only allowed to send a maximum of 4 players for the 8 Olympic categories. This means that Koreans can only compete in 4 of the 8 categories. This also holds true for strong teams like Iran, China and Spain.”

Future plans? “We have focused on equipping the instructors and officials. Fair competition was at the top of my list. By doing this we were able to elevate professionalism among practitioners in our region. The instructors’ course we conducted two years ago had a significant impact on our growth. It opened their eyes to the modern way of teaching. It was a paradigm shift for most.

“For instance, in children nine years old and below, teaching is mostly done in a ‘play and learn situation’ because you cannot be militaristic towards kids. The reforms resulted in the sport’s unprecedented growth this year. People who quit or were inactive are coming back and training to be instructors.” 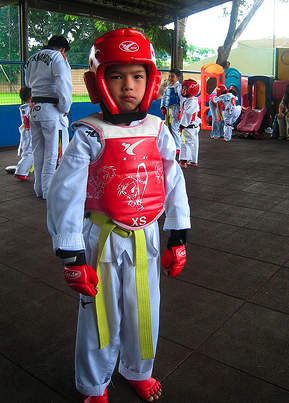 Matt Michael, 7, with his yellow belt

Why the taekwondo success?

“Not being a taekwondo practitioner, I initially had difficulty when I assumed the chairmanship position. Although a disadvantage, I made it work for me since I have no club or chapter and therefore have no vested interest. I don’t know of any other region that has a non-taekwondo guy as its chairman.

“I wouldn’t be successful if not for my management committee members: Kenneth Toledo of Bright Academy, Avenger Alob of SHS-Jesuit, William Ylanan and the senior blackbelts like Larry Elpa, Danny Yap and Rene Brojan.” 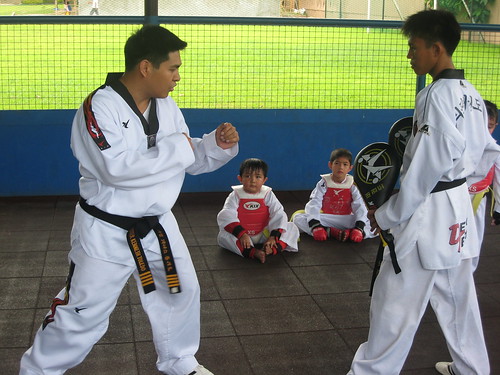 Kenneth Toledo (left), the regional chief of referees in Cebu

As individual a sport as taekwondo is, it’s rare to have a leader like Tony del Prado who credits not himself—but his team. 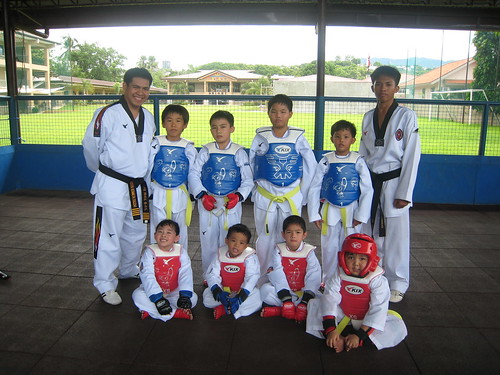 Future Olympic gold medalists? Why not!