One of my favorite parties each year is the All-Cebu Sports Awards. For where can you gather, under one restaurant roof, sitting side-by-side, mingling, posing for photos, swapping autographs, beaming with earful grins, exchanging stories, laughing, parents crying of joy, world boxing champions in sight, gymnasts and footballers talking, everybody proud, all standing on Cloud 10, the best athletes in Cebu?

It only happens once. Each year. At the All-Cebu Sports Awards.

Last Saturday night, it wasn’t the first All-Cebu Sports Awards. It’s wasn’t the second, 12th or 22nd. It was the 26th year when your very own sports scribes—the Sportswriters Association of Cebu (SAC)—honor the year’s top sports figures.

Let me say this: I am fortunate. Lucky. Honored. Not only was I bestowed the title of ‘President’ of the SAC for this year but, more important, I stood as emcee for the night. What did that mean? That meant that when I stood on that podium for the entire evening, I had an unparalleled vantage point of all of Cebu’s winners…… 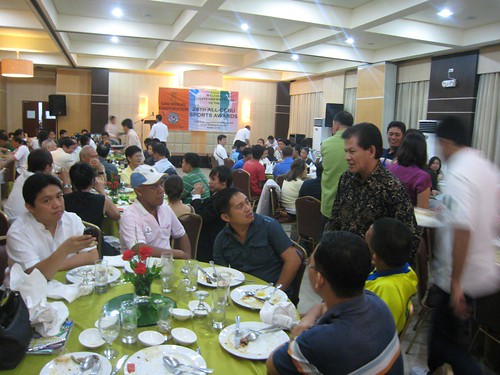 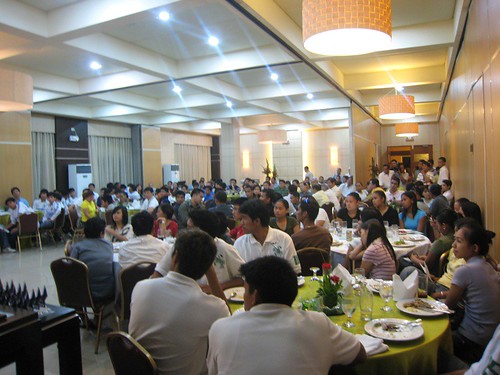 To my left sat giants. They wore XXXL-size jackets, 14-size Nike shoes, and they gorged on the Laguna Garden Cafe buffet like starved men. The 7-time CESAFI champions, undefeated since the annual collegiate games started, sat on a round table. Led by coaches Boy Cabahug and Al Solis, they’re the University of the Visayas basketball team.

At the very back sat Niño Surban. On a pair of two wheels named the bicycle, nobody in Cebu is faster. Standing almost 6-feet-tall, Niño is Cebu’s Lance Armstrong. 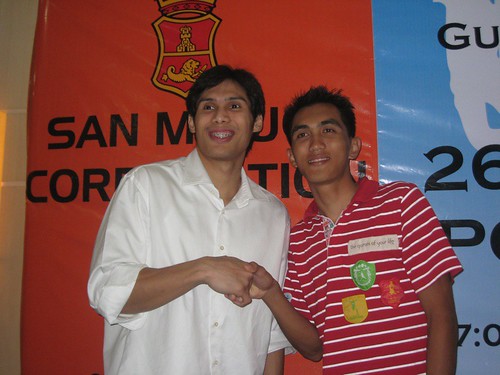 Down the center table sat Jess and Julie Lagman. Of all the sports parents in Cebu, I admire the Lagmans most. God-loving, sport-loving and children-loving, no wonder Julian, Julius, Jessica and Jacob (one of RP’s top juniors) are tops in tennis—thanks to their dad and mom. 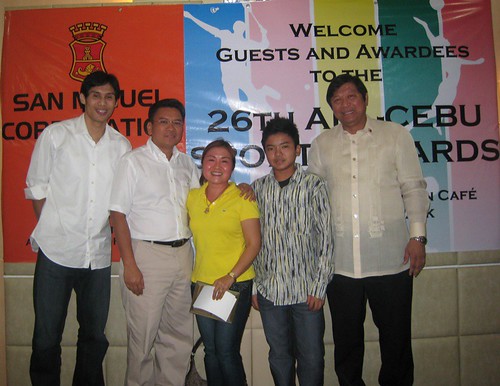 Wushu. Heard of wushu before? I have but never saw this type of martial arts until the duo of Stephanie and Evangeline Agbay performed. It was a fascinating five-minute show. And you could see their benefactors, Francis and Joy Onglatco, beaming with pride.

Without doubt the best-looking awardee was Niño Ramirez. The MVP at last year’s PRISAA National Championships (and the basketball star at USC), Niño wore a black coat-and-tie that complemented the formal wear of his equally good-looking parents, Jay and Lou Ramirez. 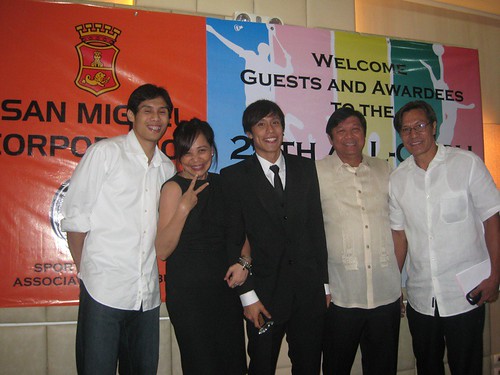 Don-Don with (from left) the Ramirezes: Marilou, Niño, PSC Chairman Butch and his brother Jay

Standing on the stage, to my right was a table loaded with superstars. Consider these names: Z. AJ. Boom-Boom. Donnie. Know them? Of course you do! Z Gorres. Michael Domingo. Rey Bautista. AJ Banal. Their trainer, Edito Villamor. With them were ALA Gym honchos Dennis Cañete and Chad Cañares. The top gun himself, Michael Aldeguer, attended despite that night being his wife Christine’s birthday. The looked terrific wearing black long-sleeves. But what made me happiest posing for a photo with their group? Because world champ Donnie “Ahas” Nietes didn’t bring his snake! 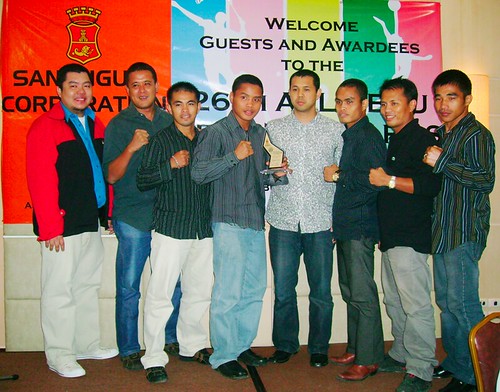 Who else joined the jam-packed crowd? Judo’s Vicente Fernandez III, the silver medalist of the Philippine Olympic Festival, was there. So was Vince Marc “Mac-Mac” Tabotabo (the multi-awarded tennis star), joined by his dad Titus and coach Dodong Ruelan.

The Siso family, who’ve been awardees almost each year, were in attendance: mom Sally and children Niño, Sally Dine, and Sally Mae (who’ll be leaving for Jakarta, Indonesia this Friday for the Asian Championships). 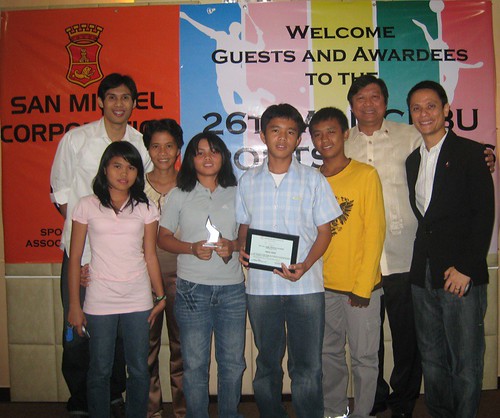 Dancing. No, the night wasn’t all eating or trophy-giving; twice, the Dancesport Team Cebu City—represented by Christy Kim Velez and Inoue Roi Rendon—boogied, swayed their hips, and did the “split” on the shiny floor. When they finished, I noticed a man, seated just inches away, whose eyes grew wider, mesmerized.

“Boom-Boom,” I announced, “we all know is a very focused man. But I’ve never seen him this focused… staring at the sexy dancer, Christy Kim Velez!”

The crowd roared while Boom-Boom, never one to shy away inside the ring, smiled, turned red and blushed.