Football is popular in Cebu. This I learned the past 36 hours. When I entered the Cebu City Sports Center last Friday night, hundreds of pairs of spiked shoes and knee-high socks greeted my eyes. Yesterday morning, it was the same soccer-frenzy sight: girls kicking, boys sprinting towards the steel goal, coaches shouting, goalies jumping to stop a score… 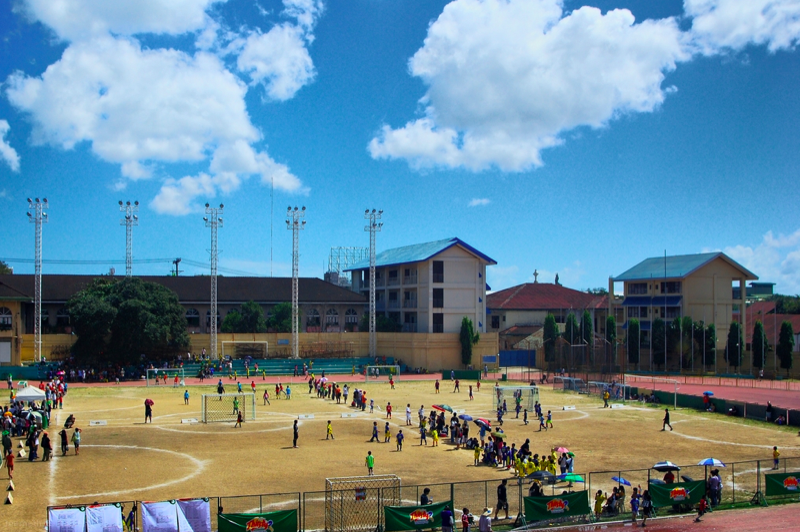 The world’s No.1 sport is widespread and celebrated in the Philippines’ No.1 city. Take the 7th Thirsty Football Festival, a smorgasbord of 209 teams and 2,500 participants. All of them Cebuanos? No. Plenty arrived on our shores coming from Tubigon, Dumaguete, Tanjay, San Carlos, Iligan, Tacloban and Bacolod. Outside Manila, this event is possibly the largest gathering of footballers. My observations from the Thirsty Cup?

Football and music mix well. Who says you can’t play Boom-Boom Pow while the game is on? At the Thirsty event, hip-hop tunes scream loud from the loudspeakers. And what a fabulous idea. For today’s children are lovers of music; when their favorite songs are heard reverberating throughout the complex, it invigorates the players.

Football is best in the dark. Night games? Sure, why not. Thanks to the gleaming lights inside the Abellana grounds, darkness was transformed into daylight the past two evenings. Last Friday, the games extended until….. 11:30 p.m.

Too late for sports? Nah. As Steve Jobs proclaimed… “Think Different.” I say night games (possibly of any sport) is a superb plan. Minus the intense heat of the 12:30 p.m. sun, playing below the stars  means quicker running without squinting one’s eyes. This idea, I believe, was started in Cebu by the Thirsty event organizers: my brother Charlie, top organizer Neil Montesclaros, and the current president of the Don Bosco Alumni Football Club, Chad Songalia.

Quick Football. The concept of the “Football Festival” is unlike the World Cup games, for example, where 90 minutes are allotted per game. With this “festival,” it’s a brisk and spirited 15 minutes. After a short 7.5 minutes, the two squads change sides. This means that every second matters.

Bad? Well, yes, there’s nothing like the full game. Good? Well, yes, because more games are multiplied and everybody gets to play (especially our out-of-town visitors) in a short span of two days/two nights.

Football is for the family. I know plenty of dads who join the tournament. Their sons join, too. The grandfather of those sons watch the games. Lola brings the food and drinks. The other grandchildren come and cheer. So does the yaya. Plus the classmates. In football, everybody’s present.

Football is for the young. At the Thirsty Cup, the youngest category is the 6-years-and-under bracket. Yesterday, when I arrived at 10 a.m., I was fortunate to have met the finalists for this category. The champion team was the M. Lhuillier squad, composed mainly of children aged five and six years old. The runners-up? They were the San Roque Football Club who, upon a simple check, appeared much smaller. When I asked why, I found out that they had a three-year-old player and, unbelievably, one who was only two years old! 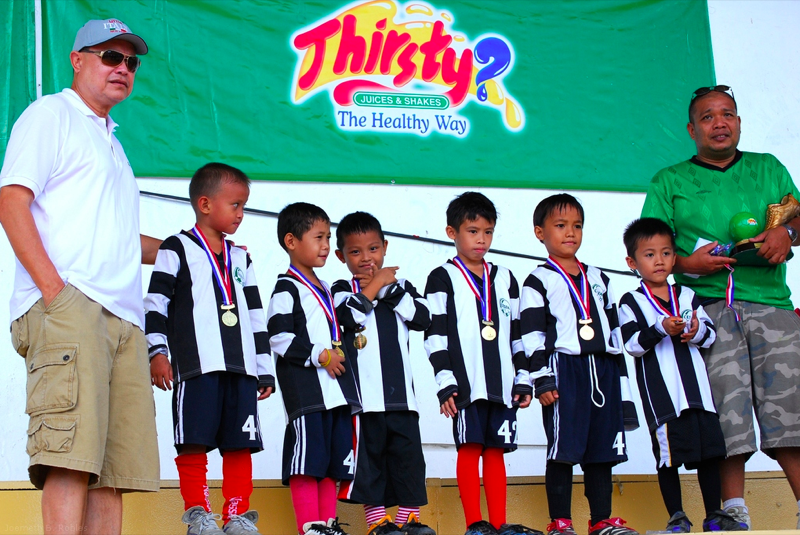 This, I’ve realized, is the superiority of soccer. Since it’s a team sport, one doesn’t have to possess advanced technical skills to join (unlike, for example, tennis or golf). If you can kick, you can join. That two-year-old, Marco Colina (the son of former top player Totot Colina), is the perfect example.

Football is for the once-young. Never mind if football is a highly physical (and injury-inducing) sport where, very often, elbows poke and kicks wallop and shoulders bump, one of the most popular categories is the 40-years-and-older division. The tournament’s oldest player? According to the records, there was one 61-year-old.

Isn’t this amazing? In the same soccer field of the same tournament, a two-year-old toddler kicks and runs like that 61-year-old grandfather.