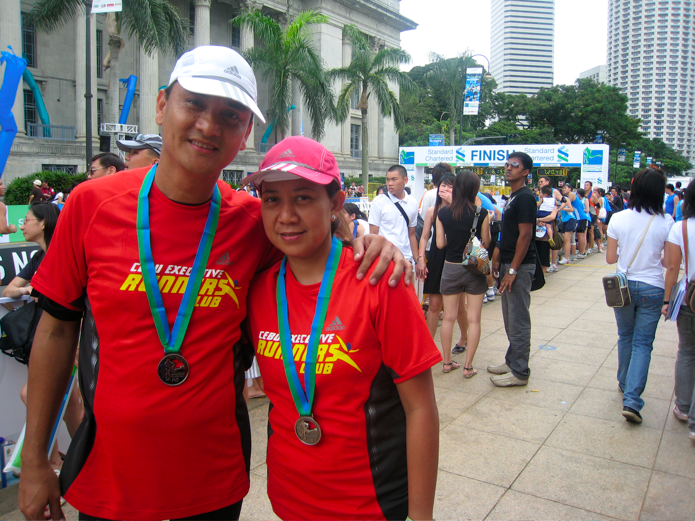 At the 2008 Singapore Marathon

Some prefer a candlelight dinner in Shangri-La. Some “say it with flowers.” Others lavish their spouse with a tiny box, inside of which is a stone that glitters. Some opt for a kiss and an “I love you” whisper. Others, a picnic in Tops or, as our governor herself joked, a stroll inside Plaza Independencia.

Roy and Rosan Trani, two of my closest friends the past three years, prefer a different version of February 14. This Valentine’s Day, they’ll awake at 3:30 a.m. to spend the next waking hours together. Two feet apart. Two feet bouncing. Running.

“Our married life is a ‘wonderful gift’ from HIM, with all the good things we received and material blessings we built through the years,” said Roy. “And now, HE has given us the opportunity to be running together at least once a week (every Sunday), joining full marathons (here and abroad) at least once a year, and more importantly, being a role model to our kids, on how couples (parents) should live and love each other!”

Roy, 48, and Dr. Rosan, 46, have been married for 22 happy years now. One “success formula” they’ve employed in their love-life is a simple yet proven technique that all of us should emulate: The weekly date.

Its formula is as follows = Roy + Rosan + Running. The 3Rs. “We started running together in 2003,” said Roy. “I started this sport as a hobby during the late 1990’s. But when I opted for early retirement in 2003 from a multinational company, I decided to take running as a ‘lifestyle.’ I started to run my first 10K in early 2004, while at the same time Rosan did her first 5K. We later joined the Queen City/Tri-City Runs and had our first experience of the 13K run.”

Was it difficult convincing Rosan? No, said Roy. “Her practice (as a cardiologist) made it logical… for her patients to see a “walk the talk” doctor. Telling her patients to exercise and change their lifestyles and follow her example, were some of the reasons I told her to start to run.”

Since the Trani couple activated the 3R Formula, they’ve been unstoppable. “We’ve joined fun run events in Cebu since 2005 (PHA run, Milo, Timex, DYAB, Seminary Fun Run and many more),” said Roy. “But we only do the 10K runs. I usually run faster than her and would wait for her at the finish line (that was before).”

The 42.195 km. race? “Our first was the Standard Chartered Singapore Marathon in 2008. Our second was in Manila, the Milo Marathon, last July, and the 3rd was in Subic.” The next major one R & R will be running: two Sundays from today… the Standard Chartered Hong Kong Marathon on Feb. 28. “We plan to join two to three marathons every year before we reach 60 years old,” said Roy. “Our dream marathons would be the Safari in Africa and Chicago in the U.S.” 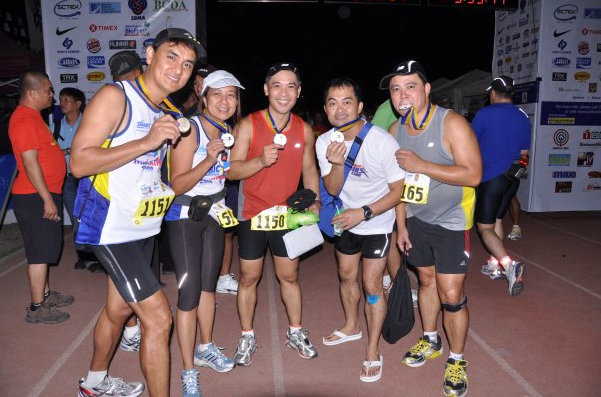 Roy spoke of their schedule. “Since we started running together and with our friends in CERC (Cebu Executive Runners Club), we always start our Sundays with early morning runs at 4:30 a.m… doing 10k to 21K, from 1.5 to 2.5 hours. We run just about anywhere in Cebu, Mandaue, and Lapu-Lapu,” he said.

“We don’t usually talk while running. Last year in the Subic marathon, we prayed the rosary together, especially  when we passed the ‘dark roads’ in SCLEX. We just feel comfortable, ‘peaceful’ running together. It’s good to know that even during this kind of activity, your spouse is with you. Running at the same pace, in the same direction, helping each other cross the finish line.

“One time, she massaged my legs when I suffered pain due to cramps. There was also an incident that I have to wait for her make a pee stop in the middle of a highway along the route… Simple acts of caring but great memories together!”

Finally, this tip from Roy: “Would I recommend this ‘running together’ to other couples? Definitely yes! It’s more than just exercise. It has become part of our ‘love life’ because our Sundays wouldn’t be complete… it’s like going on a date, a running weekly date!” 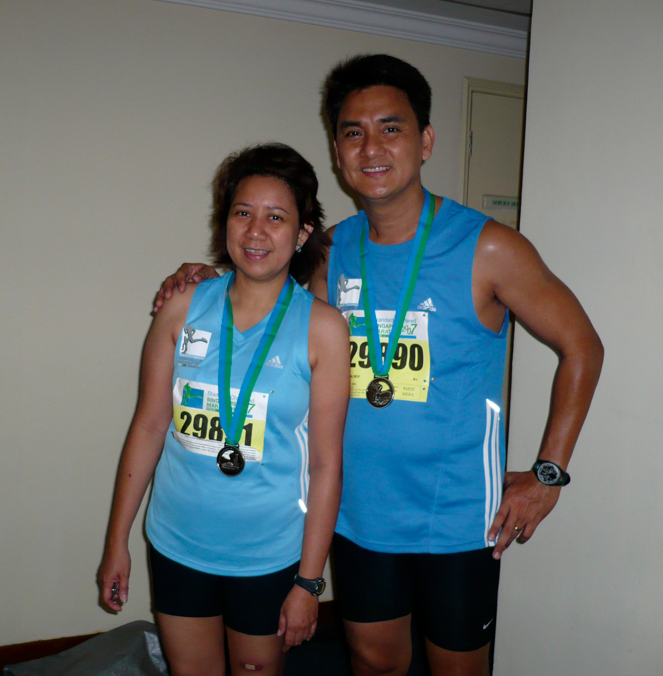 Finishing the 21K in the 2007 Singapore Marathon