What a rollercoaster season for the Spanish superstar. First, he began in perfect form: At the Australian Open, the year’s first Grand Slam event, Rafael Nadal reached the semifinals not having lost a set. Meeting his fellow Spaniard/lefty Fernando Verdasco, they engaged not in a tennis game but in a bloody slugfest of boxing: a five-setter that concluded as the longest match in Oz Open history at 5 hours, 14 minutes. Nadal won. In the finals against—nobody, nobody but…—Roger Federer, it was another classic battle. Rafa prevailed in five sets and was crowned the Australian Open victor. He was superb, impeccable, splendid. 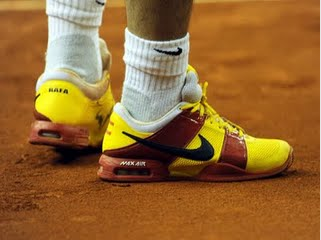 Then………… Bang! The collapse started. At the tournament where he has never lost, on the red clay of the French Open, Rafa was the four-time defending champion. Until he met Robin Soderling in the fourth round—and was beaten. On that May 31 afternoon, Nadal did not only lose the match, he lost much more: his confidence. His topspin. His knees. Suffering from tendinitis, he later withdrew from the most prestigious tennis party on earth, Wimbledon.

Nadal rested for two months. But the damage was done. He was vulnerable. He was no longer Rafa The Invincible. When he returned in August, he promptly lost to Juan Martin Del Potro. Worse, he surrendered the No. 2 ranking (a spot he had held since July 2005) to Andy Murray. Next, at the US Open, once more RN was obliterated by the 6-foot-6 Argentine named Del Potro, 2-6, 2-6, 2-6.

Bad. But here’s worse: At the year-ending ATP World Tour Finals, Nadal played three round-robin matches. His score: 0-3. Not a single match did he win. In fact, RN did not win a single set! Even worst than worse—if there’s ever such a term—Nadal lost his last four matches and lost his last eight sets of tennis.

For didn’t Rafa win the 2008 Olympic gold medal? Wimbledon last year? And the world No.1 ranking? And now, he’s wobbled, stumbled, and faltered? Can he recover? Or has the all-too-physical game of Spain’s muscleman finally damaged his body? Can he retain the No.1 crown and ward off not only Federer but the likes of Murray, Djokovic, Del Potro, Tsonga?

Relax, relax. Nadal, lest we forget, is so much younger than me and, mostly likely, you. He’s only 23. So he’ll recuperate. He’ll reconfigure his game for his body to take less beating. He’ll win the US Open. He won’t disappear.

Proof of his resurgence happened over the weekend. At the Davis Cup, Nadal won the crucial first game against the Czech Republic player, Tomas Berdych, 7-5, 6-0, 6-2. And, in the finale match, he won again. With those wins, it brought his DC record to an extraordinary 14-1. (No thanks to lousy cable TV coverage, we didn’t see those matches.) By week’s end, Nadal and Team España captured the Davis Cup.

Was that significant? To Rafa? Absolutely. Because looking back at his story, in 2004, RN’s tennis career was launched when, as an 18-year-old, he beat Andy Roddick in the Davis Cup final against USA. Since then, he has zoomed to the top. The following year, Rafa won the French Open and jumped from a ranking of 51 to world No. 2 by the end of 2005.

Davis Cup recharges Nadal. And, my guess is, never mind his painful defeats in Roland Garros and the US Open and his exit from Wimbledon—plus the shocking divorce of his parents, Sebastian and Ana Maria, in the middle of the year—all these painful memories have been erased after he raised the Davis Cup trophy.

Because with Nadal, it’s mental. It’s hard to find a tougher, more tenacious and first-class and paramount athlete than Rafa. Except one….